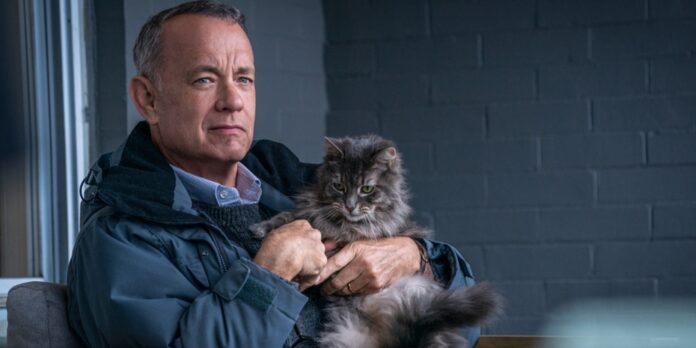 THE STORY – When a lively young family moves in next door, grumpy widower Otto Anderson meets his match in a quick-witted, pregnant woman named Marisol, leading to an unlikely friendship that turns his world upside down.

Marc Forster’s “A Man Called Otto,” an adaptation of the Swedish novel “A Man Called Ove” (already adapted to an Oscar-nominated Swedish film), is a strange film. Not strange in terms of style or plot twists but strange in terms of the contradictions embedded within it. It begins with casting one of our last remaining movie stars – Tom Hanks, aka “America’s Dad” – against type as a big ol’ grump, one who just wants to be left alone to commit suicide in peace. For a film about something so dark as a man wanting to kill himself, it’s as gentle as a summer breeze. The film also features a supporting character, Marisol, who is written as a grating “sassy Latina” stereotype, which should elicit eye rolls from any savvy audience member. But Mariana Treviño, the actress who plays her, is so full of natural warmth that she comes across as a real person instead of a stereotype, a breath of fresh air which cuts through the film’s sweetness to give it a healthy dose of spiky, down-to-earth tartness. And on and on. This is a film that feels at war with itself, the mushy and the hard-edged constantly battling each other for dominance in each scene. Somehow, this actually works in the film’s favor, providing a balance of sweet and sour that works surprisingly well.

Otto (Hanks) is in mourning over his deceased wife. Ever since she died, he has hardened until he’s essentially calcified into his routine of doing regular checks of the neighborhood association, scowling at everyone he sees, and avoiding as much human contact as possible. He finally concludes that he wants to go and be with his wife in the afterlife. Still, before he can kill himself, he’s snapped out of it by a new couple moving into the neighborhood across the street from him. He simply cannot allow their terrible attempt at parallel parking to go unremarked. He takes over the wheel from husband Tommy (Manuel Garcia-Rulfo) as his pregnant wife Marisol watches, and their two daughters delight in Otto’s presence inside the car. Marisol has no patience for Otto’s grumpiness and treats him with all the love and kindness she would like to be treated with as a neighbor, giving him tupperware containers full of home-cooked food and joining him on walks. As time passes, and he grows closer to his new neighbors, cracks start to appear in Otto’s hardened facade, and he learns that maybe there is still a lot to live for after all.

It’s a tale as old as time, how those with a strong enough positive outlook lift cynics up out of depression and teach them how to live and love again through sheer force of personality. It’s one that David Magee’s screenplay does a good job with, even though it can’t entirely escape its familiarity. Otto’s arc has a solid shape to it, with information about his past revealed in carefully spread-out pieces, and Hanks does wonders with it. The truth is that Hanks in this role only feels like against-type casting, given that the character’s “redemption” into a kind, loving person is the whole point of the story. But the actor gives it his all from the very first frame, completely unafraid to be as abrasive as he can be. It is in the gradual reawakening of Otto’s soul that Hanks does his best work, carefully delineating just what triggers all the different facets of Otto’s unhappiness and how they affect how he goes about his business. When he finally commits a wholly selfless act and does something good for a neighbor, Hanks makes you feel all the joy and pain of Otto’s discovery that he was capable of doing such a thing. It’s a finely calibrated performance that is matched beat for beat by Treviño, who gives a star-making performance. Her earthy vivacity and quick wit ultimately elevate what’s on the page, ensuring that Marisol feels like a real woman – a smart, complex, self-reliant woman whose lust for life is the perfect foil for Otto’s hangdog curmudgeonliness. It is a herculean effort that raises the rest of the delightful ensemble to her level whenever they share the screen with her, but Treviño makes it look like the most natural thing in the world.

It’s a good thing, too, because without her, “A Man Called Otto” could just as easily not have worked. The people who help Otto most on his road to recovery are token minorities, they’re primarily to serve Otto’s journey with little agency of their own and clichéd writing on top of it. But Treviño ensures that Marisol, at any rate, does not feel clichéd. Her generosity of spirit is infectious and leads the audience to feel warmer toward the film in general. This is, after all, a film about friendly people banding together to do something nice for someone who needed to be reminded of the world’s capacity for niceness in order to find his own. With two strong performances like Hanks’s and Treviño’s at its center, “A Man Called Otto” earns some space to be a little obvious and trite because they’ve done the work to ensure that the film does have some bite to it. It’s not a film that will change cinema, but it gets the right amount of sour to balance out its sweetness, and that’s a rare enough feat to make it a solid recommendation.