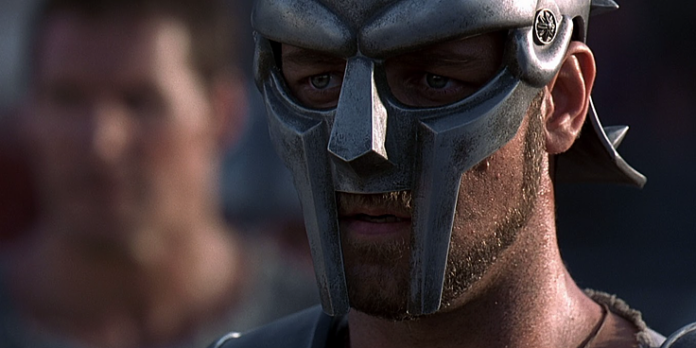 THE STORY – Commodus (Joaquin Phoenix) takes power and strips rank from Maximus (Russell Crowe), one of the favored generals of his predecessor and father, Emperor Marcus Aurelius, the great stoical philosopher. Maximus is then relegated to fighting to the death in the gladiator arenas.
​
THE CAST – Russell Crowe, Joaquin Phoenix, Connie Nielsen, Oliver Reed, Derek Jacobi, Djimon Hounsou & Richard Harris

The large-scale historical epic had died a slow death at the box office in the years leading up to the release of “Gladiator.” Sure, “Braveheart” had won the Academy Award for Best Picture with a very similar story and experience, but not since the Golden Age of Hollywood had a sword and sandals epic reigned supreme. That all changed in 2000 when director Ridley Scott brought “Gladiator” to the multiplexes and made a new generation of filmgoers gaze in wonder at the sheer size of the glory that was once Rome.

A general in the Roman army named Maximus (Russell Crowe) is respected by his men and loved by the current emperor, Marcus Aurelius (Richard Harris). When he is chosen by the emperor to become the new Caesar, he is betrayed by Aurelius’s son Commodus (Joaquin Phoenix). Sold into slavery, and forced to fight for his life now as a gladiator, Maximus goes on an epic and personal journey of vengeance in hopes of confronting the man who took everything away from him.

Ridley Scott has a large canvas to work with here in telling a story which also tries to elaborate on Rome’s politics and its people. However, the story of “Gladiator” is simply reduced down to a story of revenge. It draws very heavily from “Braveheart” in terms of its protagonist’s goals, and the journey that he sets out on to achieve them. Many of the characters utter lines of dialogue steeped in so much melodrama that there are more than a few occasions where it becomes nearly laughable. The film nearly crumbles underneath its own seriousness as the “on the nose” dialogue is uttered throughout.

How does one overcome such a problem? You hire an artistic, yet sensible director such as Ridley Scott. It is due to his work that the film overcomes its cliched story with an artfulness that elevates the material. Ridley Scott employs editor Pietro Scalia to use every trick in the editing book to make the film as engaging as possible during its two and a half hour running time while the cinematography by John Mathieson captures all of the intricately detailed and thought out action scenes. Whether it’s during a small intimate moment, or an epic battle (Such as the opening in the battle of the Roman army against the Germanic tribesmen), “Gladiator” is firing on all cylinders in the technical departments. The visual effects team successfully recreates the Roman coliseum in all of its grandeur, while the costume department dress hundreds of extras in their period clothing. The now famous music by Hans Zimmer is used to evoke all of the emotions from the viewer it possibly can (And does so successfully in my opinion). This is all possible under the watchful eye and guidance of one, Ridley Scott. Here, he gets his chance to make his “Ben Hur” or “Spartacus” and you can’t help but respect him for making all of the pieces come together in such an artful, yet crowd-pleasing way.

Russell Crowe won the Academy Award for Best Actor, for his leading performance in this film and it’s not hard to see why. Without him, all of the above technical merits would be for nothing. It is in his star, that Ridley Scott has the key ingredient for taking the audience along on his epic journey to Rome. Crowe has a charisma and boiling rage inside of him that makes him easy to root for (Especially when the antagonist as played by Phoenix, is written to be so despicable). It is because of the work he turns in under the direction of Ridley Scott, that the film triumphs. It ended up winning the Academy Award for Best Picture in 2000 and dared to ask audiences with all of the machoism it could muster, “Are you not entertained?” Seeing as how much could have possibly gone wrong considering the written material these people had to work with, it’s a small miracle that “Gladiator” entertains as much as it does.