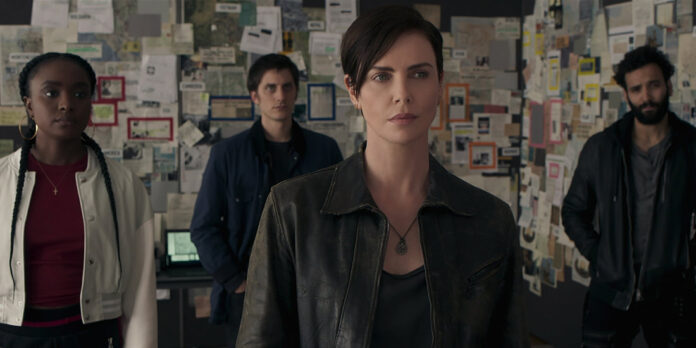 THE STORY – A group of mercenaries, all centuries-old immortals with the ablity to heal themselves, discover someone is onto their secret, and they must fight to protect their freedom.
​
THE CAST – Charlize Theron, KiKi Layne, Matthias Schoenaerts, Marwan Kenzari, Luca Marinelli & Chiwetel Ejiofor

​“The Old Guard” begins with the clatter of bullet casings and questions with an uncertain answer: “Is this it? Will this be the one?” Based on Greg Rucka and Leandro Fernández’s graphic novel of the same name, and directed by “Love & Basketball’s” Gina Prince-Bythewood, Netflix’s “The Old Guard,” about an immortal band of warriors, is a film about the tragedy of living forever – immortality here isn’t fantasized. As much as it offers an action-packed story of hard punches, it also hits the audience with the suffering of its characters and suggests that maybe death isn’t something to fear. It’s a high-octane action-thriller about courage, humanity, and with family at its heart.

Trapped as immortals without explanation, a covert group of four mercenaries has secretly been protecting humanity for centuries. Andy (Charlize Theron) is the boss. Her name is short for Andromache the Scythian which comes from Greek mythology meaning “fighter of men,” and Scythia was a land of nomadic people based in a region of Central Eurasia in classical antiquity. Needless to say, she’s seen a lot of shit. Then there’s Booker (Matthias Schoenaerts), a Frenchman who fought alongside Napoleon, and Joe (Marwan Kenzari) and Nicky (Luca Marinelli) who fought on opposite sides during the Crusades, killed each other and fell in love. They’ve lived for centuries, but the digital age is making it harder for them to hide. When they’re recruited and sent on a bogus mission by an ex-CIA operative (Chiwetel Ejiofor), they realize they’ve become targets. Meanwhile, on a mission in Afghanistan, a young marine named Nile (KiKi Layne) discovers her own immortality. She’s united with this group of highly skilled warriors and is thrown into a battle that forces them all to face their greatest mortal fear.

The film presents a variety of characters, takes them to various locations, and provides insights into a variety of cultures. With Rucka writing the screenplay, he’s able to deliver a full picture around the lore that builds the narrative he created in comic form. And at its forefront are two female heroes, one of whom is a young Black woman. Andy and Nile are the film’s most compelling characters. Andy is given much backstory and we see flashbacks of her fighting over the centuries, providing a walk through history. As the oldest, and as the leader, she has taken on more than the rest and is the one that feels the most defeated. She sees the world getting worse every day and no longer sees the value in what they’re trying to achieve because the world isn’t getting any better. This hopelessness hovers over them until Nile arrives. She brings the spark, the hope that they haven’t had in a long time. The tragedy of immortality is seen most through her as she struggles with the sacrifices that must be made. Booker is afforded decent backstory too, but the film’s biggest fault is the lack of backstory for its gay couple. We are given insight into how Joe and Nicky met and how they fell in love, but nothing more than that, and the scene establishing their romance leaves much to be desired. Together, though, their camaraderie and synchronization during the many action sequences make the film enjoyable throughout and the cast establishes this idea of family, and what it means to each individual, that lies at the heart of the film and in the graphic novel.

Ejiofor isn’t given much to do in his role, but each member of the Old Guard delivers and kicks ass, especially Theron and Layne. Theron proves once again that she’s the action star, and after her stunning and affecting turn in “If Beale Street Could Talk,” Layne showcases that she can excel in even the most high-stakes of narratives (perhaps even giving Theron a run for her money). The film is sleek in both fight scenes and style. Along with the use of an awesome soundtrack, the fight scenes are choreographed to perfection and bring something unique to the modern action film in the weaponry used that provides ancient flare.

Prince-Bythewood’s first film in six years is a vigorous return. “The Old Guard” is a story of brutality, love, loss, guilt, and treachery. Immortal attributes are often saved for villains or Gods, but these warriors feel more human than humans themselves. It’s an emphasis on “otherness”; on outcasts of society who must band together to fight injustice. But like many watching war or unrest, Andy loses hope that what they’re doing means anything; however, slowly she learns that any action, no matter how small, can make the biggest impact – something of deep relevance. “I love that the Old Guard struggle to find their purpose,” Prince-Bythewood says in the film’s production notes. It’s a universal story and another great film about women as warriors. “I love to reframe what it means to be a female,” Prince-Bythewood continues, “and I feel that movies can absolutely change the narrative and the conversation. Courage has no gender. Badass has no gender. It just is.”