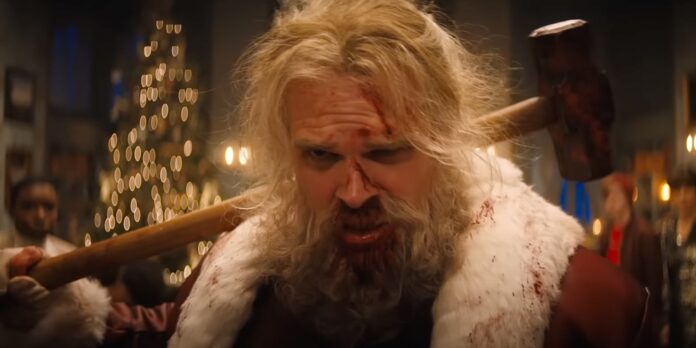 THE STORY – An elite team of mercenaries breaks into a family compound on Christmas Eve, taking everyone hostage inside. However, they aren’t prepared for a surprise combatant: Santa Claus is on the grounds, and he’s about to show why this Nick is no saint.

For such a wholesome, tradition-based time, many filmmakers seem to take perverse delight in making Christmas movies that inject the holiday season with misanthropic humor and unexpected violence. From “Bad Santa” to the dreadful Mel Gibson vehicle “Fatman,” Christmas movies have the potential to be just as shockingly adult as they can be fun for the whole family. “Violent Night” is the latest holiday film aimed squarely at grown-ups. It’s anchored by a committed central performance by David Harbour as Kris Kringle himself, but despite his best efforts, the film that surrounds him is bogged down by an unfunny and ungraceful screenplay.

It’s the most wonderful time of the year, but only some are feeling the holiday spirit. Surprisingly, Santa Claus (Harbour) himself is far from jolly as he drunkenly makes his way from home to home, delivering presents in a far more cynical manner than usual. When he finds himself at an extremely rich family’s estate being taken over by a team of greedy home invaders, it’s up to him to save Noël.

While it’s an obvious pun, the film’s title is also a highly accurate summation of what the audience can expect. Taking place across one long night, the movie is full of several long sequences of gleeful violence, which are undoubtedly the film’s best moments. The action choreography is refreshing and creative, particularly in its use of unconventional winter and Christmas-themed weaponry. For anyone who’s ever looked at a sharp icicle and worried about it falling and maiming them, this is the movie for you. One of the film’s best scenes is both an homage to and a subversion of the booby traps in “Home Alone,” this time depicted in a decidedly R-rated manner. However, the film’s climactic fight with a mini-army of mercenaries facing off against Santa is so poorly lit that it’s practically impossible to see most of the delightfully cringe-inducing violence.

For a film trying to go against the grain in its depiction of the Yuletide season, it can’t help but descend into some expected story beats toward its conclusion. The screenplay takes a hard turn into sentimentality that doesn’t gel with the subversive tone the movie has had up to that point. And such naughtiness doesn’t always yield the humorous results for which the film is clearly aiming. Far too many of the jokes fall completely flat. The film attempts to have “can-you-believe-I-just-said-that” energy, but it mostly just comes across as tiresome.

Thankfully, Harbour rises above the lackluster writing. He’s miraculously able to find variation in the endless scenes of Santa drinking and swearing as he lumbers through the film. And thank goodness, because there are many, many moments where he is the only character on screen, tasked with carrying the film’s energy all by himself. As the unendingly cruel leader of the gang of robbers, John Leguizamo is reliably charismatic in his trademark way. Besides those two pros, the ensemble’s performances mostly range from unremarkable to pedestrian.

For fans of onscreen carnage and engaging fight scenes, “Violent Night” is a worthy addition to the Christmastime movie rotation. It’s much more successful when viewed as an inspired action movie than a gross-out, mature comedy. It’s at its best when the characters stop speaking and start slaying in the new old-fashioned way.