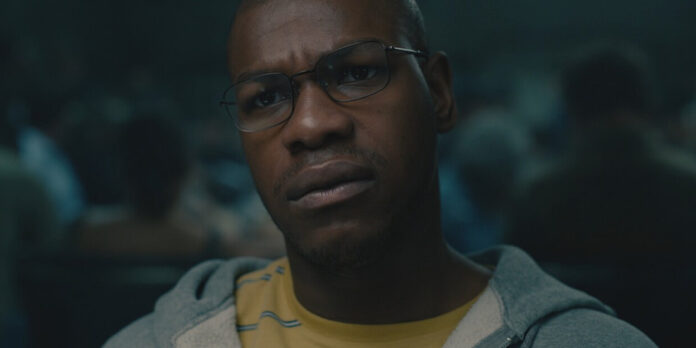 In 2017, PTSD-riddled veteran Brian Easley walked into an Atlanta Wells Fargo and informed the tellers that he had a bomb, which he would detonate if they were not paid the money owed to him by the VA. “Breaking” (previously titled “892” when it premiered earlier this year at the Sundance Film Festival) attempts to tell this riveting, heartbreaking story in a “Dog Day Afternoon” style thriller with intensity and raw, emotional power.

Like “Dog Day Afternoon,” “John Q,” and many other films you’ve likely seen before, “Breaking” boasts one hell of a lead performance, this time from John Boyega (“Small Axe” & “Star Wars“). But unlike “Dog Day Afternoon,” the film is unable to maintain the tension it establishes early on and instead settles for being a tearjerker in place of the riveting thriller it aspires to be. It is sad when it should be angry and focuses almost entirely on one man, yet fails to allow us to dig under his skin to understand better what drove him to this critical moment in his life. That said, “Breaking” remains an above-average thriller that will likely ring out a few tears by the end, thanks to the electric performances from the cast.

“Breaking” doesn’t operate in real-time, but it almost confines the viewer to the bank’s interior with Easley (Boyega) and two bank employees. That decision gives Boyega ample room to showcase his formidable acting abilities. He takes full advantage of the opportunity, portraying Easley as a charming, considerate man who is kind to the bank staff while also showcasing his live-wire energy as a man struggling with mental illness and growing increasingly desperate by the minute as the authorities close on in around him. Boyega’s riveting, emotional performance carries the film, especially considering the screenplay doesn’t give the viewer all that much insight into Easley besides the fact that he loves his daughter.

There are a few flashbacks here and there that provide a glimpse into the way the VA failed to care for Easley when he returned from active duty, but they are rare and all too brief when they do occur. On the one hand, placing most of the narrative in the present helps maintain dramatic tension as Easley gambles with his life for what he believes is only fair and right (to get what the United State government owes him). On the other, viewers are robbed of a greater understanding of what got Easley to this point and the sense of anger the film should engage with regarding how the US government treats its veterans. Nevertheless, when the film focuses on the societal failures that led Easley to rob that bank, this commentary is typically told bluntly through dialogue by the characters instead of shown to us in any sort of visually stimulating or enlightening manner.

The late Michael K. Williams (“The Wire”) and Nicole Behari (“Miss Juneteenth“) deliver the brunt of the film’s attempt at social commentary as a hostage negotiator and a bank manager, respectively. They’re convincing opposite Boyega and sell every scene they’re in with gravitas. Williams is particularly heartbreaking as a former veteran himself who wants to de-escalate the situation peacefully while everyone around him is pushing for shoot-to-kill orders. Occasionally, the film does deliver some political commentary beyond its direct dialogue. An early shot of Easley trudging through a homeless encampment next door to the bank is particularly affecting in selling the film’s message, but it’s all too fleeting and doesn’t measure up to the performances being given by the cast.

Without as much of a focus on the political aspects, instead, “Breaking” wants to function as a top-notch, white-knuckle thriller. And it mostly succeeds. The film is well-lit, well-framed, and well-edited. There is some clever sound design, playing on the similarities between gunshots and the sound of someone banging on a door, and for decent stretches, the film tightens its grip on the audience’s anxiety and fear for the safety of everyone in the bank. At the same time, when the film is so committed to concentrating on the present (it is almost a single-location piece), there are only so many beats and shot setups the film can opt for before the whole thing starts feeling repetitive. By the time “Breaking” reaches its conclusion, it’s no longer stressful. Still, when the inevitable climax comes, it is startling and moving. Even if “Breaking” doesn’t quite stick the landing as an enraged political call to action or an edge-of-the-seat thriller, it is still effective at eliciting tears from its intended audience.

Easley’s story deserves to be told, and although “Breaking” doesn’t give him the best movie his life warranted, it does make a valiant effort. It falls short in several aspects, but it is competently made, with strong turns from Boyega, Beharie, and Williams in what will go down as one of the late great character actor’s final on-screen roles. Boyega continues to develop into one of our most vital actors working today, constantly showing us new depths of his immeasurable talent. There is enough here that works to make “Breaking” more than worth seeing, even if the film sometimes feels like a missed opportunity to have been even more profound and more influential in its statement.