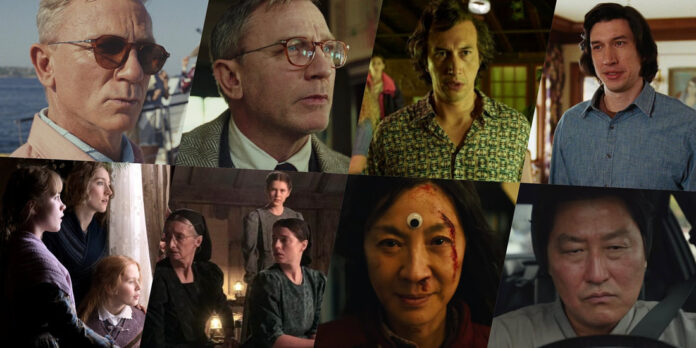 ​If anyone remembers the 2021 awards season for anything other than Oscar night’s most violent moment, they may remember it as 2018 on steroids. Like with 2018, the 2021 Oscars were a sound and decisive rejection of artsy, critically embraced movies and performances in favor of more populist, mainstream, “feel good” fare in almost every major category. The only difference was that winners like “CODA” and Jessica Chastain had far less backlash than winners like “Green Book” and Rami Malek in “Bohemian Rhapsody” – and almost no one cared about the actual award results by the end of the 2021 Oscars.

The only long-term benefit to 2018’s embarrassment of winners was that the pendulum swung the other way and then some in 2019. Thanks to the 2019 season’s embarrassment of riches and the ultimate triumph by the likes of “Parasite,” that year may be the most successful award season in recent memory – and not just because of the horrific endings to the 2020 and 2021 seasons.

If 2021 was just like 2018, then by that pattern, 2022 should end up just like 2019. In fact, there are already some very scary, or perhaps very promising, parallels between this season’s presumed contenders and the biggest ones from three years ago.

“White Noise” = “Marriage Story”
Like in 2019, the 2022 fall festival season will kick off in Venice with a film from Noah Baumbach and Netflix, starring Adam Driver. But while “Marriage Story” had Driver and Scarlet Johansson go through the wringer of divorce, in a movie loosely inspired by Baumbach’s own separation, “White Noise” has Driver and Greta Gerwig go through the experience of surviving an “airborne toxic event” in their hometown, in a movie based on Don DeLillo’s novel.

“Marriage Story” set the high bar for the rest of the season to come, even if it didn’t sustain that momentum to the end. “White Noise” might not make that kind of splash on Venice’s opening night, though one can hope whatever noise it makes is a promising omen.

“Babylon” = “Once Upon a Time In Hollywood”
As was the case in 2019, 2022 has a major epic coming soon to theaters about Hollywood’s transition into a new era and the last gasp of a dying old era – and both happen to have a past Oscar winner directing both Brad Pitt and Margot Robbie.

Yet while Quentin Tarantino recreated the late 60s with Pitt and Robbie in “Once Upon a Time In Hollywood,” Damien Chazelle is going back to the 1920s, the dawn of talkies and the end of the silent movie age. But in this case, there’s bound to be less controversy about whether preseason Best Actress favorite Robbie has enough lines. Though if early comparisons to “The Wolf Of Wall Street” bear fruit, there may be more than a few other controversies to balance that out.

“Empire Of Light” = “1917”
Compared to 2019, 2022 has past Oscar winner Sam Mendes returning with a movie tailor-made for the Academy. This time instead of a one-take war drama in “1917,” Mendes’ “Empire Of Light” has award-friendly elements like a love story, England in the 1980s, an ode to cinema itself, and Olivia Colman.

But while “1917” was the last contender to get screened in 2019 – and still might have pulled out the big wins if not for “Parasite” – “Empire Of Light” will get a much earlier first test in Toronto and likely in Telluride.

“Glass Onion: A Knives Out Mystery” = “Knives Out”
Once again, just like 2019, 2022 will have Rian Johnson unveil an all-star mystery headlined by Daniel Craig in Toronto before it is revealed to general audiences months later.

But unlike the original “Knives Out,” its sequel will go wide on Netflix instead of in theaters, so it won’t be able to match its predecessor’s success at the box office. Yet if “Glass Onion” can make an early impression in Toronto as its predecessor did, maybe it too can lurk around on the awards season bubble and be on the right side of it for more than just a screenplay nomination.

“She Said” = “Bombshell”
Similar to 2019, 2022 will feature a movie that retells one of the origin stories – and one of the biggest institutional scandals – of the #MeToo era. Yet the style and tone of “She Said” promises to be more like “Spotlight” than the flashier and far more divisive “Bombshell” was three years ago.

“Women Talking” = “Little Women”
Much like 2019, 2022’s biggest awards season movie about women may be one helmed by an actress-turned-director adapting a novel. But while Greta Gerwig’s version of “Little Women” was merely the latest adaptation of that famed novel, Sarah Polley adapts a far more recent and perhaps far more incendiary book about a group of religious women contending with sexual assault in their colony.

Past Best Director nominee Gerwig was famously overlooked three years ago, despite “Little Women’s” other major Oscar nominations. Yet if “Women Talking” keeps everyone talking all season, there might be more room for Polley to get her very first nomination.

“Top Gun: Maverick,” “Black Panther: Wakanda Forever,” or “Avatar: The Way Of Water” = “Joker”
2022 will probably have at least one billion-dollar Best Picture nominee, just as 2019 did – though it may be a question of which one. “Top Gun: Maverick” already has record-setting numbers in its favor, while both “Black Panther: Wakanda Forever” and “Avatar: The Way Of Water” have the pedigree of Best Picture nominated predecessors to stoke expectations beyond the box office.

Nonetheless, none of them are bound to have the controversy, heated arguments, or perhaps even significant wins that “Joker” pulled off three years ago. Yet, for one reason or another, the pressure will still be on to nominate one or more of them anyway.

Michelle Williams = Laura Dern
Like 2019, 2022 may have a Supporting Actress race dominated wire-to-wire by a long overdue, highly beloved past nominee whose time might now finally come. Three years ago, that obvious winner was Dern for “Marriage Story,” and this time, all eyes are on four-time nominee Williams for Steven Spielberg’s “The Fabelmans.”

On paper, Spielberg’s loosely autobiographical tale of his childhood, his love of cinema, and his parents’ separation is tailor-made for the Academy, with Williams perhaps finally breaking through as well. Even if “The Fabelmans” falls short in other major categories, Williams could still provide it with a collective win, as Dern did for “Marriage Story” and like Ariana DeBose did for Spielberg’s “West Side Story” just last year.

Then again, after Caitriona Balfe was snubbed at the very last minute for a supposedly similar role in the also semi-autobiographical “Belfast,” maybe no one should engrave Williams’ name quite yet.

Naomi Ackie = Renee Zellweger
2022 may, like 2019, have a Best Actress winner who plays a famous but troubled and ultimately tragic singer. Of course, Zellweger’s win for “Judy” was hardly the only recent case of a musical biopic Oscar winner, especially with Jessica Chastain winning for “The Eyes Of Tammy Faye” last year.

In that context, Ackie contending or winning as Whitney Houston in “I Wanna Dance With Somebody” could be somewhat predictable. But if that doesn’t pan out, voters still have “Elvis’s” Austin Butler to give them their musical biopic fix in Best Actor.

“Killers Of The Flower Moon” = “The Irishman”
This may already be one way where 2019 and 2022 turn out very differently. But until reports and unconfirmed rumors grew that Martin Scorsese’s “Killers Of The Flower Moon” would be pushed back to 2023, 2022 looked to have another Scorsese streaming film at the center of the race, just like (you guessed it) 2019 did with “The Irishman.”

In this case, “Killers Of The Flower Moon” is from Apple instead of Netflix, has Robert De Niro in more of a supporting role, and likely isn’t over three hours long. For the moment, it looks like everything else about it will stay under wraps until next year – but if something changes, then 2022 could have its own “The Irishman” in the mix after all.

“Everything Everywhere All At Once” = “Parasite”
And finally, like 2019, the 2022 Oscar race might end up being defined by a movie that opened well before the fall festival season.

Much like “Parasite,” “Everything Everywhere All At One” is a genre-defying, rapturously adored movie that has almost no similarities with a so-called traditional Best Picture – especially the previous year’s winner. Even so, “Parasite” defied every possible odd and Oscar stat to make history in what may have been the last moment of pure joy before the world fell apart weeks later due to COVID-19.

The even wilder and more untraditional “Everything Everywhere All At One” would be a far more unprecedented contender without the artsy stamp of Bong Joon-ho, a win at the Cannes Film Festival, darker themes about class warfare, or multiverse antics that resemble anything from Marvel. But like with “Parasite,” critics will surely push this long and loud throughout the season – and the longer they make it stick around, the better the chances of the best shocking Oscar ending in three years might become.

Do you agree with these comparisons? What are your current Oscar predictions for this year? Please let us know your thoughts in the comments section below or on our Twitter account and be sure to check out the Next Best Picture team’s latest Oscar predictions coming soon on September 1st.