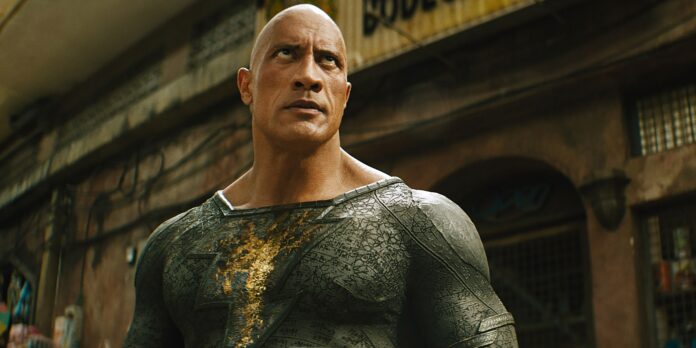 THE STORY – In ancient Kahndaq, Teth Adam was bestowed the almighty powers of the gods. After using these powers for vengeance, he was imprisoned, becoming Black Adam. Nearly 5,000 years have passed, and Black Adam has gone from man to myth to legend. Now free, his unique form of justice, born out of rage, is challenged by modern-day heroes who form the Justice Society: Hawkman, Dr. Fate, Atom Smasher and Cyclone.

It’s been said over the years that Dwayne “The Rock” Johnson is a real-life superhero. With his hulking build, likable personality, and tremendous charm, he’s seen as a role model by many for what success and excellence looks like in today’s society. So, it’s amusing to see him take on the role of one of the DC Universe’s antihero comic book characters, Black Adam, in director Jaume Collet-Serra’s “Black Adam.” Set within the same universe as “Shazam” with similar powers as that film’s superhero, how do Johnson and his “Jungle Cruise” director Collet-Serra fare on their second outing together?

Five thousand years ago, in the ancient city of Kahndaq, Teth-Adam (Dwayne Johnson) was imprisoned, and in the years since then, tales of his return and statues built to worship his forthcoming as the hero that will deliver the city and its people to promise once again are spread all over the world. In modern times, he is finally awakened in an overrun Kahndaq by a university professor and resistance fighter Adrianna Tomaz (Sarah Shahi ), as “Black Adam,” an antihero with a range of abilities including strength, speed, lightning, and flight. A fish out of water story (in its own way), Adam’s disregard for human life leaves many dead (albeit, they’re all bad guys) in his path, but it draws the attention of the Justice Society of America led by its leader Carter Hall aka. “Hawkman” (Aldis Hodge), who has the power of flight from his metal wings. He’s joined by Albert “Al” Rothstein, aka. “Atom Smasher” (Noah Centineo), who can control his molecular structure and grow in size (and thus, strength), Maxine Hunkel, aka. “Cyclone” (Quintessa Swindell), who can control wind and spin at high speeds to generate sound, and Kent Nelson, aka. “Doctor Fate” (Pierce Brosnan), a sorcerer with a magical helmet that can alter reality and see into the future. Together, the group must try to stop Adam from causing any further harm and teach him how to be a hero to the people of Kahndaq before the criminal organization known as Intergang, led by Ishmael Gregor (Marwan Kenzari), finds an ancient artifact which will give him the power to challenge Black Adam and continue to enslave the people of Kahndaq.

“Black Adam” struggles to find its footing through the first act. Clunky exposition (with a twist that was already heavily spoiled in the film’s marketing), cheesy dialogue, and baffling moments of strange behavior (I’ve never seen bad guys so resistant to shoot someone in a movie before) from the characters, whether it’s meant to be intentionally funny or not. Most of the film’s unfunny humor comes from Adrianna’s electrician brother Karim (Mohammed Amer). But once the Justice Society of America gets introduced into the story, things become more vibrant and invigorating as Black Adam’s brute force, stoic demeanor, and bluntness clash with the group’s moral values and priorities when it comes to saving the world. Aldis Hodge may look ridiculous in his Hawkman costume, but his scenes opposite Johnson and Brosnan bring more depth to the character making him the stealth MVP of the film and someone fans will likely want to see more adventures from in the future alongside the other members of the Justice Society. The group may sometimes feel like an “X-Men” knock-off, considering their abilities, but they’re all given likable performances by the cast and written in a manner that’s never off-putting. Watching them work together as a team to protect the people of Kahndaq from a foe much greater than them is certainly a lot of fun, but the most genuine surprise of all might be Brosnan, who plays a sorcerer with a magical helmet called the Helmet of Fate which has the power to see into the future. Yes, the “Doctor Strange” comparisons will surely abound, but Brosnan makes the character his own. His Doctor Fate creates a heartwarming relationship with Hawkman that pays off in dividends by the film’s end.

Johnson has never been one to stretch himself as an actor all that often. In a way, the role of Black Adam requires him to ditch his charismatic charm and quippy one-liners (although the character does gradually take this on as he develops his own catchphrase thanks to the help of Amon) in favor of a stern, omnipotent being who takes everything way too seriously. Much of the film’s humor comes from his carefree attitude toward the cost of human life as he evaporates, eviscerates, and eliminates his enemies without mercy. It’s an interesting concept to follow a superhero who is all super and no hero within the DCEU, but by the end, Johnson wins the audience over as we get to learn about Adam’s past and see how he’s grown over the course of the film. Johnson’s physicality should never, and I don’t think it has ever been called into question with any role he’s taken on, and although much of Black Adams’ powers are enhanced by visual effects, even seeing the mighty Johnson fill out the lightning bolt superhero outfit with his commanding screen presence is enough to convince you he’s one bad, intimidating powerhouse.

“Black Adam” clocks in a few minutes past the two-hour mark. Although it doesn’t tell the most exciting story it could’ve given the opportunities afforded by the inclusion of such a dynamic lead character; it at least doesn’t overstay its welcome. Its values and more profound questions on Adams’ place as “a hero” within this universe are touched on but not explored thoroughly enough to warrant this being a groundbreaking film within the constantly expanding superhero genre. However, it does provide enough likable characters, and stunning action sequences backed by solid visual effects work to make it a fun time at the movies. What it’s sorely lacking is a stronger antagonist, as Kenzari’s Ishmael Gregor is a bland character with even blander motives (although his CGI Sabbac transformation in the third act is another chance for the visual effects to show off in a grandiose manner). Johnson is very much the star of the show, but the Justice Society of America nearly steal the movie right from underneath him as the film gives them a satisfactory introduction, leaving us wanting more from all of them by the end. And Warner Bros. does not disappoint in this department as they also provide the most earth-shattering post-credits sequence for a DCEU film in quite some time. It may not be the most unique or overall best superhero movie to come out of Hollywood but a strong enough foundation has been built, which could leader to far more interesting stories for these characters down the road.