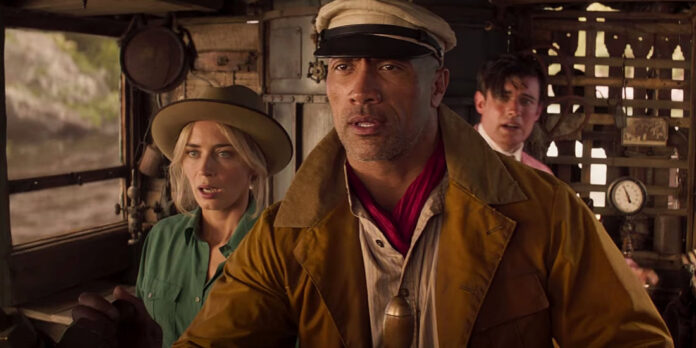 THE STORY – Dr. Lily Houghton enlists the aid of wisecracking skipper Frank Wolff to take her down the Amazon in his ramshackle boat. Together, they search for an ancient tree that holds the power to heal — a discovery that will change the future of medicine.

​​They don’t make many old-school adventures anymore, which is why we still see so much love for franchises like “The Mummy,” “The Pirates of the Caribbean,” and “Indiana Jones” all these years later. Writing a review of Disney’s latest attempt at a swashbuckling film, “Jungle Cruise,” without constantly referencing those other three series is tricky because it’s so clearly trying to emulate them. While this doesn’t come close to the heights of those beloved films, “Jungle Cruise” manages to coast on the charm of its two leads, making it a fun, if somewhat forgettable, adventure.

Inspired by the Disneyland ride of the same name, “Jungle Cruise” follows Dr. Lily Houghton (Emily Blunt) as she embarks on a journey to find the famed “Tears of the Moon” deep in the heart of the Amazon. She enlists the help of riverboat captain and pun enthusiast Frank Wolff (Dwayne Johnson), who promises to help Lily complete her adventure. Lily also drags her younger brother McGregor (Jack Whitehall) with her, who would rather not be along for the ride. The trio sets out to find the “Tears of the Moon,” which legend says can heal all ailments. They face off against German Prince Joachim, played with glee by Jesse Plemons, who seeks to beat our heroes to their prize.

Blunt and Johnson are two of the most lovable and charismatic movie stars around, so their pairing was bound to be at least the one enjoyable aspect of this movie. They deliver on that promise here with great comedic chemistry as they embrace the film’s pulpy, slightly campy style as if they could’ve come right out of a 50s adventure film. Starting off at each other’s throats and at odds with one another, their trust, respect, and affection for the other grows as they hold the film together as partners in adventure. In fact, for the most part, the performances from the cast were the best part of the film. Jesse Plemons continues his streak of being excellent in everything he’s a part of. His over-the-top, goofy, villainous Prince Joachim continues to showcase his range and underutilized comedic talents. He could’ve been used much more in the film as he disappears for long stretches at a time. However, when he is on screen, he steals every scene he’s in. Paul Giamatti shows up briefly here too as an over-the-top Italian harbormaster (his accent is all over the place) who Frank owes money to, reminding us all that we need more Giamatti in the movies.

From the moment the film begins, it’s clear that “Jungle Cruise” wants to be the next “Pirates” franchise. It even opens with a literal image of a pirate ship (strangely backed by a rendition of Metallica’s “Nothing Else Matters” on acoustic guitar). That’s not inherently a bad thing! Many would enjoy having another exciting epic-action-adventure-comedy-blockbuster franchise to fall in love with. Unfortunately, “Jungle Cruise” borrows far too much from that series, making it feel more like an imposter than a successor. Without going into spoilers too much, it steals major elements from “Pirates,” including undead villains (making poor use of Édgar Ramírez as a CGI’d conquistador with very little character development). Other details feel far too familiar, like the brother and sister duo partnering up with the handsome hero to help complete their journey, which is exactly like “The Mummy.” There’s so little that feels inherently new here.

Blunt and Johnson’s charismatic and comedic pairing may be the film’s greatest strength, but it may also be its undoing. There’s a lack of seriousness to “Jungle Cruise” that prevents it from ever feeling genuinely grounded in the real world. Making matters worse, the film is drowning in CGI. This marks director Jaume Collet-Serra’s biggest film to date with the most considerable amount of visual effects work he’s ever had to apply. Disney isn’t exactly known for the same gritty realism he brought to films such as “The Shallows” or “The Commuter,” but even compared to Marvel movies, the visual effects here are excessive. They distract from all of the other elements the film is doing well, such as the production design, practical effects, and work between them the two leads. It’s another thing that undermines “Jungle Cruise” and prevents it from having any sense of believability or even an epic scope, as it’s clear much of this was shot on soundstages with CGI backgrounds.

Despite its numerous flaws, “Jungle Cruise” still manages to scratch a particular itch. Without many true adventure films out there, it’s hard not to have a good time with Dwayne Johnson and Emily Blunt sailing along the jungle river. There’s plenty to complain about, and it won’t make a lasting impression, but I’d be lying if I said I didn’t have a good time with the movie. I suspect many families will too! The silly bombastic action, the big orchestral score from James Newton Howard, and the beautiful leads soaring down a river on an adventure that mixes period history with fantasy? I guess I’m a sucker for fluff.