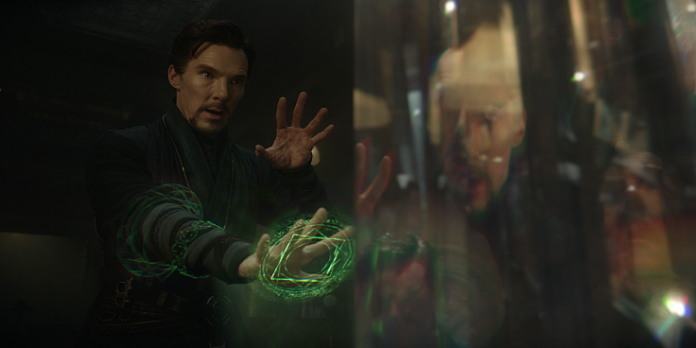 THE STORY – Dr. Stephen Strange’s (Benedict Cumberbatch) life changes after a car accident robs him of the use of his hands. When traditional medicine fails him, he looks for healing, and hope, in a mysterious enclave. He quickly learns that the enclave is at the front line of a battle against unseen dark forces bent on destroying reality. Before long, Strange is forced to choose between his life of fortune and status or leave it all behind to defend the world as the most powerful sorcerer in existence.
​
THE CAST – Benedict Cumberbatch, Chiwetel Ejiofor, Rachel McAdams, Benedict Wong, Michael Stuhlbarg, Benjamin Bratt, Scott Adkins, Mads Mikkelsen & Tilda Swinton
​
THE TEAM – Scott Derrickson (Director/Writer) & C. Robert Cargill (Writer)
​
THE RUNNING TIME – 115 Minutes

​”Doctor Strange” marks another bold leap in the Marvel Cinematic Universe as the world and characters of “Doctor Strange” are unlike anything else we have seen before. Mixing the mythical aspects of “Thor,” with the character arc of “Iron Man” and borrowing its visuals heavily from “Batman Begins” and “Inception,” the film is a trippy visual experience that I highly recommend you to see in IMAX 3D if you can. However, a film is not all about the visuals as “Doctor Strange” suffers from a poor script that leans too heavily on genre tropes and leaps in logic present themselves in abundance.

Dr. Stephen Strange (Benedict Cumberbatch) is an arrogant surgeon whose life changes for the worse when a car crash leaves his hands useless. After exploring all different forms of Western medicine and pushing away the one person who cares about him the most in Christine (Rachel McAdams), Strange takes a leap of faith and travels to Asia seeking a different kind of medicine. What Strange discovers is an ancient order run by “The Ancient One” (Tilda Swinton) where they protect the Earth from fantastical threats using mind altering techniques of magic to aid them in their fight. With the aid of the Ancient One’s student, Karl Mordo (Chiwetel Ejiofor), and mystic art’s librarian, Wong (Benedict Wong), Strange must choose between the life he once knew and the one he is still exploring in an effort to defeat an evil previous student of The Ancient Ones known as Kaecillius (Mads Mikkelsen) who is looking to destroy all life on Earth through dark and magical means.

The visuals in “Doctor Strange” are like watching a film through a kaleidoscope. It’s fun, weird and (I hate to say it) magical in how refreshing it is to see a film runaway with its fantastical elements as this one does. While I may not have understood a lot of reasoning behind the magic or its limitations it was still a lot of fun and walking out of the theater I felt like I had come close to seeing a real life acid trip on film.

Where “Doctor Strange” fails is in its “style over substance” mentality. This is a screenplay which needed a lot more polishing as there are a ton of plot holes that hurt the overall film for me. The hospital scenes defy logic as you’re constantly left wondering who is paying for these intense procedures and why is Christine always able to drop what she is doing to help Strange? Christine is the love interest who’s only existence is to humanize Strange and as a result, she is underwritten and there are many times where I question why she likes Strange in the first place. Due to an uneven American accent, Cumberbatch is as flawed yet as admirable as the character he plays. Mads Mikkelsen is also underwritten as he is simply given the whiny student role who wants all the power now. Chiwetel Ejiofor is not at all interesting until the end of the film. Thank god though for Tilda Swinton who’s monologue on death and time is quite honestly the screenplay’s high point. Bottom line is that the film needs a focused sequel to explore these characters more as they are more caricature than fully fleshed out human beings.

As a result of these problems, the screenplay is not as daring as for films visuals. Instead, this is a screenplay where we can recognize every character beat, every genre trope and yet somehow the screenplay manages to leave out one of the key important elements of this film and that is time. How long was Dr. Strange in Asia? Was it years? Was it months? The film never tells us and as a result, one day Dr. Strange is not very good at magic and the next thing you know, he is phenomenal at it. This missed concept of time is also a huge problem when he finally sees Christine again and all of a sudden she is ready to save his life and be there at his side. It’s simply phony and unconvincing.

A few more bright spots (So that Marvel fanboys don’t try to eviscerate me) are the fun Michael Giacchino score (When it’s not sounding too much like his main theme from the “Star Trek” series) and one of the most creative final confrontations I’ve ever seen in a superhero film. It’s funny (And there is quite a bit of good humor in this film) and totally clever in its execution. I guess what I’m ultimately trying to say here is that “I’ve come to bargain.” The film is not perfect, nor is it one of the best films in the Marvel Cinematic Universe. It has its bright points and its low points, but overall “Doctor Strange” is an enjoyable good time with some mind-bending visuals that is at least worth a look in the best format possible.