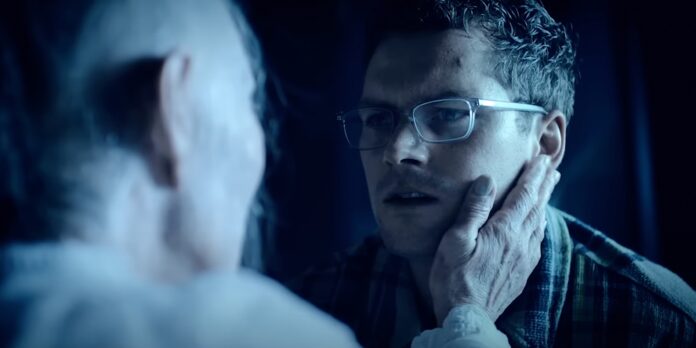 THE STORY – After a series of tragedies, Robert moves with his wife back to her childhood home. After he discovers an old portrait of a man who looks like him, he goes down a rabbit hole to discover the identity of this mysterious doppelganger.

Breaking new ground is tough to do in the deeply saturated horror genre. Nearly everything’s been done before as variations of different stories pile on top of one another. So it’s not inherently a knock against “The Visitor” to say that we’ve seen numerous versions of this same sort of story time and time again. The unfortunate part, though, is that there’s little that this film does to stand out amidst this crowded field of films, especially during the Halloween season. There are creepy doppelgangers, strange townsfolk, and the deep sense that something is amiss – but no memorable twist or perspective to hold onto. Ultimately, “The Visitor” is a forgettable, harmless horror flick that never really takes off.

After Maia’s (Jessica McNamee) father dies, she and her husband Robert (Finn Jones) move from London to her childhood home in America. To Robert, something is off as soon as they arrive in Briar Glenn. There’s a deep sense that things are unsettled, and Robert can’t shake it. While clearing out Maia’s father’s home, they come across a painted portrait of a man who looks exactly like Robert. It’s a bit weird, but the two shrug off the strange coincidence and move on. That is until people around town can’t stop looking at him strangely too. Clearly, something is going on, but no one really acknowledges it. Soon, Robert discovers more images that look exactly like him, but now he’s just feeling crazy. Nightmares begin, there are disappearances around town, and still, Maia doesn’t buy into Robert’s fears.

Things may be unsettled for Robert, but that rarely translates for the audience. Director Justin P. Lange (“The Seventh Day“) fills “The Visitor” with a slow-moving, moody vibe, aiming for an atmospheric piece rather than one filled with jump scares. While the images are well shot, and the pace is admirably restrained, the story is too flimsy for the atmosphere to prop up. Perhaps it’s because we’ve seen this play out dozens of times in similar stories. Or maybe it’s simply because the tension just isn’t cultivated well? The story feels pretty empty and leaves us with more questions than answers: What’s keeping Robert there? Why doesn’t he do more to challenge the strangeness he sees around town, or as he sees more and more images of himself around town? The tension never truly takes root, staying too low-key until the last two minutes when it’s too late to turn things around.

“The Visitor” aims to tackle big questions about existence and control over our lives, but the questions feel trite when we’re three steps ahead of Robert throughout the story. As Maia and others gaslight Robert into thinking there’s nothing bizarre going on, it’s simply not believable enough. Confusion never seeps into the audience, so frankly, we’re not as unsettled alongside Robert. Jones gives a satisfactory performance considering what he’s been given, but it’s a one-note role on the page, leaving him with little room to elevate it. The same goes for McNamee, who doesn’t get much to do here. While the movie’s short runtime was a wise decision, the pacing is so slow that there’s no hiding from the somewhat empty plot. The big inevitable twist at the end isn’t even shocking, though it’s the only time the movie picks up any excitement.

With echoes of “Rosemary’s Baby,” “Hereditary,” and even a dash of “Get Out,” “The Visitor” can’t measure up to the films that have tackled these themes already. It’s wisely kept at a small scale, never veering into ridiculous territory with silly monsters or things of that nature, but it’s still weighed down by the typical, to-be-expected cliches of the genre, ones you can see coming from a mile away. A languid pace and hollow plot make it a well-shot misfire that’s not necessarily a terrible film by any means, but just one of a dozen forgettable horror films that seem to come out yearly with very little staying power.