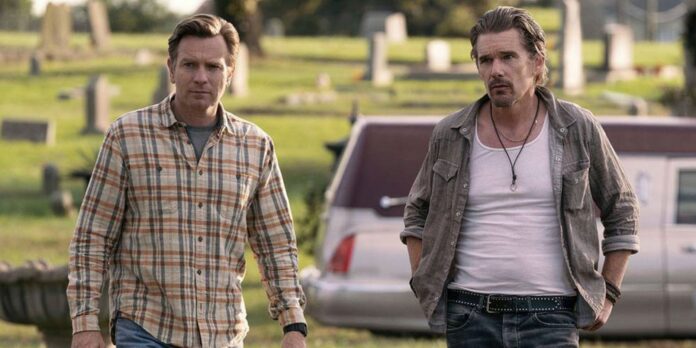 THE STORY – Half-brothers Raymond and Ray attempt to live in the shadow of a terrible father. When they reunite at his funeral, the two of them use it as a chance to reinvent themselves.

The death of an estranged parent is sure to give rise to complicated emotions, no matter the cause of the estrangement. In “Raymond & Ray,” director Rodrigo García (“Four Good Days“) explores how two half-brothers react to the death of their father, whom they both had a complicated relationship with. As the two men go about the funeral preparations and the burial itself, they come to terms with the events of decades before, strengthened by their distressed bond.

The film opens with Raymond (Ewan McGregor) driving miles away from home to let his half-brother know about the news of their father’s death since he couldn’t reach him over the phone. Ray (Ethan Hawke) answers the door shirtless, tattoos on display and gun in hand. He’s a trombone musician who has been clean for seven years, drifting between jobs and meaningless relationships in the aftermath of his wife’s death. It’s clear he’s fallen on hard times as the after-effects of his relationship with his father during his childhood have carried over into his adulthood. However, the same is true of Raymond, as he isn’t meant to be driving because of a DUI on his record. Still, he wants to ask his brother to attend the funeral with him both for these practical reasons and for emotional support as he deals with the troubled history between him and his father. Ray is much more open in his hatred of his father, while Raymond is doing his best to keep things together despite harboring a deeper transgression his father once committed towards him. Raymond and Ray are half-brothers who couldn’t be more different, but they’re bonded by the poor experiences they had with their father growing up. When they arrive at the town their father lived in, they’re surprised to hear from everyone they meet what a great guy their dad was. From his ex-lover Lucía (Maribel Verdú) to his nurse Kiera (Sophie Okonedo), people are full of praise for a man they barely recognize. However, his strange requests for his funeral lend an absurdity to the film, one of which is that his sons physically bury his coffin themselves, a final jab at the two sons he continually messed with his entire life until the end.

In the process of planning and going through with the funeral, the brothers learn a lot about their father they couldn’t have expected due to their experiences with him, which keeps the audience on their toes. Raymond and Ray have different approaches to coming to terms with their childhood in order to move forward with their already broken lives. Ray gave up on their father long ago, while Raymond’s anger boils below the surface of his stable facade. Revelations about the two men’s family situations and how their own messed-up relationship with their father has influenced their adult lives slowly reveal themselves as the film unfolds. The film covers a time period of fewer than two days but is engaging enough to maintain interest, mainly due to the unspoken pain exhibited through McGregor and Hawke’s excellent performances and chemistry.

Both McGregor and Hawke take the viewer on an emotional journey, particularly as they each bond with a woman they meet in the town who knew their father better than they did. The story veers into absurdism, particularly in explaining the reasons why Ramond and Ray are estranged from their father, and the filmmaking remains so typical that it never quite matches the work Hawke and McGregor are putting in. There’s a lot of dark comedy to be found in “Raymond & Ray,” and sometimes you can’t help but laugh despite the dour situation but the film’s attempts to play the story on a broader level cheapen the more profound drama at hand. And the jazzy score by Jeff Beal is a nice nod to Ray’s love of the trumpet and adds a fascinating perspective to the movie as it explores how two brothers could turn out so differently. It may not be anything remarkable, but McGregor and Hawke heighten the simple premise of “Raymond & Ray” to be a gutwrenching tale of family trauma.

<b>THE GOOD - </b>Ethan Hawke and Ewan McGregor have great chemistry as half-brothers dealing with the pain of their father's passing, and each takes the audience on a compelling emotional journey.<br><br> <b>THE BAD - </b>The filmmaking never quite rises to the story's absurdity, which also struggles to balance its drama and broader comedy.<br><br> <b>THE OSCAR PROSPECTS - </b>None<br><br> <b>THE FINAL SCORE - </b>6/10<br><br>"RAYMOND & RAY"