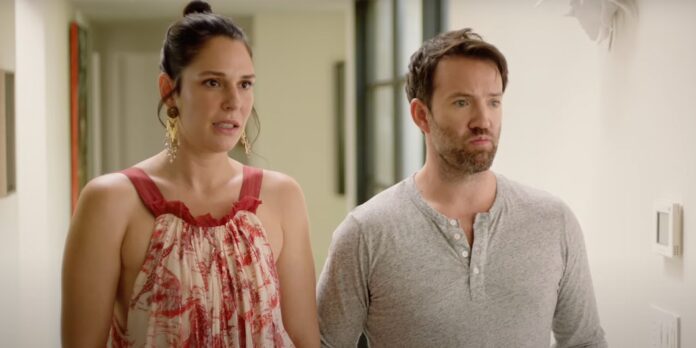 THE STORY – A couple on the rocks are pulled along by absurdly wealthy strangers for a wine country getaway that turns into the most unhinged weekend of their lives.

The premise is simple enough. When one takes a group of people with competing interests, outsized egos, and guarded secrets, it’s a perfect recipe to create a situation brimming with tension. Said tension is often fertile ground for a profound exploration of theme and character, which allows an unraveling to occur, which can be quite compelling. The elements needed to assemble such a story are modest, so production value has no need to be excessive. “Pretty Problems” is a true example of this endeavor. It aims to uncover the deeper conflicts that arise when individuals from varying worldviews are forced to share an intimate space. Unfortunately, much of this film merely treads on the surface and struggles to find any meaningful revelation worth scrutinizing.

Lindsay (Britt Rentschler) and Jack (Michael Tennant) are a married couple who find themselves at a difficult crossroads in their relationship, as neither embodies the fulfilled life they imagined. Jack, a former lawyer, has recently been disbarred following an arrest and is making a menial wage as a door-to-door salesman. Lindsay’s aspirations to be a fashion designer have only taken her as far as working in a local boutique selling clothes. However, it is here that Lindsay has a chance encounter with Cat (J. J. Nolan), an affluent yet eccentric socialite who takes an immediate fancy to her. So much so that she invites Lindsay and Jack to a weekend getaway at one of her homes. The pair are slightly uneasy about the setup, more so from Jack, as they are introduced to Cat’s husband Matt (Graham Outerbridge) and their equally grating guests. As time progresses, the insecurities soon manifest with some significant consequences.

One can immediately identify the commentary at play, one that looks to dissect the jarring class differences within society that push the privileged to exploitation and those who live more humbly to a life of quiet resentment. These are fascinating themes that, sadly, are not examined in any meaningful manner. Tennant also penned the screenplay, and his analysis of this social divide skims the surface and evades the nuanced complexities. Its satire plays for broad observations instead of sharp critiques, leading to pedestrian emotional reveals and a tonal balance that never feels suitably calibrated. In addition, the storytelling issues are not particularly mitigated by director Kestrin Pantera either, whose banal presentation only highlights serviceable filmmaking that often contributes to a laborious pace. The momentum strains to push the narrative, and the results are an expected set of circumstances that eventually come to an abrupt and anti-climactic finale.

There are varying degrees of success within the ensemble, though all of them do a fair job for the most part. The rapport between Rentschler and Tennant is engaging, and they amusingly sell the back-and-forth quips. Tennant, specifically, inhabits an effective grounded quality that feels authentic, and the same goes for the anxieties that Rentschler is able to communicate. Nolan brings an engrossing comedic presence that infuses every moment with a necessary touch of levity that is alluring. Outerbridge is competent in his role but often feels misplaced amongst the others’ energy. Alex Klein and Charlotte Ubben play another rich couple joining in on this retreat, and while their appearance is for the most elementary humorous set pieces, they still bring a boisterous intensity that can be entertaining. Whatever may be lacking in the script is compensated by decent performances, though this cast can only save so much.

“Pretty Problems” certainly contains a handful of impactful moments that speak to the inspection it’s attempting to dissect. The gap that exists between the elites and those of lower social standings is inherently intriguing, yet this effort fails to uncover any understanding that is not blatant and predictable. The outcome relies on cheap shots that lack any serious bite to the message, bypassing the more interesting readings that could be found. A capable ensemble does most of the heavy lifting, and they surprisingly triumph in this pursuit. However, their efforts barely make the piece passable, leaving one to be slightly attentive to the plot without ever becoming fully committed to its objectives.

<b>THE GOOD - </b>The cast carries much of the film, with some engaging performances from nearly every member of the ensemble.<br><br> <b>THE BAD - </b>The themes being explored lack nuance and complexity, leaving the storytelling to be shallow. The filmmaking is banal and contributes to a sluggish pace.<br><br> <b>THE OSCAR PROSPECTS - </b>None<br><br> <b>THE FINAL SCORE - </b>5/10<br><br>"PRETTY PROBLEMS"