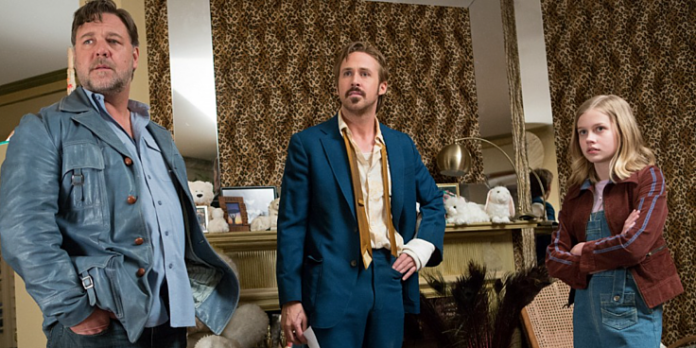 THE STORY – Holland March (Ryan Gosling) is a down-on-his-luck private eye in 1977 Los Angeles. Jackson Healy (Russell Crowe) is a hired enforcer who hurts people for a living. Fate turns them into unlikely partners after a young woman named Amelia (Margaret Qualley) mysteriously disappears. Healy and March soon learn the hard way that some dangerous people are also looking for Amelia. Their investigation takes them to dark places as anyone else who gets involved in the case seems to wind up dead.

Shane Black is back on the big screen again, with the period buddy detective film “The Nice Guys.” It’s a film which harkens back to his “Kiss Kiss Bang Bang” style of writing and directing, but with some more visual flair and higher production value due to his success directing “Iron Man 3.” Shane Black’s penchant for pitch perfect absurd tough-guy dialogue, wit, and entertainment is as prevalent here as ever resulting in one of the most entertaining films this year. This is not only credited to Shane Black but also to the film’s lead duo of Ryan Gosling and Russell Crowe. Both actors perfectly compliment one another and their on-screen chemistry is undeniable, making this neo-noir hopefully, not the last time we see the duo on screen again.
​
​Taking place in Los ​Angeles during 1977, a young woman named Amelia (Margaret Qualley), the daughter of the Head of the Department of Justice Judith Kutner (Kim Basinger), has gone missing. Amidst a scandal involving pornography and murder, Holland March (Ryan Gosling), a down-on-his-luck private eye, and Jackson Healy (Russell Crowe), a freelance hired tough-guy who beats people up for a living, must team up to find Amelia. As they go deeper and deeper into the case, they uncover a conspiracy which leads to everyone involved with the case getting killed in some form or another.

Comparisons will be made to other 70’s time period dramas such as “Boogie Nights” and “Inherent Vice.” However, “The Nice Guys” is able to carve out its own identity for itself and proves to be possibly more entertaining than both of those features. The outfits, the set decoration, the groovy music, the mystery, the banter. All of it comes together to create a perfect blend of action and comedy. Shane Black handles the tone of the film perfectly and never loses the audience on the film’s central mystery throughout its 116 minutes running time.

The stars of the film are Russell Crowe and Ryan Gosling. Together, they create a team of complete opposites who despite their initial differences (Jackson Healy pays a visit to Holland March early on and roughs him up a bit before breaking his arm), share a common desire to solve the missing person case of Amelia. When was the last time Crowe was this entertaining in a film that was as equally entertaining around him? And Ryan Gosling? What more can be said about the versatile actor? Here, he plays the wimpy, overly drunk, and incredibly sleazy Holland March whose own daughter takes care of him more than he takes care of her. Which leads me to another member of the cast and that is Angourie Rice, who plays Holly. Typically, child actors can hinder rather than serve a film. Rice, however, walks away from “The Nice Guys” as its breakout star in a performance that never distracts or annoys but primarily serves the story and it’s two leading characters.

There isn’t much to say about “The Nice Guys” which is in any way negative. Shane Black crafts an easily absorbable plot (Despite this genre’s tendency to be anything other than simple), with two memorable leading characters in a fun time of groovy people, sex, drugs, and violence. If I had to throw one piece of criticism at Shane Black it would be that his humor doesn’t quite stick the landing maybe 5% of the time. I’ll take those odds though, and so should you. “The Nice Guys” represents a great return to form for Shane Black and celebrates a bygone era, with two irresistible leads whose chemistry will hopefully return to the screen in the future.