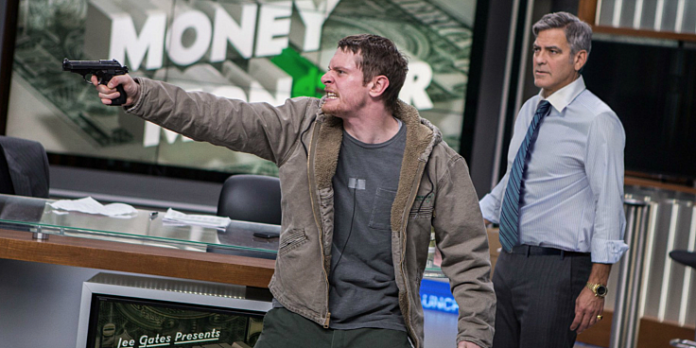 THE STORY – Lee Gates is a Wall Street guru who picks hot stocks as host of the television show “Money Monster.” Suddenly, during a live broadcast, disgruntled investor Kyle Budwell storms onto the set and takes Gates hostage. He tells Lee that he lost everything on one of his tips. As Gates tries to plead with Kyle, he’s also using an earpiece to communicate with his longtime producer in the control room. Together, they must figure out a way to defuse the situation and disarm the angry young man.
​
THE CAST – George Clooney, Julia Roberts, Jack O’Connell, Dominic West, Caitriona Balfe & Giancarlo Esposito
​
THE TEAM – Jodie Foster (Director), Alan Di Fiore, Jim Kouf & Jamie Linden (Writers)

Are we listening? Are we paying attention? Because in “Money Monster,” George Clooney’s talk show character Lee Gates tells us that we have no idea what’s happening. And it’s true. We live in a society where news moves faster than it ever did. And even if a particular story or event captures our interest for a period of time, once we lose interest or it ends, we move on with our lives until the next big story comes around. “Money Monster” digs deep on how we can miss that which is most important when we are distracted, such as $800 million dollars magically disappearing overnight. It doesn’t mean that “Money Monster” succeeds in conveying this message, but director Jodie Foster and her talented cast should be commended for at least trying.

​Financial TV personality Lee Gates (George Clooney), runs the show “Money Monster” together with his director Patty Fenn (Julia Roberts). Lee is unaware that Patty is looking to leave the show after many years of collaboration together. But on one fateful day, they are all unaware of what is set to transpire next. During a routine show, an armed and disturbed Kyle Budwell (Jack O’Connell) takes Lee hostage at gunpoint during the broadcast. He is there to get answers on why an investment tip from Lee for a company called “IBIS” went wrong and the company lost $800 million dollars overnight due to what can only be summed up as a “computer glitch.” Now, Kyle is demanding that Lee and absent “IBIS” CEO Walt Camby (Dominic West), provide Kyle and millions of viewers at home, answers as to what exactly went wrong, or else Kyle will trigger a bomb around Lee’s chest. Police Captain Marcus Powell (Giancarlo Esposito) is trying his best to stall for time until the authorities can figure out a way to diffuse the situation. However, as time passes and the situation grows more dangerous, Kyle, Lee and Patty discover there is more to the “IBIS” loss than what was initially presented.

“Money Monster” wears its heart on its sleeve. It’s concerned with the value of money and its value against human life. And although the skilled cast and confident direction from Jodie Foster (In what is her best-directed feature yet) keep “Money Monster” from being an outright disaster, it struggles to strike a balance between its message and personal character struggles within its screenplay. Last year’s “The Big Short” is an example of creating an “issue” film revolving around similar themes which “Money Monster” touches upon. Another film from last year, “99 Homes,” is an equally brilliant story that takes those similar themes and plays them out through its character’s struggles in the wake of the 2008 financial crisis. While both of those 2015 films worked due to their singular focus, “Money Monster” tries to do both and the results are muddled. Look no further than preachy lines such as, “What is a life worth to you? What’s my life worth?” or “You believe in money. You don’t believe in people.” It’s when “Money Monster” mixes the apparent human danger and tries to convey a larger, more thought-provoking message that the film loses its own focus.

And its a shame really because the main trio of characters (Clooney, Roberts and O’Connell) are all putting forth solid work and are ideally cast here. You really believe Clooney would be this kind of person if he wasn’t busy acting and doing humanitarian work throughout the world. Julia Roberts has the least showy performance of the three main cast members. Yet, she grounds it in such a way that it never attempts to overshadow her co-star’s performances. And Jack O’Connell continues to prove why he is one of the most exciting, emerging young actors around with his emotionally unstable performance as the desperate Kyle Budwell. And at only 25 years of age, he has many roles and memorable performances still left to give us. Don’t be surprised if in a few years he’s regarded as one of our best working actors today.

Jodie Foster marks all the right boxes in employing a talented cinematographer (Matthew Libatique) and a considerate editor in Matt Cheese, who keeps the action moving at a brisk pace, ensuring that the audience never loses patience and is being kept on the edge of their seats. It all boils down to the three screenwriters and their predictable, eyeball rolling screenplay which threatens to derail the movie on multiple occasions. Now the only question left to ask is if “Money Monster” is worth your money? In this review’s opinion, yes, but be prepared to encounter a ton of “human error.”