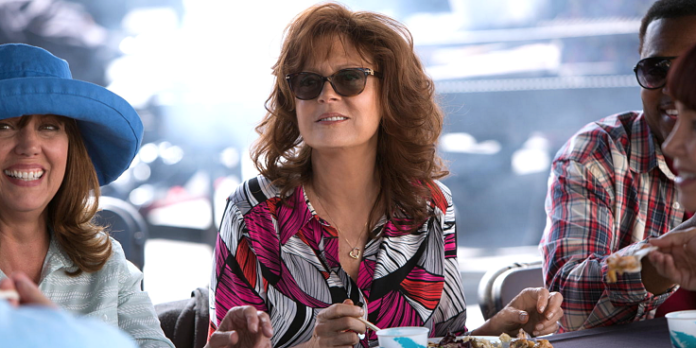 THE STORY – After the death of her husband, a woman (Susan Sarandon) moves from New Jersey to Los Angeles to be closer to her daughter (Rose Byrne).
​
THE CAST – Susan Sarandon, Rose Byrne & J.K. Simmons
​
THE TEAM – Lorene Scafaria (Director/Writer)
​
THE RUNNING TIME – 100 Minutes

“The Meddler” is the follow-up film from Lorene Scafaria who previously directed “Seeking A Friend For The End Of The World.” Here, her film flies due to its spot on casting of Rose Byrne, J.K. Simmons, and a brilliant Susan Sarandon. However, every other aspect of production from directing, to cinematography and the pacing of the film threatens to crash it into the ground. The grieving process and coping with how to move on with your life after the death of your spouse is a theme that has been touched upon in many films before. Scafaria brings nothing new to the table here as the film continuously plays it safe and doesn’t strive to be anything more than a made for television movie.

​Marnie Minervini (Susan Sarandon) is an aging widow who is dealing with the aftermath of her husband’s death. It has now been two years and she has moved from New York to Los Angeles to be with her daughter Lori (Rose Byrne) more. Lori is trying to live out her own life as a screenwriter and is dealing with her own relationship issues while her overbearing mother simply wants to be a part of her life. Marnie’s non-stop voicemail calls and texts to her daughter are not reciprocated and Marnie begins helping others in her life who are near complete strangers to her in an effort to give her some form of purpose. Along the way she meets a retired police officer named Zipper (J.K. Simmons) who might be able to prove to Marnie that love and attachment can still be found in the most unexpected of places.

Based more on her own life experiences, “The Meddler” represents a more confident film from Lorene Scafaria. That doesn’t mean it’s great. Susan Sarandon is what makes this little film great, as she ignites the screen with her energy, rhythmic speaking patterns and a wide range of emotions from complete joy to utter heartbreak. The character of Marnie Minervini is someone who we almost all have encountered in our lives at one time or another. That aging widow who can’t stop rambling and means well, but can be overbearing. There are times where Susan Sarandon can also be overbearing and irritating, but it should not be confused with a poor performance by any means. Rose Byrne also turns in solid work here as the only child in Marnie’s life who suffers the brunt of Marnie’s obsessive need to matter to someone. When Marnie cannot get in touch with Lori by text or calling, she instead latches onto people in her life who she barely knows, trying to help them in any way she can. Marnie’s only desire is to matter to someone and eventually she finds that with J.K. Simmon’s retired cop character, Zipper. J.K. Simmons is not the intimidating, mad, jazz teacher from “Whiplash” here. Instead, we get the warm and human J.K. Simmons from “Juno” (It’s amazing how he can flip the switch between the two so easily). He is not in the movie enough to make a huge impression, but he makes a big enough impression on Marnie and that’s all that matters.

While the cast may receive the most praise here, the film itself leaves a lot to be desired. Another film that dealt with an aging woman going through a life changing experience from earlier this year called “Hello, My Name Is Doris” had a lot more to offer as a film, where “The Meddler” instead feels empty and shallow. Lorene Scafaria is growing as a filmmaker, but she has not hit her stride yet. The potential is there for her to make something truly great, but “The Meddler” falls short with its lack of engaging moments and abrupt ending that ties everything a little too neatly together.