The Main Contenders For The 2022 Best Original Song Oscar Race 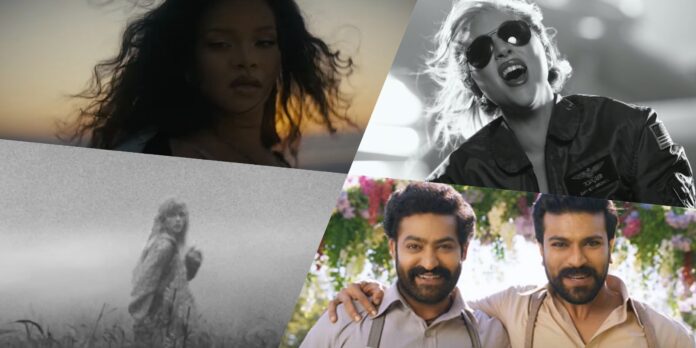 The Best Original Song category is heating up and looking to be a battle of the pop stars. Rihanna, Lady Gaga, and Taylor Swift have all been nominated for both the Golden Globe and Critics’ Choice for their songs “Lift Me Up,” “Hold My Hand,” and “Carolina,” respectively. There are certainly cases that could be made for either to win the award on Oscar night. With big names in the music industry, such as Billie Eilish (“No Time To Die“) and H.E.R. (“Judas And The Black Messiah“), winning over the past few years, it wouldn’t be surprising to see another star in the music industry take home the coveted prize this year, especially in a year with very few musicals being released. However, will either of these artists take home the Oscar, or is there room for something else to surprise? “Do you know Naatu?”

When it was announced that Lady Gaga would be a key player in the music for “Top Gun: Maverick,” the film became a contender for Best Original Song. With the original movie in 1986 winning Best Original Song for “Take My Breath Away,” there was already confidence that Lady Gaga would produce something that would evoke the same reaction. That was precisely what happened with “Hold My Hand.” Playing over the credits and closing off “Top Gun: Maverick” in a grand, spectacular way that feels nostalgic to the original adds an enormous impact to Lady Gaga’s song and makes it a vital aspect of the film-going experience. It was the first major Best Original Song contender in this year’s race, and for a while, it just felt like a default placement at the top position. However, it’s now coming to the end of the year, and there are still arguments to be made that “Hold My Hand” may no longer be the top contender for the Best Original Song Oscar.

Out of all the potential nominees for Best Original Song, the only other film that also has a strong chance at earning a Best Picture nomination besides “Top Gun: Maverick” is James Cameron’s “Avatar: The Way Of Water.” The Weeknd’s new original song “Nothing Is Lost” (You Give Me Strength)” plays over the credits of Cameron’s latest mega-blockbuster. Taylor Swift has been making the rounds to promote her short film “All Too Well” for Best Live Action Short Film at this year’s Academy Awards, so her song from the unexpected hit film “Where The Crawdads Sing” is receiving a much-needed boost from her added exposure. Still, if there is to be a late-last-minute surprise in this category, it will come from a film that, much like “Top Gun: Maverick,” is just too big to ignore from a box office and cultural zeitgeist perspective.

Looking back at “Top Gun: Maverick” though, for a moment, the original film earned four nominations and won the Oscar for Best Original Song. There is a strong chance “Top Gun: Maverick” will exceed that, solidifying that it is an Oscar-friendly film in a year packed with big blockbusters. Looking back at the 93rd Academy Awards, many pundits predicted “Speak Now” from “One Night In Miami” to walk away with the prize. However, the Oscar instead went to “Fight for You” from the Best Picture nominated film “Judas And The Black Messiah,” performed by Grammy-winning artists H.E.R. and D’Mile. Sometimes in this category, all you need is to be the film with the Best Picture nomination to get that little bit of a head start in a tight race. One aspect of “Hold My Hand” that may hinder or help its chances in the category is Lady Gaga, who has already won an Oscar for “Shallow” from “A Star Is Born” in 2018. While it shows that the Academy already embraces her for her music, it may hinder her chances of winning again after only a few years. Not only that, but “Shallow” felt undeniable that year, and it was the only win that “A Star Is Born” would earn on Oscar night. Currently, “Top Gun: Maverick” is in a great position to walk home with the Oscar for Best Sound at a minimum, thus making it competitive for a Best Film Editing (and it’s recently been picking up steam in Best Cinematography) win. It doesn’t need to walk home with a second Oscar for Lady Gaga to become an Oscar-winning film. However, “Avatar: The Way Of Water” will also likely receive a Best Picture nomination, putting it right up there with “Top Gun: Maverick” for the win.

When Lady Gaga won her Oscar for “Shallow,” she ended up beating Kendrick Lamar and SZA’s “All The Stars” from “Black Panther.” This year, for Lady Gaga to walk home with her second Oscar for Best Original Song, she will have to take on another song from the “Black Panther” franchise, Rihanna’s “Lift Me Up.” Despite not being in the Best Picture conversation as the first film was, there are strong arguments to be made as to why “Lift Me Up” might win the category. First, this is a big comeback for Rihanna, who is already going to have a massive year with the confirmation of being the Super Bowl Halftime Show headliner next February, which is when voting takes place for the Oscar winners. This platform will give her great exposure at the perfect time and remind voters of her power in the music industry. She has also never been nominated at the Oscars. Therefore, several voters in the Academy may like to see her rewarded with her first win instead of handing Lady Gaga her second. In terms of the song itself, like The Weeknd’s “Nothing Is Lost (You Give Me Strength)” and Gaga’s “Hold My Hand,” “Lift Me Up” plays over the film’s end credits. However, it evokes an entirely different reaction. While “Hold My Hand” lets the audience leave on a very high note, “Lift Me Up” makes audiences stay in their seat and reflect on the tragic loss of the late Chadwick Boseman. Given the Academy’s decision to predict “a moment” for Chadwick Boseman on their telecast two years ago in the Best Actor category by having it (unwisely) close the show and having it backfire, this could be one way to rectify that disastrous moment and give Boseman the final closure that he deserves. While this will never make the ending of that ceremony acceptable, it would work as a fitting tribute, just as the song does for the film. Additionally, this is potentially the best way of rewarding “Black Panther: Wakanda Forever” at this year’s ceremony (with recent Critics Choice and Golden Globe nominee Angela Bassett rising in the predictions in Best Supporting Actress). Unlike “Top Gun: Maverick,” which will exceed its predecessor at the Oscars, the same cannot be said about “Black Panther: Wakanda Forever.” It has tough competition in the categories it did well in previously, and it may even walk away empty-handed if Rihanna fails to win here. While the competition between Lady Gaga and Rihanna is close at this moment, with The Weeknd or Taylor Swift possibly coming in up the middle, given all of the factors we currently have, I believe the Academy will lean towards “Lift Me Up” to win Best Original Song.

Vote splitting between Rihanna and Gaga may lead to an open opportunity for someone else to come in and take the win. Along with The Weeknd’s “Nothing Is Lost (You Give Me Strength)” and Swift’s “Carolina,” a lot of passion is building up for “RRR,” which has a qualifying song in “Naatu Naatu.” If the Academy wants to reward a song that isn’t just a credits song but is heavily featured in the film itself, especially in a sequence that is reminiscent of the musical genre, “Naatu Naatu” would be a fantastic choice (especially for the opportunity to see it performed during the ceremony). The song also recently scored nominations for Best Original Song at the Golden Globes and Critics Choice Awards. The film itself is building momentum as a possible Best Picture nominee, which would dramatically help its chances here.

If the Academy wants to go in a different direction, they could always hand the award to someone who clearly wants to win the category: Diane Warren. Yes, she may have just received her honorary Oscar at the Governor Awards, and perhaps some members may think that she no longer needs to receive a nomination for every qualifying song that she writes; however, she does have a song this year titled “Applause” from the film “Tell It Like A Woman,” and at the rate she has been going lately, I fully expect to see it nominated this year. One final song that is worth considering for the award is the outlier sole Critics Choice nominee, “New Body Rhumba,” which plays (once again) during the end credits of “White Noise.” Unlike most end credits songs that play over text, this song from LCD Soundsystem plays over the actors dancing in a way that makes it memorable and could stand out just enough for voters to get it into the category. While there is a chance for “White Noise” to get an Oscar nomination for Best Adapted Screenplay, its best opportunity to earn a nomination is for its music in either the Best Original Score or Original Song category (or perhaps both).

Who will win Best Original Song at this year’s Academy Awards? Should another song be in contention besides the ones I mentioned? With such a large overlap in the Critics Choice and Golden Globe nominees and very few Best Original Song precursors, this might be all we have on the table unless one shockingly misses the Oscar shortlist, which will be announced on December 21st. Please let us know your thoughts in the comments section below or on our Twitter account, and check out the Next Best Picture team’s latest Oscar predictions, including Best Original Song, here.