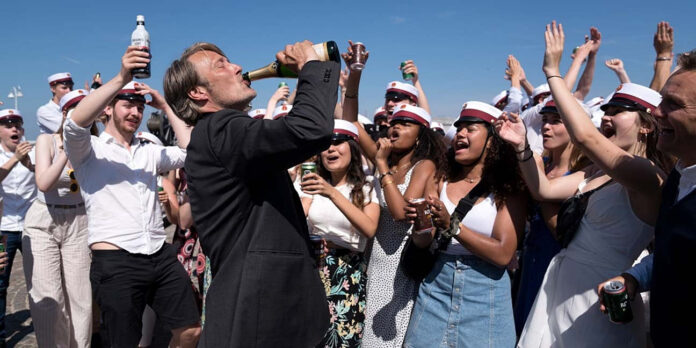 THE STORY – Once the brightest teacher at his high school, Martin (Mikkelsen) has fallen into a seemingly permanent funk. He’s barely present in his classes — the students and their parents even attempt an intervention — and his marriage is slowly dissolving. At a birthday celebration, his three closest colleagues (all men), cajole teetotaller Martin into boozing along with them. They get progressively drunker and the shit-disturber of the group, Nikolaj (Magnus Millang), tells them about an obscure philosopher who argued humans aren’t born with enough alcohol in their blood. As an “experiment,” he proposes they all drink constantly throughout the day to maintain the “proper” blood-alcohol level of 0.05%. Initially the boozing seems enormously beneficial. A reinvigorated Martin begins to engage with his students and shocks his long-suffering wife, Trine (Maria Bonnevie), with his new-found zest. But as the gang pushes their experiment further, issues that have been simmering for years come to the fore and the men are faced with a choice: reckon with their behaviour or continue on the same course.
​
THE CAST – Mads Mikkelsen, Thomas Bo Larsen, Magnus Millang & Lars Ranthe

Everything in moderation, the saying goes, but human beings are notoriously bad at following that advice. So when high school teachers Martin (Mads Mikkelsen), Nikolaj (Magnus Millang), Peter (Lars Ranthe), and Tommy (Thomas Bo Larsen) decide to reinvigorate their lives by testing a theory that human beings have a natural blood alcohol 0.05% too low, you can probably guess how it’s going to go. And sure enough, Thomas Vinterberg’s “Another Round” goes pretty much exactly how you’d expect: At first, the alcohol loosens the men up – the depressive Martin is excited in class again, Nikolaj gets creative with his school choir, and Tommy is more empathetic to one of the outcasts on his youth soccer team. But the fact that it goes so well means that the men start drinking more and more, showing up to work visibly drunk and putting themselves in jeopardy. Will they be able to stop themselves before it’s too late?

Even if the plot of “Another Round” feels a bit unsurprising, it is consistently engaging thanks to the performances of the four leads. Each of the men has a distinct personality, but the chemistry between them is strong, so it always feels believable that these four very different men would be close friends. Each actor also makes the alcohol-induced changes in their character believable as stages of drunkenness. Mikkelsen in particular is incredibly good at this; Martin has the biggest character arc, and the actor finds a deep core of fear inside him that slowly dissipates the more alcohol he consumes. He is even able to play how the effects of the experiment have rippled out to affect his life when he is not drinking, as in a touching scene where he takes his family on a canoeing and camping trip with a blood alcohol of 0.0%.

Mikkelsen is aided by his “The Hunt” director Vinterberg, who finds just the right shot scales and lighting to use to emphasize the men’s increasing drunkenness throughout the film. The decision to use on-screen titles to show the men’s blood alcohol content throughout the film is well-done, as is the use of the same text to show text messages between Martin and his wife. Its use to highlight passages of the men’s written report of their experiment, however, feels unnecessary. Other than that slight misstep, though, Vinterberg knows just how much is too much for the story, even finding just the right amount of shaky-cam shots and slow-motion montages – two cinematic tricks that are verging on overuse these days – to enhance the storytelling. The final scene, which takes place at an alcohol-fueled graduation celebration for the high school seniors in town, is especially well-done, with Mikkelsen finding just the right mixture of happiness and resignation.

What really helps “Another Round” works as well as it does is that it never dips too far into melodrama. Everything stays grounded, even and perhaps especially when the men are at their worst. A late scene where Nikolaj encourages a nervous student to drink during his exam is played with just the right amount of queasiness, and Tommy’s growing relationship with the young boy he calls “Specs” starts off with alarm bells ringing before ending up somewhere else entirely. This groundedness, the unwillingness to push the story too far even when the characters threaten to do so, keeps the film on an even keel throughout. While this may not cause enough enthusiasm in a viewer to have them coming back for round two (or three, or four) with the film, it does give them a good buzz while watching.