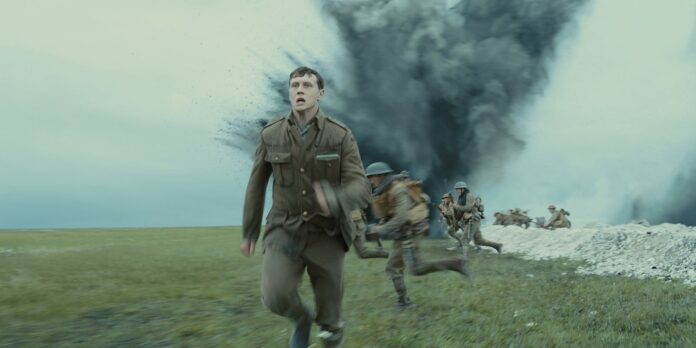 THE STORY – Two British soldiers embark on a dangerous mission to save 1,600 men from certain doom during World War I.

​​​​​​​​War films have been a staple of cinema since the very beginning. We’ve seen countless battles and conflicts, both internal and external, play out on the screen with a war in history acting as the backdrop. However, with Sam Mendes’s new film “1917,” I can promise you, you’ve never seen a war film quite like this. Told in “one shot,” Mendes’s second war film (his first being the deceptively quiet and non-action packed “Jarhead”) is not only the best film he has ever directed but one of the greatest war films ever put to screen. “1917” is an experience you will never forget. It’s the technical achievement of 2019, one that is filled with tension, horror, action, heroism, and emotion.

Sam Mendes takes his skills as a theater director and dishes them out on screen, creating tremendously long takes with minimal actors, intricate blocking and precise timing. It’s a masterwork from every department involved, including the actors. Working stories his grandfather, Alfred Mendes, told him about his first-hand experiences in the first World War, Sam Mendes (along with co-writer Krysty Wilson-Cairns) gives “1917” a great amount of heart through its characters. The date is April 6th, 1917. Two young British soldiers named Pte. Blake (“Game Of Thrones” star Dean-Charles Chapman) and Pte. Schofield (“Captain Fantastic” star George MacKay) are ordered by their commanding officer (Colin Firth) to cross enemy lines and deliver a message, which will warn their men of a trap set by the Germans that could lead to the loss of 1,600 men, one of whom is Pte. Blake’s brother (played by another “Game Of Thrones” alumn, Richard Madden). With time running out and lots of ground to cover, Schofield and Blake set off on a mission where, through the magic of filmmaking, the audience is with them every step of the way.

The already legendary Oscar winner, Roger Deakins, should make room next to his Academy Award for “Blade Runner 2049,” because what he and his team have pulled off here is nothing short of a miracle. With miles of wide-open ground to cover, Deakins manages to find the right framing and composition within these long tracking shots that take your breath away. Where his work on “Blade Runner 2049” is a masterpiece of light and color, “1917” is all about the camera movement, crafting another masterpiece of photography from a man who, at 70 years of age, is still finding new ways to one-up himself.

However, one man who doesn’t have an Academy Award for his own legendary career is composer Thomas Newman. After receiving fourteen Oscar nominations, not only should “1917” bring him his fifteenth, but it should become his first win. The work is a combination of Newman’s “greatest hits,” taking the pulse-pounding, exhilarating excitement of something like “Skyfall,” with the delicacy and gorgeous light piano notes from “American Beauty,” and adding in the stirring and emotional strings of “The Shawshank Redemption.” Put all of these together, and the overwhelming artistry of his work is enough to bring tears to your eyes. One sequence in particular, towards the film’s climax, did indeed cause teardrops to fall from my face. As Deakins’ camera swoops across an open field, George MacKay, who has been through hell, makes one final ditch effort to save the lives of hundreds of men, and all the while, Newman’s score is there to deliver the moment straight to our hearts. I will never be able to forgive the Academy if they don’t honor his work this time. It’s that damn effective.

The production design, makeup and sound work of “1917” are also fantastic across the board. The sheer size of all these elements, to create extended takes with full believability and immersion, is nothing short of a feat in filmmaking that will likely rank high on the best of the decade. There are miles of 360-degree environments that need to be fully decorated and filled with hundreds of extras who all need to be wardrobed and done up in the makeup chair with scars, battle wounds, etc. My mind spins just thinking about how much effort every department had to put in to pull this off. And then there’s editor Lee Smith, who may or may not get the credit he deserves for taking these various long shots and attempting to stitch them together seamlessly to look like one continuous shot. I will say, there is one moment in the movie where there’s an obvious edit, but the rest are all well hidden. Only eagle-eyed viewers who know how film editing works will be able to find them.

For all of its technical greatness, “1917” wouldn’t be what it is without its cast: George MacKay, Dean-Charles Chapman and the long list of cameos from other well established British actors, such as Colin Firth, Andrew Scott, Benedict Cumberbatch, Mark Strong, and Richard Madden. While the bigger names all help contribute to the story and lend a level of gravitas with their performances (particularly Madden, who has only maybe five minutes of screentime but absolutely delivers the goods in his short amount of time), this is the George MacKay and Dean-Charles Chapman show. The physicality, grueling hard work and dedication these two men bring to their roles is nothing short of astonishing. There are no breaks, no room for mistakes and no cutaways to hide any flaws within their performances. As I said before, Sam Mendes is a genius theater director, and to pull off the realism of this intense story of hardship and bravery, you need two incredible actors. While some may not be as familiar with George MacKay and Dean-Charles Chapman before watching “1917,” I guarantee that when the credits roll, their careers are going to skyrocket as a result of their astonishing work.

“1917” manages to do what “Dunkirk” did a few years ago. It brings something new to the war genre. Many people have been comparing the two due to similar marketing, but once they see “1917,” they’ll realize just what a singular achievement Sam Mendes, his cast and crew have managed to pull off. “1917” is tense, gripping, explosive, but also, emotional and intimate. It takes the best that the genre has to offer, but presents it with a unique style that may be seen as just a gimmick on the surface; however, Mendes and his team of filmmaking wizards find a balance in the storytelling that is utterly transfixing, captivating and awe-inspiring. Every footstep, every drop of sweat and every drop of blood these two young men take on their journey, it’s all captured here creating a cinematic experience unlike any you have ever seen, heard or felt before. See it on the biggest screen with the loudest sound you possibly can.