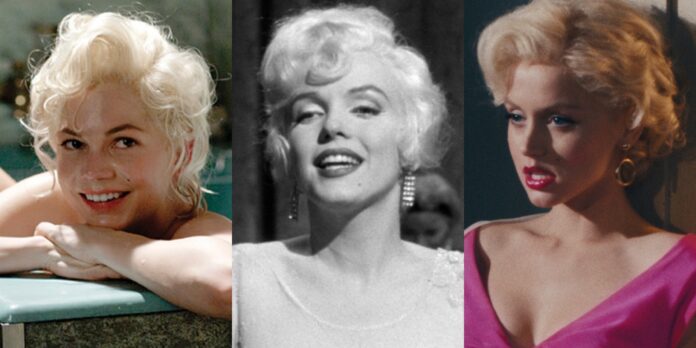 I cannot remember a time when I didn’t know who Marilyn Monroe was. I could say the same about Elvis Presley, another American icon whose life is the subject of another much-talked-about 2022 film. “Blonde,” directed by Andrew Dominik and based on the novel by Joyce Carol Oates, is far from a typical biopic detailing a star’s humble beginning, meteoric rise, and astronomical fall. Instead, the film is closer to a collage of moving images from Marilyn’s life, both real and legendary. Her iconic image has allowed Marilyn to maintain her status as a historical icon sixty years after her death. Perhaps, one might argue, she is more famous than ever. With her untimely death at 36 years old, her name and image became the stuff of legends, and her tragic story has maintained its impact decades later.

Because of her recognizability, that is, her face, voice, hair, and body, the prospect of a biopic about the girl née Norma Jean has been one mostly untouched by filmmakers. “Blonde” was actually first adapted as a miniseries back in 2001, a year after the novel’s release. Starring Poppy Montgomery as Monroe, the series was supported by a cast of familiar names such as Patrick Dempsey, Jensen Ackles, Kirstie Alley, and Ann-Margret. In 2011, Monroe was played by Michelle Williams in “My Week with Marilyn,” a slice-of-life film told from the perceptive of a young man who worked on “The Prince and the Showgirl.” Williams, who plays a delicate, heart-driven Monroe, was nominated for an Oscar for Best Actress for her performance. Besides this, I have found only a handful of documentaries, made-for-TV movies, and a pair of films called “Goodbye, Norma Jean” and “Goodnight, Sweet Marilyn” summarizing her on-screen portrayals. Her image, on the other hand, is a different story.

Besides, it is not the facts of her life that people are drawn to, but the image of her that one can identify in an instant. While she has been the subject of only a few films and tv series, allusions to her appearance and performances are abundant. Madonna’s love of the glamorous world of Old Hollywood is evident through her song “Vogue,” where she drops Marilyn’s name alongside a dozen of her contemporaries, and the music video for “Material Girl” in which she recreates the iconic “Diamonds are a Girls Best Friend” scene from Howard Hawks’ “Gentlemen Prefer Blondes.” Countless other musicians have mentioned her name or alluded to her image in their work, such as Michael Jackson, Lady Gaga, Nicki Minaj, Billy Joel, David Bowie, Jay-Z, The Kinks, Alicia Keys, Katy Perry, Rihanna, the Spice Girls, Pharrell Williams, and the Beatles, to name a few. To some, like Elton John, her life and legacy were enough to inspire an entire dedication in the form of “Candle in the Wind.” In her musical short film “Tropico,” Lana Del Rey places Monroe in the Garden of Eden alongside Elvis, John Wayne, and Jesus, crooning, “Marilyn’s my mother…”. Del Rey also recreated Marilyn’s iconic “Happy Birthday, Mr. President” performance in the music video for her song “National Anthem,” in which the singer dedicates the tune to A$AP Rocky.

Beyond music, film, and television, Monroe has been cited as an inspiration and muse to various artists and celebrities. Former Club-Kid and beauty icon Amanda Lepore’s aesthetic of exaggerated femininity is an homage to the stars of the Golden Age, with platinum blondes such as Jean Harlow, Mae West, and Monroe being the most evident. Model Anna Nicole Smith often expressed her admiration for Monroe and a desire to follow in the actress’s footsteps. In a charming clip of red carpet footage, Smith poses for cameras in a skin-tight sequinned dress as a fan yells, “You’re like Marilyn, only better!”. Smith immediately wags her finger and shakes her head, claiming “never better than Marilyn.” Of course, just this past year at the Met Gala, reality star Kim Kardashian, in an act that made my skin crawl as a student of preservation, wore the record-breaking “Happy Birthday” dress designed by Bob Mackie in a failed attempt to emulate the actress on the red carpet. The dress, which was intentionally designed to match Marilyn’s skin tone to present the striking illusion of nudity, looked dull and ill-fitting on Kardashian’s fake-tanned skin. While Marilyn was practically sewn into the garment, Kardashian’s exaggerated measurements caused tears in the delicate fabric and irreparable damage to a priceless artifact of American fashion history.

Of course, Marilyn’s image is today most prevalent in the never-ending void of consumerism. Her face is constantly plastered on any object you can think of. T-shirts, bags, makeup, lunch boxes, calendars, books, makeup collections, bedsheets, pillowcases, and fridge magnets all bear her image with no sense of reverence. At the same time, the road of the internet is paved with falsely-attributed quotes of the star who most definitely never said: “if you can’t handle me at my worst, then you don’t deserve me at my best.” Unlike Elvis, Monroe has no living spouse or children. Her estate is out of the control of those with the intention to protect her legacy as a private citizen and is instead in the hands of those in search of profit. Through a series of occurrences, the majority of Monroe’s estate went from the hands of her acting coach Lee Strasburg to those of his second wife, who then sold her portion to CMG Worldwide Inc., an intellectual property management company that has allowed Marilyn’s image to be used for thousands of endorsements and various products. For this, nothing can be done. As far as I can tell, her image will continue to permeate through pop culture for the foreseeable future. While I should never want her legacy to be forgotten, it is imperative that it is remembered for who she was and not how she was seen. I would suggest to those who know her only as the blonde in a white dress standing over a subway grate to take a dive into her filmography. For her best film, I direct you to “Some Like it Hot”; for her best performance, I suggest “The Prince and the Showgirl.”