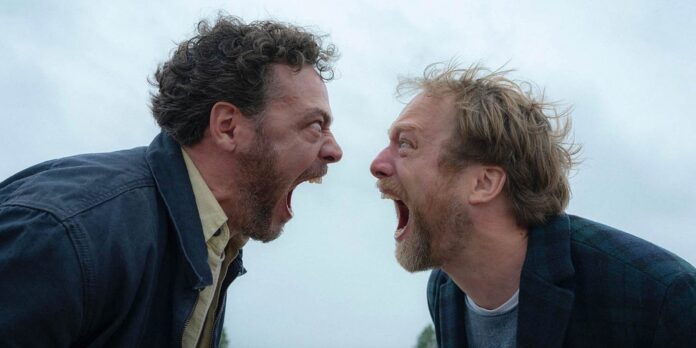 THE STORY – A Danish family visits a Dutch family they met on a holiday. What was supposed to be an idyllic weekend slowly starts unraveling as the Danes try to stay polite in the face of unpleasantness.
​
THE CAST – Morten Burian, Sidsel Siem Koch, Fedja van Huêt, Karina Smulders, Liva Forsberg & Marius Damslev

It’s rare that you find a movie that is as good as “Speak No Evil” and know that you will recommend it to almost no one. It is an uncomfortable, infuriating, brutal, hellish ride that will linger with you long after it is gone. It is a film that culminates in one of the most sadistic endings in recent memory, yet for much of its runtime, it is curiously…enjoyable. Even funny? Director Christian Tafdrup has managed to create both a hysterical comedy of manners and a hellacious horror film.

Bjørn (Morten Burian) and Louise (Sidsel Siem Koch) are a polite and sensitive couple. They both don’t speak their minds. Bjørn feels suffocated by spending nights hanging with friends he doesn’t like. He cries during concerts and walks a mile to recover his daughter’s misplaced stuffed animal. He is a passive, caring father and husband who happens to be a bit of a pushover. He and Louise are drawn to the boisterous and outspoken Patrick (Fedja van Huêt) when they meet him and his wife Karin (Karina Smulders) on vacation. Patrick bemoans his ‘boring’ and ‘politically correct’ coworkers and seems unbridled by societal expectations of manners. So when Patrick invites them to a spontaneous vacation to his home in the Netherlands, Bjørn and Louise agree. In part because they’re fascinated and, in part, because they don’t want to be ‘impolite.’

When they arrive, however, something is…off. Patrick’s home is cramped. His son is unable to speak because he is missing a tongue. And Patrick and Karin continually violate small social norms, ensuring the vacation grows more and more uncomfortable by the minute.

Most of “Speak No Evil” focuses on these uncomfortable moments throughout the weekend. The film’s ominous, droning strings in the background suggest something terrible is around the corner. Yet, for much of the film, the only thing looming ahead is another even more uncomfortable moment. Patrick and Karin’s behavior is so outrageous, yet each act on its own has an innocent explanation. These moments are beyond uncomfortable to watch, yet also hilarious. Inappropriate displays of public affection, loudly singing along with romantic ballads in the car, halting conversations, confusion over dinner tabs. Tafdrup is skewering passive Europeans who choose to tolerate and ignore inappropriate behavior for fear of being rude or making a scene. Much of the film is so effective because, like “Curb Your Enthusiasm,” it presents all these plausible uncomfortable situations and asks the viewer, “What would I do in that scenario? Would I react or just let it go.”

But while the film distracts the viewer with its uncomfortable comedy, it lays clues for a terrifying reveal. When everything clicks into place, so much from earlier in the film makes sense. The realization is chilling, and seeing what happens next unfold is haunting. It is bloody and cruel and makes you wonder just how the Tafdrup thought it up.

The film’s conclusion is infuriating, primarily because of the characters’ decision-making that allowed the ending to unfold as it does. But that’s part of Tafdrup’s point. It is a cold and ruthless ending that solely happens, as one character puts it, “because you let me.” “Speak No Evil” is a nihilistic look at the dangers of suppressing emotion and refraining from confronting bad and dangerous behavior even when it stares you in the face and begs you to.

Given its blunt message, “Speak No Evil’s” characters naturally tend towards extremes of excess or passivity, but the cast members ensure that their performances still feel like real people. Burian is the standout here, but van Huêt and Smulders walk an uneasy tightrope portraying characters who are clearly “off” but still charming enough to persuade strangers to come home with them.

It is a thoroughly unpleasant film. It is often hilarious but in an uncomfortable, nervous laughter sort of way. And its ending is sadistic and bleak. Yet the film lingers. Its haunting ending shots in particular, but also the ways small beats from earlier scenes make sense in light of the film’s ending.

“Speak No Evil” is not an easy film to recommend. But for those with strong stomachs for cringe-inducing awkwardness and graphic violence, it is a journey well worth taking.