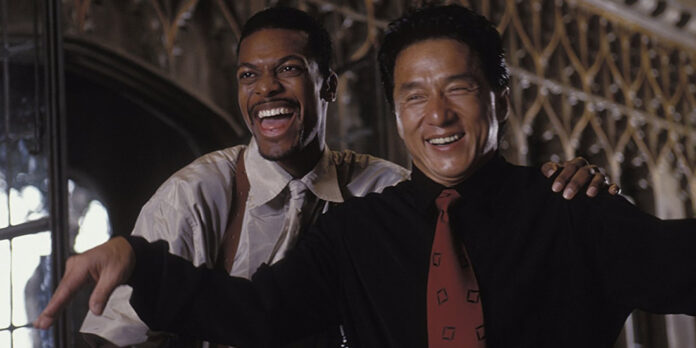 ​THE STORY – When a Chinese diplomat’s daughter is kidnapped in Los Angeles, he calls in Hong Kong Detective Inspector Lee (Jackie Chan) to assist the FBI with the case. But the FBI doesn’t want anything to do with Lee, and they dump him off on the LAPD, who assign wisecracking Detective James Carter (Chris Tucker) to watch over him. Although Lee and Carter can’t stand each other, they choose to work together to solve the case on their own when they figure out they’ve been ditched by both the FBI and police.

10/11/17
​​By Daniel Howat
​
In 1998, Jackie Chan was already one of the biggest Chinese film stars of all time. He had made “Rumble in the Bronx”, “The Legend of the Drunken Master” and four entries in the “Police Story” series. A few of his films had gained traction in North America, but Chan was far from a household name. That all changed with the release of the action comedy “Rush Hour”.

The film opens with Inspector Lee (Chan) executing a raid on a shipping yard, and failing to capture Juntao, a crime lord in Hong Kong. He succeeds, though, in capturing many historical Chinese artifacts, and returns them to his boss, Consul Solon Han (Tzi Ma), as a farewell gift. Han moves with his family to Los Angeles, taking up a new post in the United States. In a well-crafted sequence on the busy streets of LA, his daughter, Soo Yung, is kidnapped on her way to her first day of school.

While the FBI is handling the kidnapping, Han calls in Lee to assist the investigation. This annoys the FBI, and they pass him off to the LAPD to waste his time. Enter Detective James Carter (Chris Tucker), the wannabe hot-shot who hilariously screws up a sting operation, resulting in a massive explosion in LA. From the very first time we meet Carter, he’s charismatic and obnoxious and steals every scene he’s in. It’s so much fun to watch Tucker in this role, and it gets even better when he’s paired with Chan.

Immediately when Carter meets Han he starts to belittle him. Carter shouts “Do you speak-a any English?” Han remains silent for the next few scenes, annoying Carter. There’s a brilliant sequence in which he ditches Carter, which includes climbing up on a tour bus, hanging on a street sign, and jumping from car to car. Still, before long the two decide they want to take the case on themselves, behind the backs of the FBI.

There’s no question that in the genre of buddy-cop films or action-comedies, “Rush Hour” is now considered a masterpiece. The chemistry between Tucker and Chan is an absolute joy to watch and has even entered pop culture with a television remake and famous lines such as “Do you understand the words coming out of my mouth?” They seem to genuinely enjoy these characters and the interactions between them are hilarious. A scene in a pool hall run by Carter’s cousin is particularly fantastic, ending with a great bar fight. Chan’s ability to have detailed fight scenes both in close quarters, like jumping over and under pool tables, never ceases to amaze. But it’s not just in tight spaces that he excels. In fact, many stunts are filmed in very wide shots so we can see every bit of real danger that Chan has put himself in.

Carter and Lee pursue the mysterious Juntao and begin to make headway. While the plot is interesting, most of the secondary characters are less so. Carter’s former partner gets very little to do outside of defusing an important bomb. There’s a twist near the end that works, but it’s not tough to see from a mile away. Still, this doesn’t take anything away from the real reason you’re watching: Tucker and Chan. Their fight scene above the Chinese restaurant makes a great use of their chemistry, as the two literally hold hands for some of the mesmerizing sequence.

Though he’s had a magnificent and unparalleled career, for me, “Rush Hour” remains Jackie Chan’s best film. The later entries in the series are both excellent films in their own right, but neither can top the original. Endlessly quotable and completely memorable, “Rush Hour” stands head and shoulders above most buddy-cop movies.