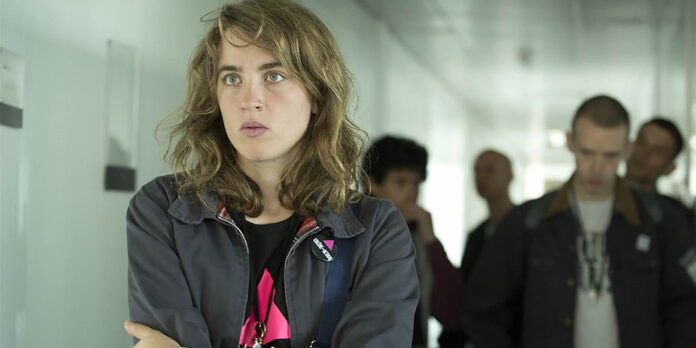 THE STORYNathan is a young man who joins an AIDS activist group in 1990s Paris. As he attends the weekly meetings, he learns that some members prefer a more radical approach to their protests.

During the Q&A session that followed the New York Film Festival screening of his film, “BPM (Beats Per Minute),” writer-director Robin Campillo revealed that he drew from personal memories and experiences while writing the screenplay. Campillo discussed how he aimed to make a movie that was true to his emotions rather than a detached exercise grounded solely in formal research. It is this focus on the personal, on the lives of the people involved, that makes “BPM (Beats Per Minute)” such a profoundly moving film.

Set in the nineties, “BPM” follows the experiences of the members of ACT UP Paris (of which Campillo was a member), an organization that advocated a more humane and urgent response to the HIV/AIDS crisis. ACT UP championed a fearless mode of activism, engaging in such activities as throwing balloons filled with fake blood at pharmaceutical representatives who withdrew crucial research results from those victimized by the disease. ACT UP demanded attention, action, and resources from a society that was, at best, complacent and incompetent and, at worst, deliberately inactive and homophobic in the face of the HIV/AIDS epidemic. “BPM” pays tribute to the courage of ACT UP, both by demonstrating its activism and by diving into the lives of its members. The film’s chief narrative thread involves the romance between Sean (Nahuel Perez Biscayart) and Nathan (Arnauld Valois). It is as heartbreaking and inspiring a love story as we have seen at the movies in quite some time, and the precariousness of its existence – Sean is HIV-positive and the threat of death and loss looms over the relationship – adds a feeling of immediacy to every moment that Sean and Nathan share. The scenes between Sean and Nathan epitomize the gracefulness of Campillo’s screenplay and the excellence of his actors. Biscayart and Valois are sublime together, their rapport the perfect outlet for Campillo’s vision.

“BPM” further humanizes its protagonists by illustrating the factionalism within the movement. Several scenes depict the regular ACT UP meetings, during which the group’s members debate the merits of the available courses of action. The film breaks the group into 2 broad factions: those who favor a more radical form of public protest and those who prefer a more collaborative approach with medical researchers. Campillo does a brilliant job of letting these tactical debates flow naturally, without apparent bias toward one side or the other. Devoting a significant portion of the film’s running time to long-form discussions about organizational strategy is a bold move, but these scenes play out in riveting and empathetic fashion.

The focus on factionalism also instills in “BPM” an extra layer of timeliness. We live in an era in which dissent, opposition, and activism are essential armors in the fight against injustice and authoritarianism. By emphasizing the effectiveness of a multifaceted opposition movement, one in which rigorous debate regarding strategy is a welcome asset in the pursuit of progress, “BPM” charts a viable path forward.

The timeliness of “BPM (Beats Per Minute),” though, should not distract attention away from its specificity. This is a powerful film about the Paris chapter of ACT UP, and about individuals who were at once heroic in their activism and ordinary in their humanity. Characters like Sean and Nathan sacrificed their bodies and safety to advocate for more compassionate and consequential treatment of people diagnosed with HIV/AIDS, all the while yearning for normal romantic, professional, sexual, and human experiences. “BPM (Beats Per Minute)” is rooted in the rhythms of everyday life, and its momentous themes blossom out of this natural foundation.

THE GOOD – A genuine, heartbreaking story, gracefully realized by writer-director Robin Campillo and his terrific cast of actors.

THE BAD – The film’s excellence is evident in all of its aspects, but the musical score does not always rise to the level of the film’s emotional power.
​
THE OSCARS – None