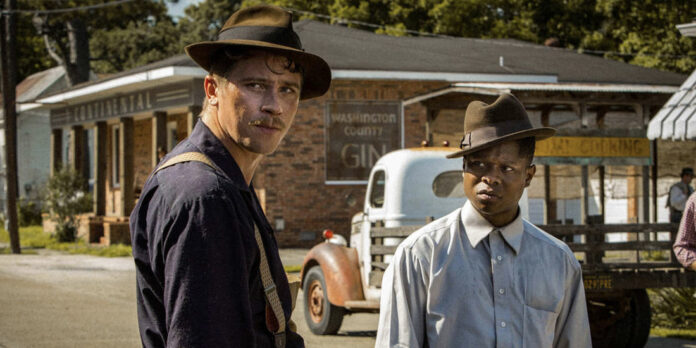 THE STORY – Laura McAllan is trying to raise her children on her husband’s Mississippi Delta farm, a place she finds foreign and frightening. In the midst of the family’s struggles, two young men return from the war to work the land. Jamie McAllan, Laura’s brother-in-law, is everything her husband is not – charming and handsome, but he is haunted by his memories of combat. Ronsel Jackson, eldest son of the black sharecroppers who live on the McAllan farm, now battles the prejudice in the Jim Crow South.

We are all bound for the mud. We are all human. We are all born to a family. And then, one day, we all eventually die. Dee Rees’s epic film “Mudbound” attempts to tell a sprawling story about two families living in post World War II Mississippi. With a terrific ensemble of actors all given equal opportunities to shine in their roles, “Mudbound” always holds our attention despite a clunky first half. However, Dee Rees’s storytelling comes full circle in the film’s second half allowing the film to work its way over us and deliver a gut punch that lasts long after the credits roll.

“Mudbound,” tells the story of two families in pre and post World War II Mississippi, the Jackson’s (Rob Morgan and Mary J. Blige) and the McAllen’s (Jason Clarke and Carey Mulligan). Hap (Rob Morgan), Florence (Mary J. Blige) and their children work on the same land under the McAllen’s which creates some uneasy tension between the two families living in a racist southern state. Hap and Florence’s son Ronsel (Jason Mitchell) leaves his family to serve in World War II while Henry’s brother Jamie (Garrett Hedlund) also leaves to serve as a pilot. Both men return home forever changed and try to rediscover their place in the world filled with so much hatred.

The McAllen and Jackson families consist of fully fleshed out characters, both dealing with their own issues on how to best find their places in the world. In order to survive, they must co-exist peacefully. The McAllen family, attempting to be farmers are at the mercy of the weather and whatever unfortunate circumstances may befall upon them. The Jackson family has an even bigger issue to deal with and that is their community’s hatred and racism towards them. Dee Rees is accurately able to show that not everyone who is white is purely evil. Those characters exist here and are defined by Henry McAllen’s racist father played by Jonathan Banks. However, Dee Rees’ film is one about tolerance, acceptance, love and defining what it is that unites us. For two men, it is the bond they share as veterans in a war that was a true fight of good versus evil. The fight between good and evil back home feels petty and can’t compare to the horrors they have faced. Both men have changed and rightfully so. The first half of “Mudbound” is messy and tedious with constant voiceover and a lack of focus. However, the way in which the film handles both men’s return home in the second act is where the film finally comes alive.

The performances throughout the film but particularly in the second half are all phenomenal. Carey Mulligan, Jason Clarke, Mary J. Blige, Rob Morgan and Jason Mitchell all full disappear into their roles and captivate us throughout, even when the film around them stumbles with its storytelling. However, the one who really sneaks up on you is Garret Hedlund. Always a constantly engaging actor (Remember when he was the only good thing about “Billy Lynn’s Long Halftime Walk?”), he reaches a new peak here as the once charismatically confident man, completely wrecked by his experiences in war and turning to alcohol and a new found friendship with Ronsel for comfort. I was truly impressed by him in this film and sincerely hope that this is the beginning of even better things for the still relatively young actor.

Despite some of its flaws, “Mudbound” sticks the landing and delivers a thoughtful meditation on humanity, our senseless hatred towards each other and how we need to take steps to understand and love one another if we are going to survive in this world. Dee Rees has crafted an ambitious film that clumsily jumps back and forth between the two families stories in its first half before finally settling down in its second half to deliver a flurry of powerful sequences, performances and a final message that will resonate strongly with many who watch it. Hopefully, due to the Netflix platform, many will indeed watch it.