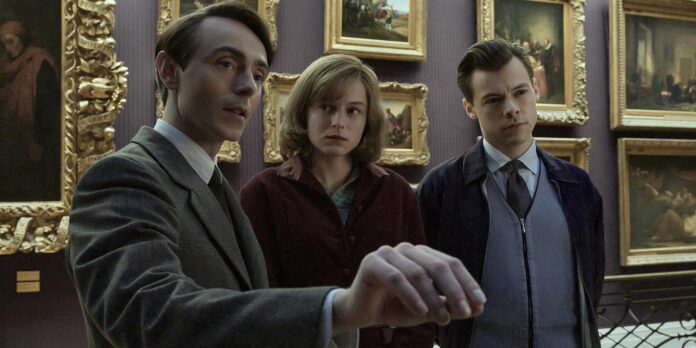 THE STORY – Tom, a policeman in 1950s Britain, falls in love with a schoolteacher on the Brighton coast. However, he soon begins a passionate same-sex affair with a museum curator, in spite of homosexuality being illegal.
​
THE CAST – Harry Styles, Emma Corrin, Gina McKee, Linus Roache, David Dawson & Rupert Everett

Michael Grandage’s “My Policeman” has been on everyone’s lips since it was announced that pop icon Harry Styles was cast in the role of a British policeman dealing with his sexual identity. Having one of the world’s biggest music superstars in a prestige drama is one thing, but the fact that he was playing gay definitely piqued interest levels. If only the handsomely-appointed but airless film was at all worthy of the hype heaped upon it.

When Marion (Gina McKee) agrees to take in Patrick (Rupert Everett) and help care for him after a stroke, her husband, Tom (Linus Roache), is less than pleased. Tom refuses to even look at Patrick, and his relationship with Marion becomes even more strained. Through flashbacks, we learn why: In 1950s Britain, Tom (Styles) was a policeman who fell into a relationship with Marion (Emma Corrin) as part of the conventional life society demanded. But in an effort to improve himself and learn more about art, he also met Patrick (David Dawson), a museum curator who sensed what Tom had not: That he is attracted to men. The two men begin a relationship that they attempt to keep going even as Tom moves ever closer to marrying Marion. As time goes on, Marion, Patrick, and Tom reach a reckoning in both timelines.

The 1950s were a difficult time for gay people in general because being gay was considered a crime. The movies have been making the argument that this is harmful to everyone since at least 1961’s “Victim,” in which Dirk Bogarde starred as a lawyer being blackmailed over his homosexuality. “My Policeman” attempts to do something new by adding the present-day timeline in which the characters reckon with their history and how it has harmed them even more deeply than they realized. This is a valuable conversation to have, but Ron Nyswaner’s screenplay (adapted from the novel by Bethan Roberts) states its themes so bluntly that it invites only head nods of agreement instead of a conversation. It doesn’t help that the film is a slog to get through, only coming to life when Patrick and Tom begin their affair, and Ben Davis’s camera caresses their bodies with a sensuality completely absent from the rest of the film. This isn’t a bad idea in theory – emphasizing how beautiful this relationship is in comparison to the misery that comes from it not being allowed to exist freely – but in practice, it makes the film feel airless, a turgid piece of prestige literary adaptation that presents itself in the most boringly traditional way possible.

Thankfully, the entire cast brings the kind of sensitivity the material needs, lifting the movie above being completely lifeless. The chemistry between Styles and Dawson is palpable, and both men navigate the uneasy dance of figuring out what they’re feeling in a relatively messy way. Corrin is at their level throughout, acing the film’s trickiest part with aplomb. They make Marion feel both pitiable and hateful as she finds herself in the middle of a complicated situation that puts her through the wringer through almost no fault of her own. The younger and older actors are cast very well, each performer effortlessly capturing the essence of their counterpart while still making the part their own. Of the six, it’s McKee who is given the worst dialogue and delivers the best performance, powering mightily through the too-tidy summation at the film’s end through sheer force of will. If the rest of the film had her forceful personality, then “My Policeman” may have been good, a deeply felt piece of longing and regret. Instead, it’s a staid prestige picture like so many others over the years – handsomely-appointed and well-meaning but too dull to be truly worthy.