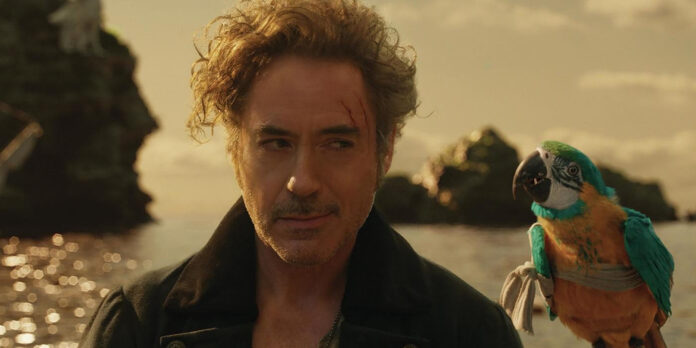 THE STORY – Dr. John Dolittle lives in solitude behind the high walls of his lush manor in 19th-century England. His only companionship comes from an array of exotic animals that he speaks to on a daily basis. But when young Queen Victoria becomes gravely ill, the eccentric doctor and his furry friends embark on an epic adventure to a mythical island to find the cure.

And then, there is Stephen Gaghan’s “Dolittle”.

Reader, “Dolittle” is so bad, so uninteresting, so uninvolving, that I fell asleep during it. And to be fair, it is a film that is bad in a way that looks as though most of the people involved in making it fell asleep while doing so. Who thought that Stephen Gaghan, the writer of such family-friendly visual effects extravaganzas as “Abandon”, “Traffic”, and “Syriana”, was the right person to write and direct another version of the oft-told tale of Hugh Lofting’s Victorian-era veterinarian who has the uncanny ability to talk to the animals? I’m sure there are other writers and directors who would be a worse fit based on their resumés, but I’m hard-pressed to name them at the moment, especially in the (messy, frazzled, ugly-CGI-ed) face of the end product. “Dolittle” is one of the laziest films I have ever seen, taking its name as a mission statement and running with it on multiple fronts.

It is perhaps most disappointing that one of the people doing as little as they can in this film is its star. Robert Downey, Jr. was one of the most interesting actors in Hollywood for years before he found unlikely success as the headliner of the Marvel franchise, and he’s done better and better work over the years playing Tony Stark. But his performance here displays none of his ample talents. Looking for all the world like he is just counting down the days until his next paycheck, Downey puts on a Welsh accent and an unruly mess of hair and plays the good doctor like a sober version of Captain Jack Sparrow – all quirk and no character. But unlike Johnny Depp’s Oscar-nominated performance, there is no joy to be found anywhere here. The character’s arc is one of opening himself up to the world after years of being a recluse following his wife’s death alone at sea, and Downey does the bare minimum in every moment, stopping our empathy with Dolittle dead in its tracks.

And he’s not alone among the performers: The all-star cast providing the voices for the menagerie of CGI animals barely contains a decent performance, with only Kumail Nanjiani and Emma Thompson providing any spark of life. Fortunately, the film has Michael Sheen delightfully twirling his villainous mustache and Antonio Banderas swanning about as a Victorian-era pirate king of sorts providing some level of grand fun. Unfortunately, the film is more interested in fart jokes and badly CGI-ed action sequences than it is in these characters, dispatching with them in a half-hearted way that feels all wrong for the narrative’s supposed antagonists.

And that’s probably the best word that can be used to describe “Dolittle”: Half-hearted. The screenplay rushes through every pro forma kiddie movie beat, and the filmmaking matches it, not taking any time to let most of the jokes and emotional beats land. There is no sense of danger or suspense, even for the children the film was ostensibly made for (although bless his heart, Ralph Fiennes does try to inject some as a hungry tiger). To be fair, there are a couple of cute moments with the animals, and the way the film transitions from Dolittle speaking in the various animal languages to conversing with them in English is well-done. But the film has little sense of joy, fun, and wonder that should be this material’s lifeblood. In place of that, we get John Cena voicing a polar bear who calls everyone “bro” in an otherwise anachronism-free vision of Victorian England. Is this what we’ve come to, Hollywood? A children’s film that can’t even commit to anachronisms properly? And then, to top it all off, the film ends with a perfunctory Sia song extolling the virtues of being “an original, even when it’s difficult.” One has to laugh at that, as nothing in “Dolittle” is in any way original, nor has anyone involved in making it pushed through anything difficult to create something of quality. Reader, you’d do much better to save the money on tickets to see “Dolittle”, and instead take an hour and forty-minute long nap at home.