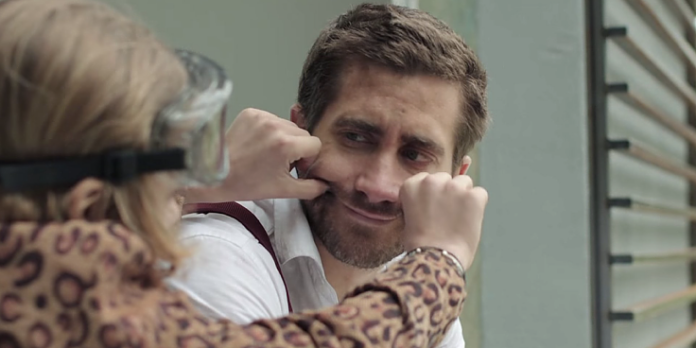 THE STORY – Grieving investment banker Davis Mitchell (Jake Gyllenhaal) returns to work after losing his beloved wife in a tragic car accident. After writing a letter to complain about a vending machine, Mitchell receives a phone call from Karen (Naomi Watts), a customer service rep from the company. Karen becomes moved by his complete honesty, while Davis finds someone to lend a sympathetic ear. As his new friendship with Karen and her son grows, Mitchell finds the strength he needs to rebuild his life.
​
THE CAST – Jake Gyllenhaal, Naomi Watts, Chris Cooper & Judah Lewis
​
THE TEAM – Jean-Marc Vallee (Director) & Bryan Sipe (Writer)
​
THE RUNNING TIME – 101 Minutes

​When experiencing the death of a close friend or family member, there is no specific way one must grieve. We all grieve in our own unique way. In “Demolition,” Jake Gyllenhaal, writer Bryan Sipe, and director Jean-Marc Vallee explore one man’s personal grieving process with mixed results. And all though there is much to say about the grieving process and the film does showcase this personal story in a bizarre way, it ultimately fails to provide resolution for not only the film’s protagonist but for the audience in a satisfactory way.

Davis Mitchell (Jake Gyllenhaal) has an incredible modern home in White Plains New York. He wakes up at 5:30am every day and travels to New York City where he works at an investment firm underneath his father in law Phil Eastwood (Chris Cooper). One fateful day, he is riding passenger in the car with his wife Julia (Heather Lind) and they are involved in a fatal accident which claims her life, leaving Davis in the hospital stricken by the devastating news. He makes his way towards the vending machine and looks to purchase M&M’s when the machine fails to distribute the candy. He writes a complaint letter to the vending company which eventually finds its way to Karen Moreno (Naomi Watts). After many repeated letters (And other odd instances of displayed behavior such as disassembling complex machines) Karen eventually reaches out to Davis looking to help him in the aftermath of his wife’s death.

​Without Jake Gyllenhaal, I’m afraid “Demolition” would be a lesser film than it already is. His likability and acting style lend very well to the character Davis Mitchell, who is having a difficult time dealing with the death of his wife. The tiny amounts of emotion he can squeeze out of such quiet scenes simply due to the power of his eyes is a testament to the quality of actor he has become. Gyllenhaal is supported by Chris Cooper, who also turns in an emotional performance that the audience would typically associate with grief. He and his wife mourn the loss of their daughter in a very normal yet still powerful manner. It’s the scenes that Cooper shares with Gyllenhaal that the film finds its stride in watching two great actors explore such deep emotional territory. However, the scenes that Gyllenhaal shares with Naomi Watts come off as unnatural and unfulfilling. You get the sense that any woman could’ve been cast in the role of Karen Moreno as Naomi Watts fails to make the role memorable. Her son Chris (Played by Judah Lewis in a fine child performance), however, has a terrific chemistry with Gyllenhaal and their scenes together prove to be far more interesting.

Jean-Marc Vallee hires Jay M. Glen as his editor this time around and like his previous films (“Dallas Buyers Club” and “Wild”), “Demolition” has some unique editing. Unfortunately, if you’ve seen the trailer for the film, most of the edited moments play exactly as they are presented in the trailer which robs them of their originality and spontaneity. The only moment that this movie needed to truly succeed was an ending which would provide a sense of closure for the Davis Mitchell character. And while the film’s final moments alludes to this, it’s unfocused and lacks a true gut punch to the already wounded heart that this movie had.

Jean-Marc Vallee and writer Bryan Sipe clearly wanted to tell a personal story that pertains to the David Mitchell character, but their commitment to his story hinders their ability to transport the emotions he is experiencing onto the audience. After an hour and forty minutes, it leaves us all asking “Why should we care?” Gyllenhaal does his best, but the leaps in logic due to Davis’s sporadic and unusual behavior, keep us at an arm’s length from him and we never get as close to the material as Jean-Marc Vallee intended. There’s a moment in the film where Phil tells Davis that “Repairing the human heart is like repairing an automobile.” It’s in this line that the now metaphor seeking Davis decides to take the statement literally and starts tearing down objects piece by piece, and eventually even his own home.  As much as Jean-Marc Vallee wants to deconstruct Davis and his grief, what ultimately lies beneath the surface is an emptiness that is not all that interesting.