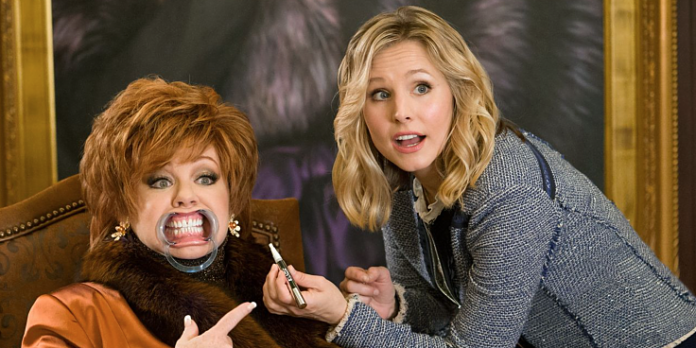 THE STORY – Wealthy CEO Michelle Darnell (Melissa McCarthy) always gets her way, until she’s busted for insider trading and sent to federal prison. After leaving jail, Darnell finds herself broke, homeless and hated. Luckily, she tracks down former assistant Claire (Kristen Bell), the only person who’s willing to help. While staying with Claire and her young daughter, the ex-con devises a new business model for a brownie empire. Unfortunately, some old enemies stand in the way of her return to the top.
​
THE CAST – Melissa McCarthy, Kristen Bell, Kathy Bates, Tyler Labine & Peter Dinklage

Let’s get this out of the way. Melissa McCarthy is very talented. Ever since she burst onto the Hollywood scene in 2009’s “Bridesmaids” (And even managed to snag a Best Supporting Actress nomination, which is a rarity in this genre), she has built up a huge fanbase for herself as the new queen of comedy. After starring in hit films such as “The Heat,” “Identity Thief” and “Spy,” and creating a slew of memorable characters along the way, she now brings us her latest character in Michelle Darnell. And like the rest of her filmography, you never know what you’re going to get. Will it be a huge laugh out loud hit like “Spy?” Or will we get sticker such as “Tammy?” Sadly, Melissa McCarthy remains the highlight of this terribly scripted film while everything else crumbles around her.

​Melissa McCarthy plays filthy rich and filthy mouthed Michelle Darnell. She is a successful businesswoman who has manipulated her way to the top and has made millions. After getting thrown in prison for insider trading, she is released but now finds herself homeless. Her former assistant, a single mother named Claire (Played by Kristen Bell), offers to help her until she can get back up on her feet. Along the way, Michelle decides she is going to help Claire’s daughter’s girl scout team sell brownies and make a business model out of it which will hopefully enable her to reclaim her lost empire. She will have to encounter personal obstacles along the way from not only herself but also her professional rivals such as a samurai loving Ronald (Peter Dinklage) or Renault, as he likes to be called now.

Now while “The Boss” is nowhere near as deplorable as McCarthy and Falcone’s last pairing on “Tammy,” it still doesn’t manage to be nearly as good as the gifted McCarthy deserves. As Michelle Darnell, she is as crass and rude as you can possibly imagine which results in some of the film’s more shocking moments of dialogue. And while Claire proves to be a good foil for Michelle and they both inevitably teach each other something of value by the film’s end, it doesn’t bring anything new to the table. Kristen Bell is not making a complete mockery of her own career in this movie, but she is certainly not on the same level of comedy as she has shown that she can be in films such as “Forgetting Sarah Marshall.” My biggest gripe with this film lies in Peter Dinklage’s performance. Hollywood has still not managed to find meaningful roles for the gifted actor in film after he has showcased to the world what a dynamic actor he can be on television’s “Game Of Thrones.” His part in this film is embarrassing, nonsensical and a total waste of his talents.

The script in this film is pretty poor in its formulaic nature and doesn’t know how to properly construct a good joke. The laughs are completely hit or miss depending on your sense of humor and the third act is a total mess, no matter what anyone tries to tell you. And while I respect that McCarthy wants to work with her husband writer/director Ben Falcone, he’s not a director who is simply capable of getting a good movie out of all of the other elements around her. A brownie troop fight scene that pushes the envelope aside, this isn’t a particularly well-constructed film by any means.

Thank goodness the film is not overly long. It’s merciful as there were a few gags in the film that failed to land harder than others and had me begging for the film to be over. McCarthy however, with all of her big mouthed creative foul language is a blast in this film even if it’s not as great as her other comedic roles. She does need to break away at this point from doing films with her husband Ben Falcone, but at least “The Boss” can claim it’s better than “Tammy.”