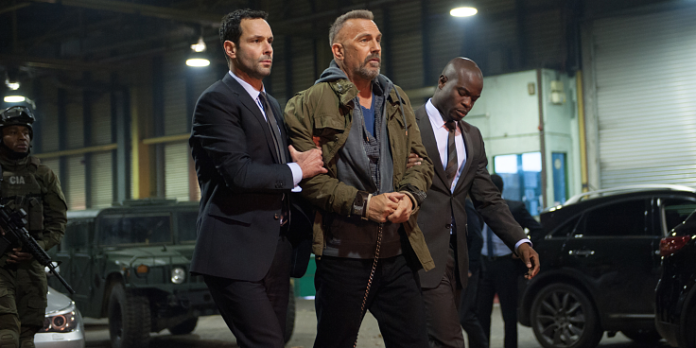 THE STORY – CIA agent Bill Pope (Ryan Reynolds) dies while traveling to a secret location to meet a hacker who can launch missiles at will. Desperate to find his whereabouts, officials turn to an experimental neurosurgeon who can transfer memories from one brain to another. The guinea pig for the procedure is Jerico Stewart (Kevin Costner), a violent and dangerous death-row inmate. Now gifted with Pope’s skills and knowledge, Stewart must race against time to stop a sinister international conspiracy.
​
THE CAST – Kevin Costner, Gary Oldman, Gal Gadot, Ryan Reynolds,Tommy Lee Jones, Alice Eve, Michael Pitt, Jordi Molla, Scott Adkins & Amaury Nolasco

“Criminal” is a criminal film. It’s a crime against the filmmaking world and a crime against the talents involved. The concept of the film is neither “cool” nor interesting as it raises too many questions and leaves the audience confused during its entire 113 minutes running time. The actors should be ashamed to be a part of such a mindless and uneventful film that doesn’t even take the time within its screenplay to get the audiences to care about the characters they are playing. Not even the action scenes can bring anything new to the proceedings and fail to elevate the film in any way.

Taking place in London, CIA agent Bill Pope (Ryan Reynolds) is killed by Hagbardaka Heimbahl (Jordi Molla) who is trying to get from agent Pope the whereabouts of a computer hacker known as “The Dutchman.” Agent Quaker Wells (Gary Oldman), is also looking for “The Dutchman” because he holds the key to the world’s entire security infrastructure which can bring about total devastation should it fall into the wrong hands. He decides to seek out Dr. Franks (Tommy Lee Jones) for a drastic mission to scientifically implant Bill Pope’s memories into the mind of another human being. Due to a procedure such as this never being done on human’s before, the government decides to use the criminally insane Jericho Stewart (Kevin Costner) as their guinea pig. Jericho is still the same person but he now holds Pope’s memories including those of his wife (Gal Gadot) and daughter. Now the once deranged Jericho who could never feel anything is locked up in a top security mission to save humanity and recover “The Dutchman” at any cost.

Kevin Costner should’ve ducked and ran for cover when presented with this screenplay much like how his character Jericho Stewart does in the film’s many shootouts. It’s a miracle that actors of his, Tommy Lee Jones and Gary Oldman’s caliber would ever consider a screenplay so packed with plot holes and storytelling beats which make little to no sense. No one benefits from the poor storytelling on display and no one benefits the film either. Gary Oldman has played this role before as he is pretty much repeating his performance of Commissioner Gordon from Christopher Nolan’s “The Dark Knight Trilogy” albeit much less compassionate and more frantic. Kevin Costner grunts and shoots menacing glares throughout the entire film. Despite his efforts to portray a character arc for Jericho, it fails to earn the audience’s sympathy or confidence seeing as how it is all built upon a lie that is another man’s memories. Speaking of that other man, Ryan Reynolds is barely in the movie enough to build upon the goodwill he gained with “Deadpool” earlier this year. Same goes for Tommy Lee Jones who is barely noticeable and is pretty much sleepwalking through the film in order to get that paycheck. And the less said about Gal Gadot and her wooden emotionless scenes, the better.

While director Ariel Vromen attempts to shoot the action scenes as best as he can, they lack originality and are poorly staged. Shaky handheld camera and nonsensical character beats fail to engage the viewer. With a better story (The concept is interesting but lacks depth and further explanation behind its science) and much better dialogue, this film could’ve been a lot better than what it is. However, what screenwriters Douglas Cook and David Weisberg present us with is action thriller 101 storytelling pampered by ludicrous dialogue that should not have been taking itself too seriously. This is the kind of B-level movie concept that would’ve benefited from a more self-aware script, but what we are left with is a serious action affair which fails to entertain on every level.

“Criminal” has an over elaborate story that takes itself too seriously and is anchored by actors who look like they could care less. And they’re right. The script is lacking any dramatic flair which would excite any self-serious actor looking to push themselves as artists. The comedy doesn’t work (And believe me, with the Jericho character, they certainly tried), the drama doesn’t work, and the action doesn’t work. All we’re left with is a criminal film that just so happens to be called “Criminal.”