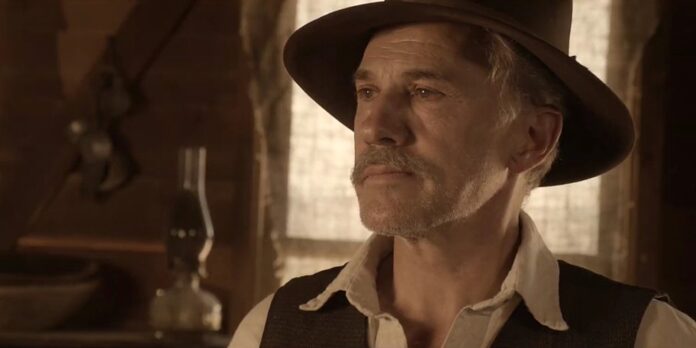 THE STORY – Veteran bounty hunter Max Borlund is deep into Mexico where he encounters professional gambler and outlaw Joe Cribbens – a sworn enemy he sent to prison years before. Max is on a mission to find and return Rachel.

Once upon a time, Walter Hill invented the entire concept of the buddy cop movie with “48 Hours.” It was the perfect mix of gritty action and comedy. That is enough to make any film with his name attached worth paying attention to. Having an action classic like “The Warriors” to his name and a strong western like “The Long Riders” only helps things. Here’s someone who knows how to make an excellent shoot ’em up film. So when you take Walter Hill, and you pair him with actors as entertaining as Christoph Waltz and Willem Dafoe, it has to be entertaining, right? As it turns out, the answer is not really. Like Adrian Lyne with “Deep Water” earlier this year, the 80s director’s big comeback is largely a disappointment.

“Dead For A Dollar” starts promisingly. You have an ominous cowboy figure stomping up to a door while an Ennio Morricone-esque score wails in the background (classic western stuff). And then you hear oddly fake gunshots (tinny, audio library sample gunshot-sounding). It’s weird and jarring, but maybe it’s a stylistic choice. But as the story unfolds, that strange (or incompetent) stylistic choice proves to be the rule, not the exception. See, “Dead For A Dollar” isn’t interested much in presenting a coherent story, and that’s fine. Many films aren’t. They compensate with rich characters, or in the case of many shoot ’em ups, robust action, and impressive aesthetics. But “Dead For A Dollar” is light on action and aesthetics, making it indefensible.

For starters, it’s hard to tell if the film is poorly lit or if the color correction is just such an abomination that it ruined whatever work was done on set. The film looks as though someone was considering opting for a full-blown sepia look but wasn’t willing to commit, so everything is kept in ugly flat shades of light brown. The contrast is bumped way down. Maybe the idea is to showcase the blown-out feel of the sunny west, but it could not have rendered the film any less engaging to look at if it had tried. Then you have the framing. Walter Hill has opted for tight shots before. If you look at “48 Hours,” he’s not a filmmaker who necessarily captures depth in the frame. But here, you have shallow shots that are confusingly framed. He employs negative images where the empty space seemingly serves no purpose. Two characters are talking on one side of a wide frame with nothing happening on the other, but the negative space isn’t appealing looking. It just feels sloppy. At other times, the frame features the corner of an actor’s face stuffed into the frame, but not the rest. It’s as though Hill was desperate to cram as many figures in each frame as possible to cut down on the amount of coverage needed. The sets and costumes don’t help these other choices as everything looks cheap. Presumably, this was a low-budget effort, but a director as experienced as Hill ought to know how to cover up a small budget more effectively with thoughtful visuals. Hill has made enough films that presumably many of these decisions were intentional, but they’re off-putting. On top of that, you have the editing. Dissolve transitions aren’t inherently bad, but they certainly are when utilized the way this film does. “Dead For A Dollar” uses so many dissolves within scenes and as scene transitions that, at times, the whole project feels like a student film. The dissolves are especially jarring because he uses them to transition between shots that utilize noticeable camera movement, causing a jumpy effect.

These clunky aesthetic decisions hinder the action that ought to be the film’s standout. For example, there is a scene involving two characters essentially performing a sword fight with whips instead of swords. Still, the camera fails to capture much of the action, wobbling about in an unfocused handheld style, relying instead on sound effects to imply that the battle is occurring. Maybe the stunt budget was low? But the whip crack sound effects are the same type of cheap canned sound effects as those used in the early gunshots. The result is an unintentionally funny scene that squanders such a fun concept.

All of this could have been forgiven if “Dead For A Dollar” had a better script, but the writing was clearly an afterthought here. The screenplay is stuffed full of far too many characters for the film’s runtime. The story is ambitious, but it only has time to do the most surface-level investigation of each character, resulting in a sea of muddled motivations. On the one hand, the film is set up to sort of be a buddy film featuring the odd couple of Christoph Waltz’s morally ambiguous bounty hunter alongside a straight-laced, innocent soldier (Warren Burke), following the usual trend of mutual disdain transforming into grudging respect. But Hill also wants to spend time as a revisionist western, admirably exploring the plight of Blacks and women in the old west. Thus, you have suffragette Rachel Brosnahan on the run from her abusive husband (he says a runaway Black soldier kidnaped him, but it becomes clear that there is more than meets the eye). You have a wealthy Mexican bandit eager to maintain control of the territory, his attorney and a British attorney working on land deals, a group of conflicted Mexican soldiers hoping to maintain law and order in their town, and a politically ambitious American businessman eager to suppress harm to his name, and maybe reclaim his wife. And, of course, you have Willem Dafoe as a former bank robber and longtime nemesis of Waltz’s who wants nothing more than to kill him. Naturally, all these plot threads come to a head but do so in ways that feel forced. Character motivations shift constantly. They’re introduced and dispatched in ways that feel anticlimactic. It all feels overstuffed. And the film takes its sweet time, yet there isn’t much of a payoff. You know the film has to come down to a showdown between Waltz and Dafoe, but when that showdown comes, it’s practically a blink, and you’ll miss it affair.

Hill wanted to tackle so much with “Dead For A Dollar,” but he couldn’t commit to all these plot threads, and the lackluster aesthetics can’t salvage it. Some of the shootouts are competently executed. Over-the-top moments involving explosions of glass or bodies falling into fountains unleashing huge splashes of water are fun to watch and remind us of the action sequences Walter Hill is capable of in his better movies. And occasionally, those big swooping camera movements showcasing gangs of bandits riding across the desert on horseback look pretty cool. Waltz and Dafoe are as competent as ever. They’re kept separate for most of the film, so whatever chemistry they have is rarely showcased. The normally strong Brosnahan is unfortunately flat. Hill often opts for more archaic western dialogue (though he’s unwilling to go full “Deadwood” and commit to it), and her line delivery often feels clunky. Both Benjamin Bratt and Hamish Linklater are underused as villains.

Waltz is playing a more cynical version of his “Django Unchained” character, and the idea of a jaded mercenary rediscovering principles is undoubtedly engaging. The exploration of Blacks in the old west military and progressive women in the old west are worth diving into. And some of the film’s many characters suggest interesting backgrounds. But nothing is committed to by Hill. There’s an insufficient exploration, and because of this, it’s a film that limps along, unfocused, exploring concepts here and there and at the expense of any sense of tension whatsoever, building to an abrupt and anticlimactic ending. Walter Hill can be admired for wanting to make a gritty western, but his work here is simply not up to the standards set by his past films. It’s a forgettable, sloppy, and cheap-looking exercise that lets down its impressive array of actors.