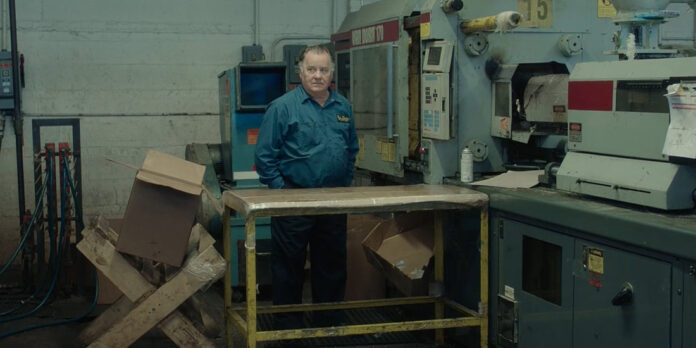 THE STORY – An older factory worker continues to work during a shutdown.
​
THE CAST –  Peter Gerety, Billy Brown & Talia Shire

“A man takes a job, you know? And that job – I mean, like that – That becomes what he is. You know, like – You do a thing and that’s what you are.” That’s a line taken from Martin Scorsese’s 1976 film “Taxi Driver” and it has always stood out to me as a life-lesson on how to view one’s own job. It’s inevitable that your job will be a huge cornerstone in your life. Most of your day will be spent at your place of work. But how far do we let it take over who we are? “Working Man” examines blue-collar workers whose jobs are all they have left and what happens when you take those away from them. It’s a quietly impactful independent drama with its heart in the right place. Only issue is that this heart is very big and is beating loudly. So loud in fact, that it continuously overwhelms and distracts us from how great “Working Man” should’ve been.

New Liberty Plastics is a blue-collar factory in a small suburban town somewhere in Rust Belt America that is closing its doors. As a result, all of the factory workers will be without a job. This includes Allery Parkes (Peter Gerety), who has been with the company for decades and has even said no to retirement so he can continue to keep on working. Even on the day of the lay-offs of his co-workers and himself, he still stays till the end of his shift before collecting his final paycheck. He takes his lunch box and walks back home to his loving wife Iola (Talia Shire). However, the next day, he wakes up at the exact same time, gets ready, takes his lunch box and begins walking to work much to the chagrin of his laid-off co-workers who look on from a nearby patio with confusion as to what is driving Allery to go back to a job that no longer exists for him. “It’s just something I need to do,” he says. And despite pressure from the parent company executives and the local authorities, Allery keeps coming back to work, inspiring his former co-workers to do the same. He is a reluctant leader in this movement until his neighbor Walter Brewer (Billy Brown) steps in and begins to take control of the protest for his own reasons.

“Working Man” is shot pretty well, with a muted color palette that highlights the actor’s performances above all else. Peter Gerety, Walter Brewer & Talia Shire all receive a lot of dramatic moments to allow their characters to breathe and take control of the screen in different ways. Peter Gerety though is an immense standout as his quiet and internalized performance conveys a lot. He has very little dialogue for a majority of the movie and even though we don’t know much about him at first, other than he is a long-time company man who simply wants to do his job, Gerety is our moral compass who takes us on this sentimental journey of not only the workers looking for purpose but also for one man to rediscover his again. When we eventually do realize why Allery is reserved and emotionally withdrawn from those around him, despite the movie’s own heavy hand, it still ripped my heart out and packed an emotional wallop.

The leisurely pacing of “Working Man” may try audience member’s patience for such a simple story though, especially one that spells out its themes as blatantly as this one does. It’s trying very hard to have its message resonate with grandstanding and on the nose dialogue, accompanied by a heavy piano-based score so that we feel emotion when the film wants us to feel emotion. It doesn’t help that outside of the score, there is also some noticeable background hissing of sound during scenes that couldn’t properly be recorded or cleaned up. Couple all of this with inauthentic dialogue for all of the supporting actors and extras outside of the three main leads and what you have is an earnest movie that wants us to be coerced into thinking its as good as it thinks it is.