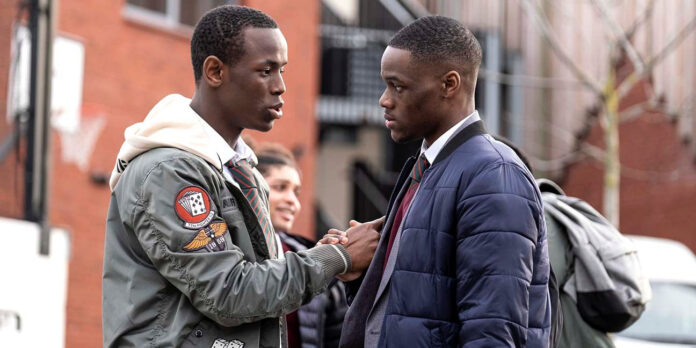 THE STORY – Best friends Timmy and Marco go to the same high school in Peckham, but live in neighboring London boroughs. When Marco gets beaten up by one of Timmy’s primary school friends, the two boys wind up on rival sides of a never-ending cycle of gang wars in which there are no winners — only hapless victims.
​
THE CAST – Stephen Odubola, Micheal Ward, Eric Kofi-Abrefa, Khali Best, Karla-Simone Spence, Richie Campbell, Jo Martin & Junior Afolabi Salokun
​
THE TEAM – Rapman (Director/Writer)
​
THE RUNNING TIME – 91 Minutes

Director/writer Andrew Onwubolu (otherwise known as “Rapman”) draws on his own personal life for his directorial debut to tell a tragic (some might say blue) story in “Blue Story.” It uses electrifying fourth wall breaking rap to tell its story of two friends who’s lives spin out of control in a never-ending war of gang violence through the streets of South East London. It’s a horrible and heartbreaking viewing experience as we witness two young men’s friendship needlessly disintegrate over the course of 91 minutes into murder and revenge.

Timmy (Stephen Odubola) and Marco (Micheal Ward) are best friends at the same high school in Peckham, London. One day, Marco is severely beaten up by one of Timmy’s friends simply for being the younger brother to “Switcher” (Eric Kofi Abrefa) who runs a rival gang. When Marco turns to his brother for help and revenge, it sets off a downward spiral for both Timmy and Marco as allegiances are formed, friendships are tested and lives are forever altered in a war that has no end and takes casualties on both sides.

What makes “Blue Story” so captivating and thrilling are the wonderful performances from Stephen Odubola, Micheal Ward, and honestly, the entire cast. Stephen Odubola and Micheal Ward, in particular, are both incredibly natural and convincing as the story drops us years into their relationship. The casual behavior and banter between the two show that Odubola and Ward have done their homework to bring the rich history of these two young men to the screen and as a result, we’re bought in early. These are people who want what any person their age wants: to do well in school, go to parties with friends, chase girls, etc. However, like many of the great Shakespearean tragedies, their worlds, and their paths are set by where they are born, who they’re related to, and who they interact with. This is all the more impressive when both characters undergo serious transformations midway through the film, showing us through their performances the toll this conflict has taken on both of them.

Connections in “Blue Story” can be a matter of life and death as the two rival gang’s hatred grows with each transgression; neither coming to the table with a peace offering or a solution…only more violence. That violence builds and builds until there is a breaking point, an unexpected time jump, and then a surprising character evolution, drowning this movie in a bleakness that feels inescapable. By the time we reach the film’s incredibly tense ending, one wonders where everything went wrong and how it all could’ve been avoided. Rapman’s direction helps to guide us to that complex point of no return with intense exhilaration, while never sacrificing the strong character work needed for the film’s emotional core. Otherwise, (and the film does come close to this point at times) I fear I would be left asking what was the point of it all? Such a dark reality may be too hard for some viewers to connect with but everyone involved with “Blue Story” does an admirable job of supporting Rapman’s story.

“Blue Story” contains enough shocking story developments and strong character progression to push us through its endless and unnecessary gang warfare. The film does suffer from having flat cinematography which is disappointing for such an energetically paced film but Rapman’s directorial flourishes, such as the fourth wall breaking raps which recap segments of the story to the audience and his command over the material, plus his deep connection to the story, all weaves together to create a dark story that is worth telling. His characters might be talking a big game with no moral code but Rapman’s voice is doing anything but.