“WON’T YOU BE MY NEIGHBOR?” 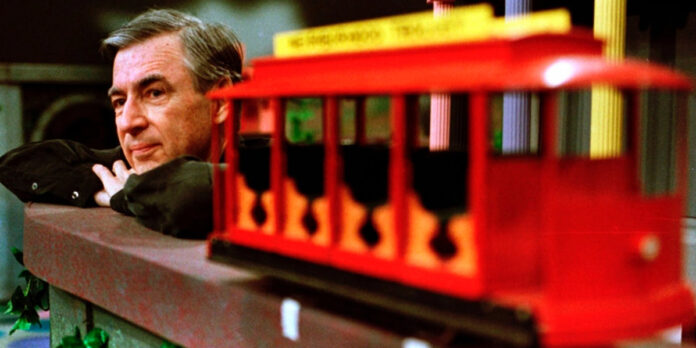 ​In a world of bleak negativity, it is often useful to be reminded that genuinely good people do exist. And as three generations of kids can attest, who was more genuinely ‘good’ than Mr. Rogers? “Won’t You Be My Neighbor” digs deep beneath the skin of the children’s television icon, revealing a complex figure who channeled his own insecurities into one of the most influential television shows in history. Funny, touching and not afraid to pull punches, the film shows us an unflinching look at one of those genuinely ‘good’ people.

“Won’t You Be My Neighbor” charts Fred Rogers’ rise from aspiring Christian minister to a joke of low-budget local television to ultimately a staple of American television. In the process, he subtly protests the Vietnam war, advocates for civil rights, almost singlehandedly saves educational television, and most importantly, squeezes his way into the hearts of almost every child in America.

The film begins with an interviewee reminding the audience that “just about everything you associate with good television…Mr. Rogers’ Neighborhood was the opposite of that…low production values, an unlikely host…but somehow it worked.” As a live-action full-sized recreation of Mr. Rogers’ famous train draws us back into his famous ‘Neighborhood,’ the film sets out to determine just what exactly it was that made this unlikely show work and made this soft-spoken man so magnetic.

The film serves a multitude of functions, acting as much more than a mere biopic. On one hand, the film serves as the world’s most in-depth DVD Making-of feature for the show itself. For example, the film shows how the show’s gleefully low-budget aesthetic was developed: Roger’s stock footage broke down, and he was forced to don a sock puppet to fill dead air. We see no end to goofs and errors that occurred on set. We also see how Fred Rogers handled them with dignity and grace and we see the side of Mr. Rogers that knew how to serve as a producer and showrunner, navigating a variety of personalities. For example, at one point, we learn that one crewmember kept using on-set cameras to take pictures of his nude butt. In retaliation, Rogers had one of the pictures transformed into a poster and gifted to the crewmember for Christmas.

On the other hand, the film is a deep character exploration. And yes, everyone on screen is convinced that Fred Rogers is just something short of messianic, but at the same time, his friends and family still acknowledge his shortcomings. Although he embraced a gay cast member as a friend, he refused to let the man be seen as gay publicly for fear that the realization might taint the show’s reputation. We also see how Fred Roger’s stubbornness refused to allow him to adapt with the times. As the film points out, he became his stubborn “King Friday” character from his show overtime, unable to accept changing times and tastes. And he was fundamentally unable to voice his anger and insecurities as Fred Rogers. His kids pointed out that he literally would transform into his characters at home if he ever had to express any negative emotions. And, if the film is to be believed, Rogers struggled with many of these negative emotions. Many of the show’s characters and themes seem to have stemmed from Rogers’ own insecurities stemming from childhood bullying.

At the same time, the film is far more interested in reminding us just how good every other aspect of Fred Rogers was. We see Rogers cheekily protest the Vietnam war within his first ever week of episodes. During the Civil Rights struggle, Mr. Rogers allows a black castmember to share a kiddie pool with him, as a clear jab at ‘Whites Only’ pools. We see him singlehandedly convince a Senate subcommittee not to defund public television just by singing a song. And most importantly, we see just how deeply Fred Rogers loved and understood children. He understood how their minds worked and could find ways to explain weighty concepts like assassination to children in a way that they could understand. And most importantly, we see how Fred Rogers wanted to make sure everyone was loved.

Roger’s own experience with bullying caused him to make it his life’s mission to help other children make it through tumultuous childhoods unscathed. Thus, in eras where John Wayne and later, Arnold Schwarzenegger were the symbols of masculinity, Rogers unabashedly presented an alternative image of manhood. One that was every bit as influential. And as such, when we see comedians in later years mock Mr. Roger’s amiability, we see how it hurts him. And we see how he shrugs off the pain and moves forward trying to do good.

Ultimately, the film is a thorough and endearing at a good man. It’s not hard-hitting journalism per say. There isn’t an effort here to question Mr. Rogers’ intentions. Instead, this is a film that aims to celebrate Mr. Rogers for his triumphs and his (Few) flaws. The filmmaking on display isn’t too complex.  There is little more than just interviews, TV clips, and a bit of B-Roll here and there, but the raw story is compelling enough to compensate. Oh and Jonathan Kirkscey’s score is lovely.

Most importantly, “Won’t You Be My Neighbor” just reminds us that human beings can be really, really good to each other and that we can weather hardship in the process. It’s a rallying cry for kindness. And in this day in age, that’s really all we need.

THE GOOD – A thorough biography that honors the man, but also shows us his few flaws, presenting a balanced viewpoint.

THE BAD – The filmmaking plays it safe from a technical standpoint.
​
THE OSCARS – None
​
​THE FINAL SCORE – 9/10