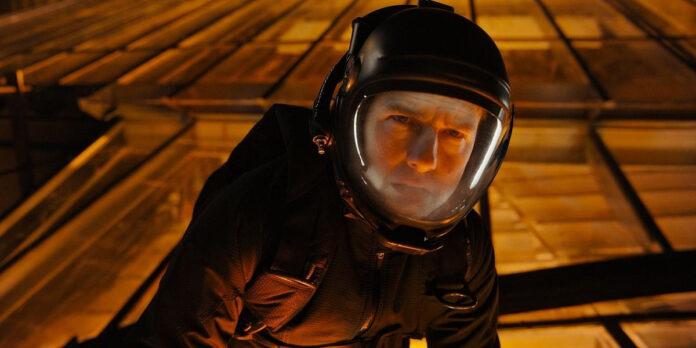 THE STORY – The best intentions often come back to haunt you as Ethan Hunt, his IMF team and some familiar allies find themselves in a race against time after a mission goes wrong.

​​“The end you always feared is coming, and the blood will be on your hands.”

Following the events of “Mission: Impossible – Rogue Nation,” Tom Cruise and the team returns for a more direct sequel than we’ve seen in this series before. “Fallout” continues to raise the stakes in this more than twenty-year-old franchise but it’s still as fresh and exciting as ever. Director Christopher McQuarrie becomes the first person to direct two entries in the franchise, a move that helps to link “Rogue Nation” and “Fallout” even more. This latest film brings all the breathtaking action and globe-trotting espionage you expect from “Mission: Impossible” without skipping a beat.

After choosing to save the life of a friend instead of completing a mission, Ethan Hunt (Tom Cruise) has a target on his back. More accurately, he has a Henry Cavill aka. “Superman’ on his back. The CIA is losing trust in Hunt and assigns their brute August Walker (Cavill) to accompany him as they clean up Hunt’s mess. When the IMF captured Solomon Lane in “Rogue Nation,” they unintentionally created a power vacuum, allowing a new and worsening threat to take the place of the Syndicate.

“Fallout” looks nothing like most blockbusters today. The cinematography and locations are gorgeous and unique. Shot with such realism and grit, everything feels grounded and tangible. This sells every stunt in the film, along with Cruise’s dedication. A motorcycle chase through the streets of Paris is particularly gripping. The audience feels every bump and crash. There’s not a second of that chase that feels false or staged. This is the greatest strength of the film: believability. Every stunt, big or small, is executed to perfection. A bathroom fight (Teased heavily in the marketing) likely stands as the best fistfight in the series so far. And a full-scale helicopter chase makes for a truly thrilling set piece. We just don’t see this level of stunt-work that often anymore, at least not since something like “Mad Max: Fury Road.”

Hunt’s love for his team starts to get in his way more than it has in the other films and it challenges whether he can actually make sacrifices for the good of the world. Benji Dunn (Simon Pegg) and Luther Stickell (Ving Rhames) return to support Hunt, along with the enigmatic Ilsa Faust (Rebecca Ferguson), who remains mysterious. Vanessa Kirby’s “White Widow” steals every scene she’s in. She’s completely unpredictable and a true wild card from beginning to end. Henry Cavill makes for a fantastic addition to the series. He’s imposing, powerful, and completely intense. This seems like the first film to truly utilize Cavill’s strengths and he’s never been better than he is here. They definitely could’ve used a fake mustache but the less said about that debacle, the better.

Like any good spy thriller, the plot can get complicated. Thanks to smart writing and great delivery, it’s complex but never once convoluted. The stakes are clearly communicated and they’re high. There are multiple brilliant twists and turns that truly caught me off guard. Better yet, the stakes never feel too big that they overshadow our heroes. While they’re saving the world from terrorist organizations, we still remain grounded in the fate of the IMF team. More than the other films (And other blockbusters too), “Fallout” spends time clarifying and diving deeper into the relationships between Hunt and his team giving us more reasons to care than just the standard action scenes.

Some may argue that this is just more of the same and no different than the previous entries. That’s tough to argue against but it’s easy to not be bothered by it when the action, characters, and storytelling is this exquisite. Even in their sixth installment, the “Mission: Impossible” films remain a breath of fresh air amidst the CGI-fueled superhero spectacles of the summer. “Fallout” feels so much more authentic. Like “Rogue Nation” before it, this film is exhilarating, gripping and I can’t wait for more missions from Ethan Hunt and the IMF team.