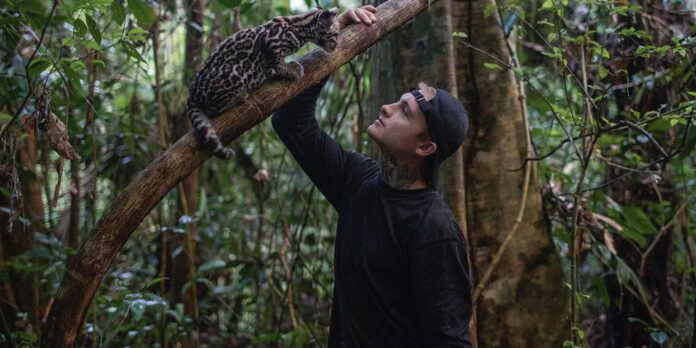 THE STORY – Back from war in Afghanistan, a young British soldier struggling with depression and PTSD finds a second chance in the Amazon rainforest when he meets an American scientist, and together they foster an orphaned baby ocelot.

When I first saw the poster for the new documentary feature “Wildcat,” I was worried. A heavily tatted-up guy rubbing noses with a baby ocelot? Hoo boy, it looked like “My Octopus Teacher” in the jungle, and I wasn’t in the mood for that. To my great relief, however, what I got with the film itself was something decidedly different — a documentary that is often inspirational, at times even frightening, and always dramatically compelling.

“Wildcat” is set in the Peruvian Amazon where Samantha Zwicker, an American graduate student, has founded Hoja Neuva, a rescue shelter where animals, usually babies, are welcomed after being turned over by loggers or rescued from being sold in markets. At Hoja Nueva, animals are medically treated and given a chance to lead a healthy new life in relative safety. Samantha is soon joined by Harry Turner, a young British veteran of the Afghanistan War, who, as a result of his war experiences, has been diagnosed with severe depression and PTSD. Not wanting his emotional struggles to affect his family in England, Harry has packed up and moved to the jungle, a place where no one will know him and where he can do meaningful work.

Samantha and Harry, who form a professional bond (as well as a personal one), soon take particular interest in one special project — the reintroduction of baby wildcats into the jungle by teaching them how to survive in the wild, a feat never before accomplished. To chronicle their work, the researchers track their progress via video and are soon joined by filmmakers Melissa Lesh and Trevor Beck Frost to help them form a complete record of their efforts. When their first try with a baby ocelot tragically fails, Harry falls into a deep funk that lasts for months, a step backward that particularly worries Samantha. Harry’s depression lifts, however, when he’s given a second chance by the arrival of a new baby, an ocelot that Harry and Samantha name Keanu.

As Harry fully throws himself into his training and care, Lesh and Frost’s cameras capture the newfound joy he experiences as he and Keanu bond. Underneath the apparent happiness, however, Samantha is coming to the disturbing realization that Harry’s precarious mental stability is tied to Keanu’s success — if the cat fails, so does Harry. And Keanu does occasionally fail, coupled with her increasing number of mandated trips back to Seattle to finish her degree, which sends Harry’s emotions spiraling. Often brutally honest in his interviews with Lesh and Frost, Harry readily shares that he feels he must cut himself in order to feel pain that will stop the panic attacks that threaten to overwhelm him.

When Samantha returns, Harry’s open talk about committing suicide sends her on a five-hour trip to town to call a suicide hotline to find some direction so that she can do something…anything…to help her friend (She was raised in an abusive household by an alcoholic, so she knows the signs). We feel her helplessness because we have also come to care about Harry. As unsparingly shot as Lesh and Frost’s confessional scenes with Harry may be, they are also filled with enormous empathy. As Harry is allowed to share with us his fears about his mental stability, we empathize with him in a way that only raises the emotional stakes. As Harry drifts closer to his brink, we move closer to the edge of our seats, hoping against hope that the worst doesn’t come to pass.

Almost lost amid all the human drama onscreen is the remarkable achievement of reintegrating Keanu to live freely as a wild ocelot in the jungle. The loving care for animals demonstrated at Hoja Neuva may be a cause for hope for the environment in “Wildcat.” Still, the ominous sound of chainsaws cutting down trees in the encroaching deforestation of the Amazon is ever-present throughout the film as well. Lesh and Frost never use a heavy hand in the film’s environmental message, as they take pains to depict the surroundings where the drama unfolds as almost a character in itself.

Just as we watch little Keanu floundering his way as he navigates his way toward a new life in the jungle, so too do we see Harry start his challenging journey toward a stable new life ahead. Lesh and Frost have built a large empathetic space in a small jungle area in “Wildcat,” following lives that are rich in promise yet are still fragile in their emotional state of mind. Unexpectedly, with “Wildcat,” what begins as an intriguing chronicle of animal behavior becomes a richly satisfying portrait of a human one, as well.

<b>THE GOOD - </b>What begins as an inspiring nature documentary about a rescue mission for baby animals in the Peruvian jungle takes a compellingly dramatic turn when one of the mission members, an Afghanistan vet suffering from PTSD, finds that his mental illness has come roaring back while working hundreds of miles away from civilization.<br><br> <b>THE BAD - </b>The drama surrounding the vet's mental condition is so consuming that the team's landmark work of successfully reintegrating a baby ocelot back into the jungle becomes almost an afterthought.<br><br> <b>THE OSCAR PROSPECTS - </b>None<br><br> <b>THE FINAL SCORE - </b>8/10<br><br>"WILDCAT"