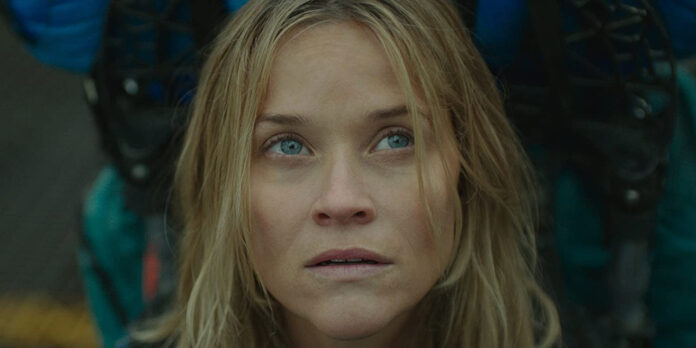 THE STORY – Driven to the edge by the loss of her beloved mother (Laura Dern), the dissolution of her marriage and a headlong dive into self-destructive behavior, Cheryl Strayed (Reese Witherspoon) makes a decision to halt her downward spiral and put her life back together again. With no outdoors experience, a heavy backpack and little else to go on but her own will, Cheryl sets out alone to hike the Pacific Crest Trail — one of the country’s longest and toughest through-trails.

5/14/2020
​By Nicole Ackman
​
To say that “Wild” is an adventure drama doesn’t quite capture what makes the film so engaging. Jean-Marc Vallée’s film is based on the memoir by Cheryl Strayed of her experience hiking 1,100 miles of the Pacific Crest Trail. Yet, at its core, it’s actually about a woman coming to terms with her tragic past, including the death of her beloved mother, and figuring out how to forge a future for herself. Reese Witherspoon stars as Cheryl with Laura Dern playing the role of her mother, Bobbi.

Witherspoon and Dern are joined by a large ensemble cast, including Strayed’s real-life daughter as the child Cheryl in flashbacks. Strayed herself has a cameo in the film as the woman who drops her character off at a motel in the opening. Nick Hornby’s (“Brooklyn“) screenplay adapts Strayed’s 2012 memoir, “Wild: From Lost to Found on the Pacific Crest Trail” for the screen, cleverly keeping the focus tied to Cheryl herself. As such, Witherspoon is rarely off-screen except in childhood flashbacks. Witherspoon was a producer on the film as well, which was made by her production company, Pacific Standard.

Cheryl’s story about physical exertion, taking control of your own life, and coming to terms with your past makes for an emotional and touching film. The movie is honest about the realities of camping and hiking; it doesn’t seek to glamorize it but rather shows how Cheryl struggles to adapt from having purchased the wrong kind of gas for her stove to running out of water. The film opens with its most gruesome scene, as Cheryl deals with an injury but afterward, “Wild” is more of a character study than an adventure film. We follow along and see Cheryl meet all kinds of different people along the trail, experiencing surprising acts of kindness.

The story is littered with flashbacks to Cheryl’s earlier life, in childhood, as a college student, and in the years leading up to her journey. Vallée captures how we experience memory in a fascinating and very authentic way as some sequences are longer and more drawn-out, but others are simply rapid editing flashes. It’s an untraditional way to tell a story, but one that certainly pays off as Cheryl’s past is revealed to us bit by bit.

In these memories, we relive the hardest experiences of Cheryl’s life alongside her from her mother’s illness to her time doing drugs after her mother’s death. Laura Dern may not have a large role, but she is very effective as Bobbi, bringing across Cheryl’s mother’s optimism despite her difficult life. The sound mixing in the flashbacks is particularly impressive in how it elicits an emotional response.

The movie is centered around Witherspoon though, and she delivers a stunning performance. She might be best known for lighter films like “Sweet Home Alabama” or “Legally Blonde,” but “Wild” is a reminder that she can give a great dramatic performance. It’s a totally unglamorous role; we’re allowed to see her sweat (imagine that) and she’s genuinely carrying a heavy backpack in many of her scenes. She essentially plays three versions of the same character: the current Cheryl on the trail, plus her college-aged self and her heroin-addicted self in flashbacks. If Witherspoon isn’t entirely believable as a college student (particularly considering Dern is only nine years older than she is), she makes up for it with how shockingly believable she is as a grieving drug addict.

Beyond Witherspoon’s performance and the story itself, the film is worth watching for its beautiful visuals. The cinematography by Yves Bélanger is laudable, particularly the shots of the trail itself. The movie was filmed on location in California and Oregon and the scenery is stunning. As mentioned before, Vallée’s editing and the way he weaves Cheryl’s memories into her current timeline on the trail is also great visually speaking.

Witherspoon and Dern were nominated for the Oscars for Best Actress and Best Supporting Actress though unfortunately neither won. Watching a film in which a character spends a decent amount of time alone on a trail is interesting while isolated in quarantine. However Cheryl herself points out, “I think I’m lonelier in my real life than I am out here.” Being so aware of the more isolated moments makes her interactions with other people she meets seem even more exciting and even more precious. “Wild” received mostly positive reviews when it was released and six years later, it absolutely still stands up.