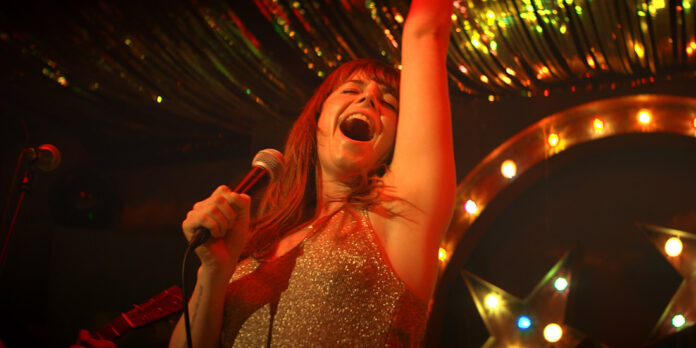 THE STORY – Fresh out of prison, a Scottish woman juggles her job and two children while pursuing her dream of becoming a country music star. She soon gets her chance when she travels to Nashville, Tenn., on a life-changing journey to discover her true voice.​
​
THE CAST – Jessie Buckley, Sophie Okonedo & Julie Walters

​​​​Jessie Buckley impressed a lot of us last year with the independent film “Beast” where she made her acting debut on screen as a small town girl caught up in a dangerous relationship. She has since been seen in HBO’s mini-series “Chernobyl” and will next be seen in the biopic “Judy” later this year but right now, she leads another independent film called “Wild Rose.” With a stage and singing background already in place prior to making her way to the screen, Jessie Buckley now gets the chance to show everyone the caliber of actress she truly is with “Wild Rose.” Balancing wildness with nuisance, Jessie Buckley makes this tiny film about motherhood and pursuing your dreams worth the watch.

Rose-Lynn Harlan (Jessie Buckley), is a Scottish woman living in Glasgow, who has just been released from prison after a 12-month period. Wearing an ankle bracelet, in need of work and coming home to her two young kids, she finds herself at a crossroads in her life. Her mother Marion (Julie Walters), has been taking care of her two children while she has been away and the two do not reunite smoothly as Rose-Lynn chooses to abandon her responsibilities as a mother in order to pursue her dream of becoming a country music star. It’s something that she certainly has the talent for and eventually receives the opportunity from her friend Susannah (played by Sophie Okonedo) to travel to Nashville Tenessee to do, but should she?

If you feel like you didn’t get enough praise for Jessie Buckley from the opening paragraph, I’m not about to stop there. Singing on stage with a magnetic stage presence and commanding our emotions in the smaller, more intimate moments on screen, Buckley delivers a performance which will surely go unrecognized come awards season but it will hopefully get many who missed her debut in “Beast” the chance to see what she can do as a performer. Getting the opportunity to sing live and to win over our hearts through an exceptionally crafted character arc, Rose-Lynn Harlan is a wonderful role for the promising actress.

We start off not having much affection for Rose-Lynn as we see her selfishly pursue her dreams of becoming a country (Not country western — as she’ll be quick to correct you) star despite her children’s natural need for a mother, who has been absent for the past year. Slowly, as new opportunities present themselves, we see her character change and it’s a change that is quite profound and does a sufficient job of eliciting an emphatic reaction from the viewer despite the character’s initial flaws. This is such a testament to writer Nicole Taylor, who creates a fully dimensional character we can go on a true journey with and learn something along the way but its Jessie Buckley who brings her to life and gains our affection and respect. It also helps that she is sharing the screen with two other terrific actresses in Julie Walters and Sophie Okonedo, each of them representing something different on the film’s theme of motherhood.

“Wild Rose” may be a small film that could get lost in the shuffle but Jessie Buckley’s star-making performance should certainly turn a few heads (You’ll probably be impressed to find out that she’s not Scottish but is actually Irish) and get people to take notice of what a phenomenal talent she is. The film also features great music, even if you’re not a country music fan (which I’m admittedly not) and some valuable life lessons on sacrifice, responsibility, and choice. It’s a small film with a big heart, almost as big as the doors this will surely open for Jessie Buckley’s future.