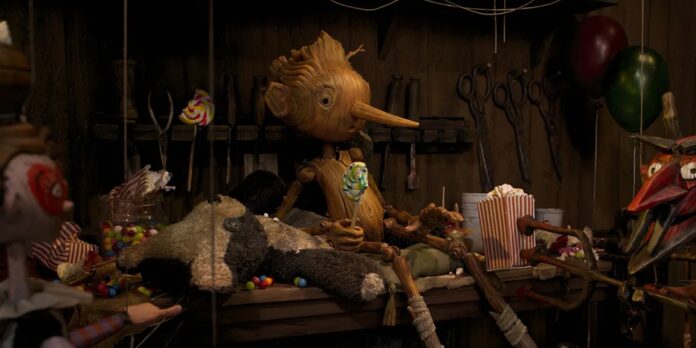 Oscar predictors have “Guillermo del Toro’s Pinocchio” on their radars for nominations for Best Animated Feature (and an upcoming win), Best Original Score, and Best Original Song for “Ciao Papa.” But all of this ignores arguably the film’s most impressive trait: its tremendous achievement in production design.

No animated film has ever been nominated for Production Design. However, “Guillermo del Toro’s Pinocchio” is potentially poised to change that. With a nomination from the Art Directors Guild and a BAFTA nomination early this morning, the film is very much in the production design conversation, and it deserves to be a lock for an Oscar nomination which would make it the first animated film to ever be nominated in the category.

Animated films have been ignored in the Best Production Design Oscar race in years past due to some assumption that as a non-live-action film, their work isn’t awards-worthy. But when a film like “Avatar” or “Alice in Wonderland” can win the award, despite the majority of its onscreen locations being CGI, the idea that an animated film should not contend in the Best Production Design awards race alongside something CGI heavy like “Black Panther: Wakanda Forever” seems thin. The award is for production design. The design and creation of the environments we see onscreen in animated films are no less impressive than in live-action films.

More importantly, a production like “Guillermo del Toro’s Pinocchio” takes everything a step further. Not only have its environments been richly designed, but they’ve also been built from scratch. “Guillermo del Toro’s Pinocchio” as a production is no less impressive than the array of sets for “Babylon” for “Elvis.” Del Toro’s team painstakingly researched cathedrals, medieval ruins, murals, and more to recreate 1930s Italy. Watching behind-the-scenes footage of designers set decorators, and lighting crews preparing and lighting the sets on display in the film makes it clear that there is little distinction between the work on display here versus what live-action films are achieving.

Del Toro’s team knew that the Italy of this world relied on coal fire for heating. So his team stained every inch of the walls and floor with coal dust. The attention to detail is astonishing. For the church, the team factored in the fact that churches take decades to complete. Thus the coloration on the woodwork was aged to appear to have been created in a different era than the floor or the frescoes on the wall. There are hundreds of props in each scene, such as small tools for wood carving, circus materials, and books; each one had to be designed from the ground up. And, of course, the film has its fair share of entirely fantastical elements, like the cavernous inside of a fish. Honoring “Guillermo del Toro’s Pinocchio” in Best Production Design could also be a way to celebrate the costumes, which contain dozens of fabrics and clothing for each 9.5-inch puppet.

As Guillermo del Toro has been telling us for months, “animation is not a genre. It’s a medium,” and it’s time awards bodies started treating it as such. Del Toro always creates mesmerizing worlds, and the production design branch has noticed his work time and time again, honoring films like “Pan’s Labyrinth,” “The Shape of Water,” and “Nightmare Alley” in the category. The work here is equally impressive and deserves to be nominated this Tuesday and make history in the process.

Which awards contender still has a solid chance of earning an Oscar nomination? Please let us know in the comments section below or on our Twitter account and check out our latest Oscar nomination predictions here.