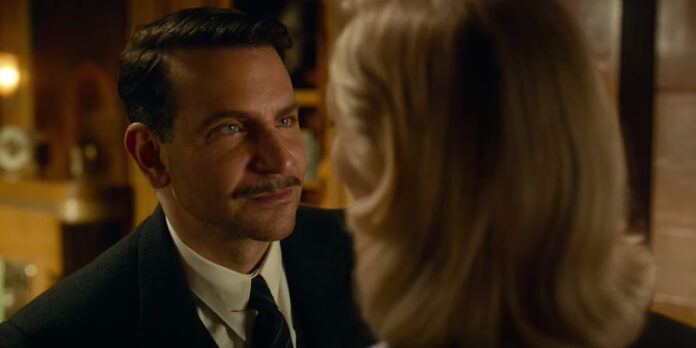 THE STORY – In 1940s New York, down-on-his-luck Stanton Carlisle endears himself to a clairvoyant and her mentalist husband at a traveling carnival. Using newly acquired knowledge, Carlisle crafts a golden ticket to success by swindling the elite and wealthy. Hoping for a big score, he soon hatches a scheme to con a dangerous tycoon with help from a mysterious psychiatrist who might be his most formidable opponent yet.

Many filmmakers are obsessed with the notion of plunging into the past and mining it for rich thematic material. Still, few have quite the unique fascination with this subject quite like Guillermo del Toro. There seems always to be some dark corner from history he fixates his eye on, whether it be Spain under the thumb of fascist rule during World War II or the insidious underbelly that lay beneath the glossy sheen of 1960s America. The genres may vary from gothic horror to rampaging action, but del Toro’s interest in looking backward often produces intriguing results. Now he tackles a property more than seven decades old, and “Nightmare Alley” produces a work that osculates between wildly engaging and frustratingly inert.

Much like the previous 1947 adaptation, this film starts with Stan Carlisle (Bradley Cooper), a mysterious drifter on the run from some unknown trauma in his past who manages to find his way into working for a traveling circus. He forms a comradery with most of the group and comes to learn the tricks of the trades. This includes the likes of the fortune teller Zeena (Toni Collette), her drunken partner Pete (David Strathairn), and the strongman Bruno (Ron Pearlman). He also develops a romantic relationship with Molly (Rooney Mara), another performer. However, Stan’s ambitions take him and Molly away to make their own mentalist act in the big city. While successful, Stan eventually gets drawn into the plot of sinister psychiatrist Lilith Ritter (Cate Blanchett) and her efforts to sink her hooks into wealthy clients. This sends all parties onto a sinister path where their choices will be frightfully consequential.

There is no denying the impeccable craft on display, a staple now with every del Toro endeavor. From the striking color palette of the cinematography, layered sound work, and dazzling production design, every frame is precisely detailed in both sides of this world. The dirty environments of the carnival capture a grime that is still somewhat alluring, while the clean lines of the high society world match the heightened emotional states. There’s hardly a moment where one is not enamored by the aesthetics that have been finely created. However, it is often a crutch for when the film’s pacing turns decidedly lethargic in long stretches and eventually reveals an emotionally hollow core. There is an appreciation for the liveliness that del Toro attempts to infuse into this subject matter, and he occasionally succeeds. Yet, the outcome is inconsistent, mostly falling into long stretches of languid momentum.

The screenplay from del Toro and Kim Morgan is another area where the film falters and arguably is the most damning element. The issues are particularly prevalent in the first hour, where the story meanders between an array of characters in the carnival group and amounts to minimal advancement with the motivations at hand. It’s the section of the narrative that aches to be condensed so that the audience can arrive at the glamourous cityscape. Even with the change of scenery, the script is still bound by the conceits of blunt storytelling and stilted dialogue, even though some sequences of back-and-forth exchanges are pretty invigorating. It all races to a catharsis that is earned but falls a bit flat against the more internalized work that was previously established. The foundations of the film are faulty within the writing, struggling to create a portrait that endears one to the plights at hand.

Cooper delivers a strong performance in the central role here, maintaining a layered and nuanced portrayal right up until the cracks of his steely exterior widen in the final moments. It’s a mostly reserved turn that serves as an effective core for the events of the plot to orbit around. Blanchett is by far the greatest asset, with her devilish charm that is near impossible to resist. Every moment that features her immediately fills the air with a dangerous excitement, embodying the classic femme fatale trope with the simmering intensity that Blanchett relishes in providing. She is the brightest highlight in a talented ensemble that is mostly reduced to serviceable roles. It’s particularly felt with Mara embodying a flat character, not helped by the lack of chemistry with Cooper and Richard Jenkins as a tardily introduced antagonist not given time to develop. This cast is exceedingly exceptional, which only makes the inadequacies of their deployment all the more disappointing.

“Nightmare Alley” does indeed contain certain aspects that are undeniable in their praise. The craftsmanship is remarkable on every level. Even some of the weaker points, such as Nathan Johnson’s mostly familiar score, fit with the overall haunting aesthetics that are quite inviting. There are fine performances to appreciate, especially with the pairing of Cooper and Blanchett. However, the emptiness of this story is pervasive, leading to a muddled pace and a sea of characters who get lost in the shuffle. Even this ensemble struggles to make much of an impact outside of those exceptions mentioned above. Unfortunately, the whole is far less than the sum of its parts and does mark a downturn in the already irregular filmography of Guillermo del Toro. Still, that also contributes to the attraction to his work. He will always imbue his perspective with an arresting uniqueness that calls for attention. Del Toro may still feel the need to look backward, but his skills will always demand anticipation for the future.