Why Did It Take “Amazing Grace” 47 Years To Reach Cinemas? 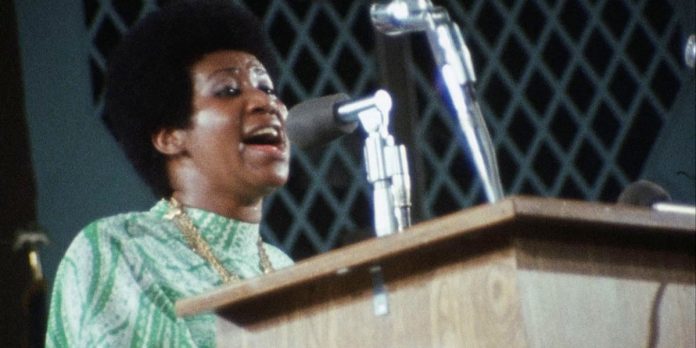 ​On paper, it felt like a marriage made in musical documentary heaven. Aretha Franklin, the Queen of Soul, was to record her first gospel album in an L.A. church, and the session would be captured on film by hot new director Sydney Pollack, who was coming off a Best Director Oscar nomination for “They Shoot Horses, Don’t They?” The film would be released by Warner Bros to coincide with the release of the “Amazing Grace” album. Corporate synergy at its best. Then something happened.

For Aretha, this was an important album. Music writers at the time observed that, with the huge commercial success that she achieved when she signed with Atlantic Records and produced hit after hit, many felt that Aretha had turned her back on the gospel community that helped to shape her. And she wanted, through this album, to rebuild any bridges that she may have burned with the gospel community along the way. It was no accident that the recording session was to take place at the New Temple Missionary Baptist Church in Watts. If you were familiar with L.A. culture at the time, you’d know that this church was at the center of African-American religious life in L.A. and setting the two-night session there would, in effect, give the project the church’s imprimatur. As a side note, New Temple Missionary Baptist used to be a movie theater (you can still see where the screen was in some shots), which bestowed a blessing of another sort on the filming.

“Amazing Grace” was never going to be conventional documentary shoot. It was a film that wasn’t going to be shot by a fixed camera in a recording studio or a concert hall. Instead, while still respecting the fact that it was set in a house of worship, Pollack’s camera crew prowled the aisles, providing unforgettable footage of parishioners rapturously moving to the beat of Aretha’s extraordinary performance. The camera also captures a rapt Mick Jagger mesmerized in a rear pew.

If the first night of recording was an astounding reminder of the power of Aretha’s voice in its prime (she was 29 at the time), the second night went even further. The vocal power was still there, but there was a reverence in her voice that revealed just how much these hymns meant to her, and her deep faith seemed to shine through every note. The filmmakers must have returned to the Warner Bros edit bays thinking that they had struck gold in the 20 hours of footage that was shot.

Then, disaster. It quickly became apparent that Pollack had somehow neglected to use a clapboard to begin every shot, and without that sound of the arm snapping down on the striped clapboard, the video and audio could not be synced together. Remember, this was all pre-digital, and there was no technology available at that time to make the sound and picture work together, despite the efforts of Pollack and his editors to make it work. Pollack then had to move on to pre-production on “The Way We Were,” and when the deadline to complete the film by the time of the album’s release came and went, the editors gave up on the project as well, and the film cans sat on a Warner Bros shelf gathering dust for decades.

Cut to 2007/2008. Pollack had been diagnosed with terminal prostate cancer, but he never appeared to want to let go of “Amazing Grace.” He contacted Alan Elliott, a music executive who had been obsessed with the never-finished film since the mid-1980s, and asked him to take over the project. Elliott went so far as to mortgage his house, and he successfully bought back the rights to the film from Warner Bros and went to work on syncing sound and picture. Thankfully, the technology available to Elliott in 2008 allowed him to sync the film perfectly, and by 2011, it was ready for its first public screening at the Telluride Film Festival.

I’ve read a number of reports from film writers about that fateful night — masses of film fans gathering to view the legendary lost film when word came down about 2 hours before the screening that Aretha Franklin had filed an injunction stopping all public showings of the film. Her argument was that the film showed her likeness without her permission, and she wanted to retain control of her own image. Legal wrangling over the film continued for the next few years, and even when it appeared that her compensation for the film had been settled, attempts to show it at Telluride in 2015 and 2016 were met with injunctions. It appeared that “Amazing Grace” would never be shown to the public.

Aretha Franklin died on August 16, 2018. As the world mourned, much to Elliott’s surprise, he was invited to the funeral by Aretha’s niece Sabrina Owens, who also happened to be the executor of the Franklin estate. Several weeks later, he reconnected with Owens who suggested that Elliott might want to show “Amazing Grace” to the family. On September 20, he did just that, and, much to Elliott’s relief, the Franklin family gave him their blessing to have the film seen by the public.

Soon, “Amazing Grace” will be playing at a theater near you. And when you settle into your theater seat, just remember the 47 years of struggle to get this film to your theater, then revel in the sound of a voice for the ages.

​Have you seen “Amazing Grace” yet? What do you think of the story behind the acclaimed documentary? Let us know your thoughts in the comments section below or on our Twitter account.