“THE MAN WHO KILLED DON QUIXOTE” 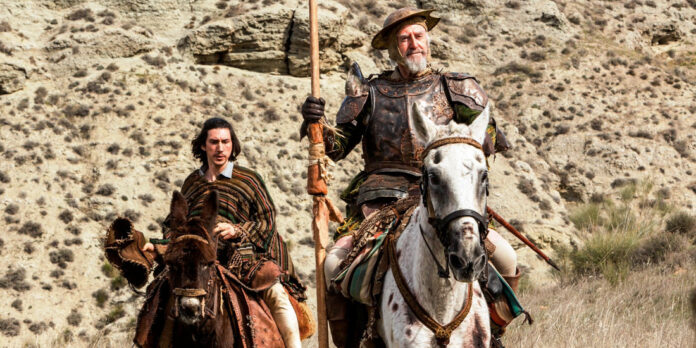 THE STORY – Toby, a disillusioned film director, becomes pulled into a world of time jumping fantasy when a Spanish cobbler believes him to be Sancho Panza. He gradually becomes unable to tell dreams from reality.

​​​​​​As the opening text of his latest film explains, creative visionary Terry Gilliam has been making and unmaking “The Man Who Killed Don Quixote” for over 25 years, and now it is finally here. Gilliam’s films are notably always a bit messy but always wonderous in their technical craft and artistry. That’s no different here as his epic telling of the legend that is Don Quixote, is certainly unique, weird and eye-popping on multiple levels, for some reasons which are deservedly earned and others which are maddeningly bizarre.

Toby (Adam Driver) is a delusional and creatively stifled film director who upon shooting a commercial in Spain revisits the set of his first film which launched his career: The Man Who Killed Don Quixote. There, he comes into contact with Javier (Jonathan Pryce) an even more delusional older man who was originally cast in the titular role in Toby’s film and now believes he really is Don Quixote. Thinking that Toby is his trusted sidekick Sancho Panza, the two travel across the country evading the authorities, discovering love and traveling down a road of madness where the lines between reality and fiction are blurred.

Terry Gilliam’s mad look at artistic obsession is bathed in sun-soaked colors and bombastic moments of hilarity and vision from an artist who has always been able to deliver cinematic distinction through his own unique lens. However, despite the costumes, makeup, cinematography, score and art direction, its the screenplay that suffers the most. “The Man Who Killed Don Quixote” gives us an unlikable lead character in Toby, who is given life and hilarity by Adam Driver but cannot seem to overcome Gilliam’s lack of empathy for the character. He is self-centered and a whiney brat version of the tortured and obsessed artist, which we have seen done to death at this point. Gilliam further complicates matters in making each one of the character’s relationships very one-sided, as Toby only cares about his own self-preservation. By the time we get to the end and he has started caring for the other characters he encounters on his whacky journey, the film’s inconsistent tone, sluggish pacing, and immature writing holds us back from fully grasping the enormity of the transformation that Toby has undergone. Driver is fantastic though, even if it feels like almost every line of dialogue from his mouth contains an unnecessary f-bomb. His slapstick humor, comedic timing, and facial reactions are absolutely priceless and go a long way in providing a bulk of the film’s entertainment value.

Jonathan Pryce is in full fledge bonkers mode here, as an old man who severely needs help, putting him and others at risk because of his delusions of grandeur in thinking that he is the actual Don Quixote. His commitment to the role eventual won me over despite a wobbly accent from the Welsh actor. Newcomer Joana Ribeiro is undeniably beautiful on-screen but is undercut by repeated offenses of misogyny to the character in the screenplay. She lacks any agency and a scene where she has to lick cream off of another character’s shoe felt gratuitous and even more offensive considering she wasn’t even built up to properly be a strong female character to begin with. Jordi Mollà, Stellan Skarsgård, and Olga Kurylenko round out the cast in roles that are also unlikable and get progressively weirder and weirder as the film moves on.

Overall, I’m glad that Terry Gilliam’s passion project over the last 25 years has finally made its way to the big screen. It’s definitely not perfect but there’s something admirable about the fact that despite everything, he still got his vision on screen. This is undeniably a Terry Gilliam film and some will love that and others will hate it. Will it live on forever as the film’s main character has continued to do so throughout history? Maybe not as much as “Brazil,” “The Fisher King,” “12 Monkeys” and other classics the director has given us before but its very existence is something to behold, faults and all.