“VENOM: LET THERE BE CARNAGE” 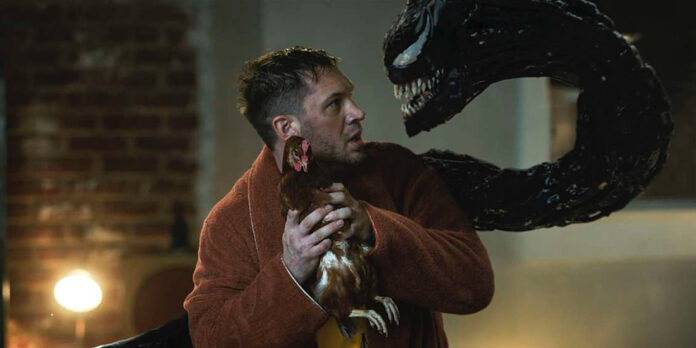 THE STORY – After finding a host body in investigative reporter Eddie Brock, the alien symbiote must face a new enemy, Carnage, the alter ego of serial killer Cletus Kasady.

​​​Despite being one of the most unique superheroe films to grace the big screen, 2018’s “Venom” was primarily a bland and forgettable affair. With a dark, muddy visual style, messy storytelling, and slight humor, the origin story of Eddie Brock’s partnership with Venom didn’t entirely work. Three years later, director Andy Serkis has taken the reins for a sequel. Though Serkis brings more personality to the Brock/Venom dynamic, “Venom: Let There Be Carnage” is just as uneven as the first film and perhaps more annoying this time around than bland.

One year after becoming the host to the alien symbiote known as Venom, life looks very different for Eddie Brock (Tom Hardy). He lost his career and fiance (Michelle Williams) and is now stuck with a fast-talking, needy alien that he can’t escape. Venom regularly destroys Brock’s apartment, leaving it a muck of smashed walls, chocolate stains, and bloody chicken parts. The two constantly bicker about everything, especially as Venom tries to give Brock advice about his life and career. Kelly Marcel’s screenplay furthers the “Odd Couple” dynamic, which was presented in the origin story and pushes it to new levels of screwball comedy. Brock is the clean one with more going for him, and Venom is, well, the one who’s just desperate to eat some brains. There are plenty of attempts at humor within this bizarre relationship, but unfortunately, most of the jokes fall flat. It’s an understandably difficult thing to execute, given that half of this pair is a fully CGI creation, but there’s little chemistry between Brock and Venom. While more fleshed out than in the first film, this relationship feels more forced than ever in a desperate attempt to win over those who weren’t fans of the first film.

While trying to restore his formerly successful career as a journalist, Brock connects with death-row inmate Cletus Kasady (Woody Harrelson), a notorious, psychopathic killer. Brock and Venom (but primarily Venom) help to uncover the location where Kasady dumped the bodies of his victims, ensuring he would never see the light of day ever again. One thing leads to another, and Brock unintentionally spreads a piece of the symbiote to Kasady shortly before his execution is scheduled. This botched execution leads to the creation of a new, dangerous symbiote named Carnage.

Harrelson is reliably good in this sadistically villainous role, clearly trying to recapture his “Natural Born Killers” nastiness while also trying to have his Hannibal Lecter moment. It’s an acceptable performance that’s consistently let down by sloppy writing and even worse action setpieces. The thing about Carnage is that, as his name would suggest, he’s a harbinger of destruction. In pursuit of his mission, he slaughters everything in sight. Cletus and Carnage free his long-lost love, the equally evil Frances Barrison, also known as Shriek (Naomie Harris), who can basically scream really loud and bring about her own level of chaos. They’re an off-putting pair that fails to click romantically even more than what’s presented between Eddie and Venom. Instead of focusing on Carnage’s destructive power and Shriek’s obnoxious scream, perhaps more time could’ve been spent on developing their romance and characters? It doesn’t help that the sound design for Shriek is grating and unpleasant with a performance from Harris that is just as bad.

It’s clear that Serkis was drawn more towards the Eddie/Venom relationship than any of the large-scale superhero action, and it shows. The fight sequences are mediocre at best. The inherent design of the symbiotes makes all of the action feel too confusing as Venom and Carnage square off in a church towards the climax of the film with unclear cinematography and a degree of laziness in the storytelling rendering it merely forgettable.

Harrelson’s natural charisma and the continued exploration of the Eddie/Venom relationship help make this sequel stand out more than the first film, though it’s not a significant improvement. Save for a post-credits sequence that drew more of a reaction than anything else in the movie; this franchise has been unexciting, with an untidy visual style, forced humor, and bland action. Just like 2018’s “Venom,” this sequel is often weighed down by franchise-building instead of standing tall on its own two feet. Thankfully, the film is only 97 minutes long instead of the two and a half hours most superhero films are clocking in at nowadays. Ultimately, the character of Venom has not translated well to the big screen so far, even with Tom Hardy’s committed go-for-broke performance. When they said “Let There Be Carnage,” I’m not sure what they meant was the movie itself.