Trailer – “Everything Everywhere All At Once” 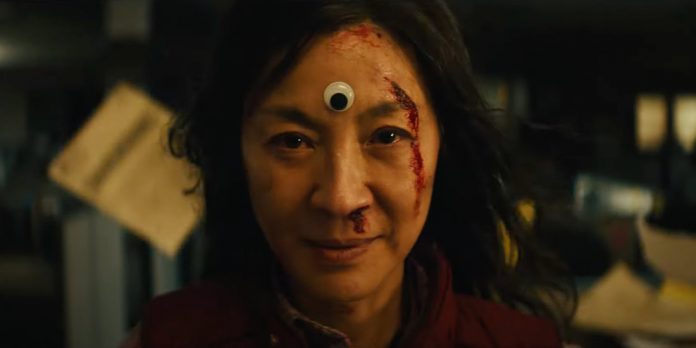 By Matt Neglia
​
A24 has released the trailer for “Everything Everywhere All At Once,” starring Michelle Yeoh, Ke Huy Quan, Stephanie Hsu, Jenny Slate, Harry Shum Jr., with James Hong and Jamie Lee Curtis. The film is set to premiere at this year’s SXSW Film Festival and will be released in theaters on March 25th 2022.
​
​Click below to see the trailer.

Plot Synopsis: Directed by Daniel Kwan and Daniel Scheinert, collectively known as Daniels, the film is a hilarious and big-hearted sci-fi action adventure about an exhausted Chinese American woman (Michelle Yeoh) who can’t seem to finish her taxes.

What do you all think of the trailer? I was a massive fan of the Daniels’ feature directorial debut film “Swiss Army Man” but was left a bit underwhelmed by their follow-up “The Death Of Dick Long.” I will never say no to a film led by the incredible Michelle Yeoh, and it looks like the brothers have brought their trademark style to a quirky, daring, and audacious story involving the concept of the multiverse and all of its expansive possibilities. Overall, this looks like a ton of fun in terms of its kinetic style and execution, although who knows how convoluted the premise might become. What do you all think, though? Let us know your thoughts in the comments section below or on our Twitter account.