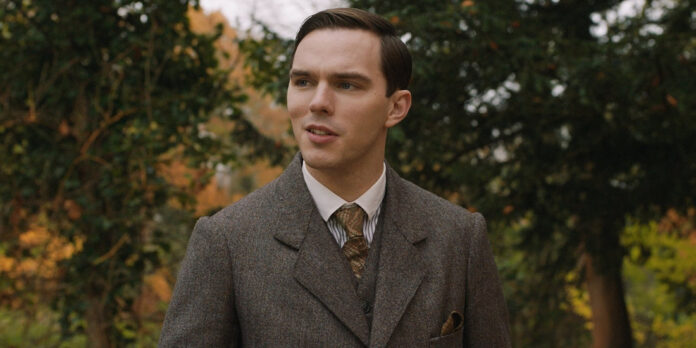 THE STORY – TOLKIEN explores the formative years of the renowned author’s life as he finds friendship, courage and inspiration among a fellow group of writers and artists at school. Their brotherhood strengthens as they grow up and weather love and loss together, including Tolkien’s tumultuous courtship of his beloved Edith Bratt, until the outbreak of the First World War which threatens to tear their fellowship apart. All of these experiences would later inspire Tolkien to write his famous Middle-earth novels.​

​​​​​​”The Lord of the Rings” Trilogy by Peter Jackson is my favorite movie of all time. “The Hobbit” Trilogy, not so much. However, that original trilogy was enough for me to pick up Professor J.R.R. Tolkien’s books and become familiar with his writing style and use of language, something very integral to the biopic about the man’s life titled “Tolkien.” The film attempts to tell the story of one man’s life and how his own experiences influenced the story that would go on to inspire and capture the imagination of a generation. However, due to its “paint by numbers” direction and writing, “Tolkien” is never able to rise above the other countless author biopics we have seen in recent years.

World-renowned author John Ronald Reuel Tolkien’s (Nicholas Hoult) life is told in a series of flashbacks, from his time serving in World War I during trench warfare in France, to his childhood with his mother and younger brother, to his time with his best friends as they formed a secret boys club and went on to school at Oxford, to his growing romance with Edith Bratt (Lily Collins), a financially poor but artistic presence in John’s life despite outside and internal forces that threaten to keep them apart.

“Tolkien” attempts to bite off more than it can chew by trying to tell a horrific war movie (there are bodies on top of bodies, explosions, gunfire, mud, and blood all over the place during these sequences), a coming of age story and a star crossed lovers romance between two people who we really don’t get a chance to buy into their relationship, mainly because the presentation by director Dome Karukoski is so glossy and formulaic. There is no sense of immersion into the characters, their hopes, and stories. “Goodbye Christopher Robin” told familiar story beats fairly recently and to great effect. Here, it feels like scenes are only included (or excluded) not because the filmmakers want to accurately tell a story about J.R.R. Tolkien’s life but they want to tell the version that will best act as comfort food for a moviegoing audience.

There is a genuine sense of camaraderie that is built between John and his friends within what they call the TCBS (Tea Club and Barrovian Society), where they inspire one another to change the world through their art. Their bond carries them through tough times at school, at home and beyond into the horrors of war. It’s here and in the film’s depiction and exploration of language, John’s fascination with it and what it means to him (“Words without meaning are just a sound”) that the film starts to find its groove a bit. However, for every heartened moment of artistic expression, there is an eye-rolling moment of withdrawal such as when John and Edith kiss and the camera pulls back on them down a long hallway for what feels like forever for no rhyme or reason other than emotional manipulation.

Thomas Newman’s score is, as per usual from the 14-time Academy Award nominee, beautiful and fitting for the story that the filmmakers want to tell here. However, it gets bogged down by the familiar patterns and compositions that we’ve come to expect from the composer. The cinematography does strive to achieve some striking imagery during the war scenes as we see evil horseriders, dragons, the face of the Balrog in an explosion and more. All of which would go on to influence Tolkien’s writing but these moments, like many other aspects of this film, distract rather than enhance the viewing experience. None of the actors give stellar performances that will be remembered as their best. Nicholas Hoult continues to prove that he’s much more interesting as a supporting character actor than as a leading man (See his work on “The Favourite” and “Mad Max: Fury Road“).

“Helheimr” is a phrase spoken by the TCBS group, which for them means never giving up, living in the moment and seizing the day. How very “Dead Poets Society” of them. It’s the thread which weaves its way all throughout the film’s narrative as Tolkien never gives up on his relationship with Edith, going through hell to find his way back to her. But why should we care? Not because the filmmakers have earned it. It’s just a shame that the overall production of “Tolkien” couldn’t reach higher, tell a more distinct story and instead of settling for conventional storytelling, something their subject was clearly not interested in doing.