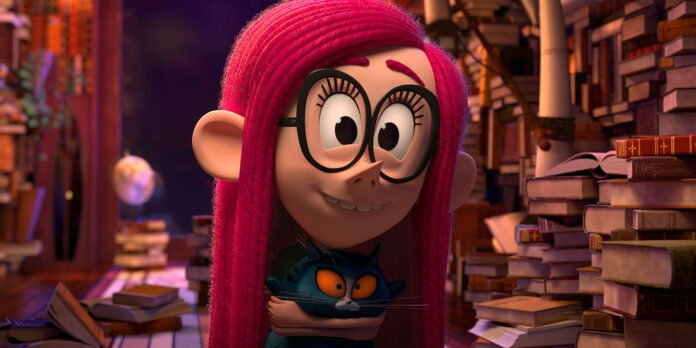 THE STORY – Neglected by their parents, four old-fashioned siblings venture out into the modern world with their new nanny.

4/21/2020
​By Sara Clements
​
​Ricky Gervais, as The Cat, narrates “The Willoughbys” and opens with a warning: “If you love stories about families that stick together and love each other through thick and thin and it all ends happily ever after…this isn’t the film for you, okay?” A quote that could have come straight from Lemony Snicket’s “A Series of Unfortunate Events”. Netflix’s latest animated film is based on Lois Lowry’s 2008 children’s novel of the same name. Her novel is a parody of such classics like “Heidi,” “The Adventures of Huckleberry Finn” and “James and the Giant Peach” but has also been compared to Snicket since its publication. While the images in Lowry’s novel are in black and white, director Kris Pearn, along with writer Mark Stanleigh, refuse to settle for a dreary orphan tale. No, it’s a sugar-coated explosion of a Skittle filled rainbow.

Coming off a successful year with two impressive works, “Klaus” and “I Lost My Body,” Netflix is proving once again that it’s a force in the animation game with their new offbeat and charming family tale. In the middle of a busy metropolis lies a colorful Victorian home stuck in between two skyscrapers, “Stuart Little”-like. Hidden behind a sprawling garden, this is a relic that houses an old-fashioned family. With all of its nooks, crannies, books, and portraits, the production design by Kyle McQueen is something to behold. The Willoughby home looks like something of fantasy as much as the concept of family does to the children who reside in it. Tim (Will Forte) – the eldest and always wearing a WWI helmet – sees himself as the man of the house, aspiring to bring back the lost traditions and values that the Willoughby family once held, before their parents came along. His sister Jane (singer Alessia Cara lending her voice to the role as well as singing the charming theme) is the dreamer, the hopeful one who wishes that someday they will feel like a real family. And lastly, there’s the Willoughby twins, a strange twosome who share a sweater as well as a name, Barnaby (Seán Cullen). These are siblings who have only ever had each other as they were neglected by their parents their whole lives. Their mother and father are a selfish couple so into themselves that they should never have had children. But they did, and they see every one of their children as a disruption, an inconvenience to their “perfect” life. Martin Short and Jane Krakowski play these two with the eccentricity of a forgotten theatre or movie star, a Norma Desmond type, but with the dramatics of a character in a murder mystery film. This is an imperfect family under the most colorful façade.

The Willoughby story kicks off when the children find a baby, anonymously and mysteriously delivered to their doorstep. They name her Ruth (surprisingly voiced by Brian Drummond), but where she came from and why she was sent to them are never explained, but perhaps it’s just an example of fate as, once Jane demands they follow a rainbow hoping it will lead to the perfect home for Ruth, the Willoughby children find the courage to make the perfect home for themselves too. The rainbow leads to Commander Melanoff (Terry Crews)’s candy factory and the Willoughbys drop her off hoping it will be the perfect home for her, and it proves to be. On their way back home, they pass by a travel agency and this is when their plan is hatched: they’ll send their parents on a dangerous and deadly vacation that there’s no coming back from. It works, and their parents are off, but their dream of living in the Willoughby house alone is spoiled by the arrival of an umbrella-wielding Nanny (Maya Rudolph) hired by their parents (although she didn’t float down from the sky like Mary Poppins). Despite the children’s strange behavior, Nanny is incredibly caring and loving towards them, something they’re not used to with Tim becoming increasingly suspicious. The Willoughbys soon realize, however, that orphaning themselves has become much more than they bargained for, and with the help of Nanny, Commander Melanoff, and baby Ruth, they go off to rescue their parents, while experiencing true parental love for the first time in the process.

Personally speaking, “The Willoughbys” has some of the most hilarious scenarios seen in an animated film in a long time. When Ruth first arrives at the Willoughby home, she zooms around, unable to be controlled, causing so much mayhem it’s impossible to not find amusement in her antics. A lot of the comedy also comes thanks to Rudolph who, as Nanny, gets some humorous reactions out of the children who don’t know how to react to such a kind parental figure. Another element that makes the film so delightful is its animation. Both “Klaus” and “I Lost My Body” are singular in their styles, and Netflix continues that trend. “The Willoughbys” feels unique because, while it is digital, it feels like stop-motion; the texture of the characters and their design by Craig Kellman look like claymation. This touch adds to the old-fashioned lifestyle, values, and traditions that built the Willoughbys. What hits the film home, though, is the fact that the parents never have a redemption arc. They stay horrible right up until the very end creating a conclusion that’s much more impactful than it would have been otherwise.

“The Willoughbys” is funny, heartfelt and full of “Home Alone” mischief. And while it doesn’t feel like an entirely original piece because of all its influences, and is quite cliché, its message that a home isn’t something built of four walls is a reminder that never gets tiresome.