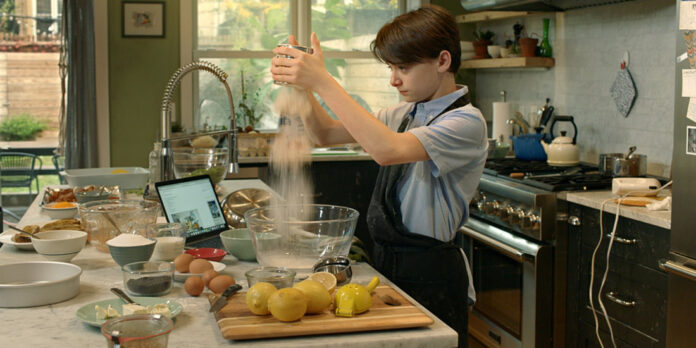 THE STORY – Abe is a 12-year-old boy from Brooklyn who cooks to unite his half Israeli and half Palestinian family, but everything goes wrong.

​​​​​​​​Abe (Noah Schnapp) would prefer you to call him by his nickname. His name is Abraham, but his mother’s Jewish family calls him Avraham and his father’s Palestinian family calls him Ibrahim. The two families don’t exactly get along, and poor Abe is caught in the middle. This feeds his passion for cooking, especially fusion food. He has an Instagram account for all his cooking projects, with a good amount of followers and support and one school bully who is constantly unimpressed. Given a choice of a summer activity, he chooses a youth cooking program but is disheartened when he discovers that he’s the oldest registrant and that they won’t be using knives. So he seeks out Afro-Brazilian chef Chico (Seu Jorge), who runs a successful fusion food cart, and endears himself just enough to get the chef to agree to mentor him.

Abe, like the film that bears his name, is so adorable that it’s difficult for anyone to say no to him. However, also like the film that bears his name, he has a lot on his plate. “Abe” is as much about the unifying power of food as it is about Israeli-Palestinian relations, adolescence, interracial marriage, faith, growing up in the 21st century, and the power of an adorable child to soften even the hardest heart. But at a sprightly 85 minutes, the film doesn’t give itself enough time to give all of these themes enough room to breathe. They’re all crowded around the dinner table, grabbing for as much of our attention as possible.

The film’s saving grace is its lead performer. Noah Schnapp brings that same open-hearted honesty he displays as Will Byers in “Stranger Things” to his performance here, and it’s impossible not to fall for Abe and want to see him succeed. Schnapp has to carry the whole film on his shoulders and he proves more than up for the task – his eyes a direct line to everything that Abe is thinking and feeling. As his parents, Dagmara Dominczyk and Arian Moayed bring a sense of world-weariness that reflects the difficulty of this particular kind of interracial/interfaith marriage, mixed with a genuine love for each other and their son. Their performances are the subtle, quiet heart of the film.

The film’s divided focus on Abe’s home life, trying to navigate his heritage, and his life in the kitchen learning from Chico, prove to be its undoing, though. Neither story gets enough screen time to have the weight needed to bring home the film’s major themes. The film’s often hyperactive editing doesn’t help matters, either, making the already slim runtime move by even faster. The multiple sequences of social media posts and comments could easily have been cut to give more time to developing Chico’s character so that his arc of opening up to Abe makes more sense and has more impact. That time could also have been used to further explore Abe’s parents and how they’ve dealt with their family’s animosity towards each other, or to turn Abe’s school bully into an actual character instead of just a few mean internet comments. Or… or… or… the possibilities are endless.

“Abe” follows a time-tested recipe for its coming-of-age story, so we know fairly early on where all this is going. The film adds a lot of different elements in an attempt to spice it up, but it doesn’t give those elements enough time to marinate so that the audience can appreciate their full flavor. It’s unfortunate because the film is charming and Noah Schnapp is delightful. There were lots of opportunities to make something interesting and fresh here, but instead, it comes off as hastily put together and somewhat stale. It’s an enjoyable watch, but it’s missing that one ingredient that could take it to the next level.