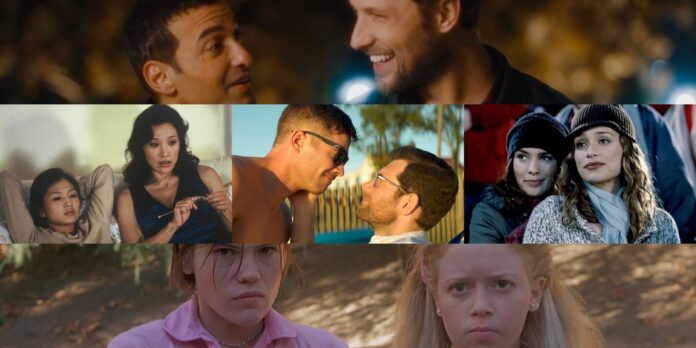 When it comes to queer representation in cinema, those of us in the community have often found that we can’t be too picky with what we’ve got. For the past half-century or so, LGBTQ+-centered films have mostly either been grandly accomplished but highly dramatic (“Philadelphia,” “Brokeback Mountain,” “Moonlight,” etc.) or, frankly, bad. For instance, those of us who came of age and came out in the 2000s can speak to the dire state of queer-themed comedies at the time. But frequently, these lackluster films are still watched due to a lack of options and a curious sense of obligation. One genre that has been notably lacking in queer representation is the romantic comedy. It’s unfortunate that visibility in film for the LGBTQ+ community has increased while fewer rom-coms are being made. Thankfully, the studio release of the new film “Bros” hopes to fill that very gap. But it’s not the first queer rom-com, as this list of sweet, funny, and heartbreaking films shows.

One of the great joys of delving into queer cinema is finding films that explore how individuals with many compounding layers of identity – whether ethnic, religious or otherwise – may have a specific and unique experience with their sexuality. “Breaking Fast” does just that. Its main character Mo (an adorably endearing Haaz Sleiman), is a gay Muslim doctor who begins to make a new connection with a man named Kal (Michael Cassidy), all under the backdrop of the daily fasts of Ramadan. In many ways, this is a classic romantic comedy between two people of different backgrounds – they just happen to both be gay men. Even outside of the queer representation, this film is notable because American cinema doesn’t produce many movies that showcase the joys of Islam. The way it portrays a specifically queer Muslim character makes “Breaking Fast” the kind of rare and charming gem of a film that deserves to be discovered and celebrated.

An essential piece of Gen X and Millennial lesbian cinema, this fabulist film follows teenage Megan (Natasha Lyonne) as she’s unwillingly sent to a conversion camp by her stodgy parents. The twist is Megan doesn’t even know that she’s a lesbian – her friends and family merely suspect it based on her interests and behavior. Of course, the conversion camp has the opposite intended effect, leading to Megan discovering the truth about herself and even finding young love in fellow would-be-ex-homosexual Graham (Clea DuVall). The entire film has a campy, dynamically colorful quality as if John Waters had designed a Barbie Dreamhouse. The tone is absurd, which serves to show just how ridiculous homophobic practices and people are. But the unlikely romance that’s as much of a surprise to the characters themselves as it is to the audience is ultimately the film’s greatest achievement, leading to an ending that’s both triumphant and sweet.

https://www.youtube.com/watch?v=VDAqYCOsITcQueer people deserve a cheesy “Lifetime” Christmas, too! 2020 was a year that saw the release of a good number of holiday films that feature non-heterosexual characters and couples, and “The Christmas Setup” is easily the best of the bunch. “Lifetime’s” first-ever LGBTQ+-themed holiday movie smartly casts real-life spouses Blake Lee and Ben Lewis as the central will-they-won’t-they couple. Their chemistry is obviously fantastic, making the audience root for them even harder. But the most notable member of the cast is the legendary Fran Drescher as the mother of Lewis’s character. She’s warm, funny, and actively rooting for her son to get together with his inevitable boyfriend. It’s a cozy, charming movie that wisely keeps any dire tension at bay as if the characters exist inside a trouble-free snow globe. It’s predictable, corny, and sweet, just as every holiday season should be.

Yes, this came out (no pun intended) mere months ago, but it’s already destined to be a classic that will be rediscovered and revisited every summer. “Fire Island” takes inspiration from the mother of all romantic comedy texts: Jane Austen’s “Pride and Prejudice.” In doing so, it proves just how timeless and malleable that story is by effortlessly transferring character traits and romantic entanglements from Austen’s original nineteenth-century personas to a modern-day group of LGBTQ+ friends. It’s hilarious, with witty dialogue and classically queer pop culture references. Plus, it’s a moving, affirming look at modern relationship troubles and anxieties that many queer folks find themselves facing. The talented ensemble of irrepressible comic voices perfectly guides the film through its shifting tones, ensuring that the audience feels no whiplash as the movie goes from zany to raucous to sexy to devastating and back again. Best of all, the Elizabeth-Darcy dynamic is just as frustrating and ultimately romantic when portrayed by two gay men; in this case, Elizabeth becomes Noah (Joel Kim Booster), and the misanthropic Darcy is now Will (Conrad Ricamora). Sometimes, taking inspiration from the classics is the best way to tell a fresh, new story.

The closest film on this list to a typical studio rom-com, “Imagine Me & You,” is very pleasantly formulaic. It’s a classic tale of meeting the right person at the wrong time, but with a gay twist. The film opens with the wedding of Rachel (Piper Perabo) and Heck (Matthew Goode). Luce (Lena Headey) oversees their flowers, and she and Rachel hit it off immediately. It’s quickly revealed that Luce is happily out of the closet, and as their friendship develops, Rachel begins to have questions about her own sexuality. The movie checks off so many perennial rom-com boxes and is low on truly grim conflict, which makes it a perfectly comforting watch. Straight people have had low-impact, delightfully standard romantic comedies for nearly a century; why can’t the queers?

The Incredibly True Adventure Of Two Girls In Love (1995)

The ’90s were a fantastic time for teen romantic comedies, like “Clueless” and “10 Things I Hate About You.” The stupendously titled “The Incredibly True Adventure of Two Girls in Love” fits neatly into this era of rom-coms, except it just so happens to be about two girls. Still, they go through all the typical difficulties and joys that any onscreen teenage couple experiences, including differing tastes and interests, judgmental friends, and the thrill of a first kiss. Of course, their courtship has the dark cloud of ’90s homophobia always hovering above it, but the film approaches it from a very pragmatic point of view. The young couple (played by a wonderfully paired Laurel Holloman and Nicole Ari Parker) are aware of the hate they may encounter the more public they make their relationship. Still, it doesn’t poison every interaction and dominates every conversation. This truthfully reflects how many queer couples make their way through a world that is often set up against them, even today.

This charming and surprisingly whimsical film covers a very specific period concerning the AIDS crisis: the mid-1990s. Meaning it takes place after the public policy disaster period that was the ’80s but before the present-day era of PrEP and U=U. The idea of making a comedy about a gay man afraid of catching HIV from his potential lover may seem unsavory or inappropriate, but “Jeffrey” mostly avoids any moments of troubling perspective by centering around a very flawed individual. The titular role (played by Steven Weber) is ignorant and judgmental while still somehow charming. The film is bursting at the seams with a queer-appealing ensemble of actors, including appearances by Sigourney Weaver, Christine Baranski, Kathy Najimy, Camryn Manheim, Victor Garber, and Nathan Lane, among many others. Steve (Michael T. Weiss), the object of Jeffrey’s hesitant affection, makes for an adorable potential lover, and even with all of Jeffrey’s flaws, it’s hard not to root for them in this funny and moving time capsule.

A perfect example of 2000s indie excellence, “Saving Face” is a femme-centric story about finding love, no matter how uneasy the circumstances. It tells the tale of a young surgeon named Wil (Michelle Krusiec), who seems to be living the kind of successful professional life that every parent would dream of. But that’s still not enough for her mother, Gao (Joan Chen), who constantly attempts to set her up with a man. Unbeknownst to Gao, Wil is a semi-closeted lesbian who merely entertains her mother’s whims rather than taking them seriously. In fact, she has her eyes on a beautiful dancer named Vivian (Lynn Chen). The film draws inspiration from director Alice Wu’s difficulties as a first-generation American coming out to her Taiwanese immigrant mother. It’s the kind of film that depicts a particular cultural experience, namely that of Chinese Americans, and does so with such specificity that it paradoxically becomes a broadly relatable story. Anyone who has struggled with parental expectations, particularly regarding their sexuality, will be able to empathize. Most impressively, the film manages to derive both humor and emotional drama from the generational and cultural differences between Wil and her elders.

Have you seen any of these films? If so, which is your favorite? Are you seeing “Bros” this weekend? Please let us know your thoughts in the comments section below or on our Twitter account.