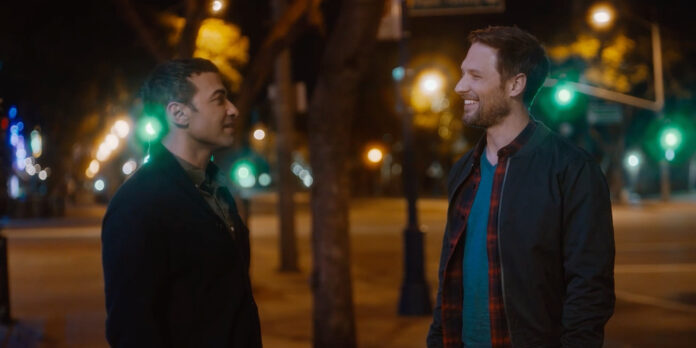 THE STORY – A devout Muslim living in West Hollywood makes an unexpected connection with an actor during the holy month of Ramadan.

One of the great privileges of storytelling can be the opportunity to see unique perspectives that one normally would not be accustomed to viewing. Within specific cultures, many different experiences are worthy of exploration in cinema. Some of these viewpoints coincide within the LGBTQ+ experience, resulting in a fascinating journey that sees how very particular points of view impact such stories. These stories are not always meant to answer every question, but any attempt to break up the landscapes’ homogeneity is much appreciated. That is precisely what “Breaking Fast” aims to do as it looks to portray an endearing love story cast under an underseen cultural context.

At the center of this story is Mo (Haaz Sleiman), a devout Muslim who sees himself as controlled and disciplined. He is currently still reeling from a breakup when his lover chose to marry a woman rather than come out to his family. A year later, he meets Kal (Michael Cassidy), an easy-going white man whom Mo starts inviting over to “break fast,” which is to enjoy the first meal after sundown during the holy month of Ramadan. The two start off as modest friends, but the bond between them grows more intense with each passing evening. Eventually, their situation leads to the challenge of each other’s worldview and preconceived notions about their lives. The romance that slowly emerges between them also reveals hidden truths that they must confront.

Writer-director Mike Mosallam intends to cast a somewhat familiar tale of a burgeoning love affair engulfed within specific societal frameworks. There is a celebration of this culture and, more specifically, the tenants of this religion without assigning judgment. There is an equal emphasis on both the importance and imperfections that seeking a romantic relationship of this sort can endure. While it may mostly speak to those ideas on the surface, the discussion itself is valued. It’s particularly felt in the political conversations that come across as slightly awkward but give the stage some authentic emotional revelations. The story here trades on many conventions that the broader genre has seen before, but giving light to how these relationships are treated with a specific foundation is a treasure to watch.

Unfortunately, that nuanced commentary isn’t particularly borne out in the filmmaking. Mosallam’s direction is mostly mediocre when it isn’t indulging in oppressive close-ups or distracting shaky-cam. His efforts feel mostly unassuming, apart from the appealing visual display of the gorgeous food. Still, he doesn’t do much to elevate the style into something innovative. Conversely, while one can find much gratitude in the thematic weight that is being mined, the execution is often clunky and littered with stiff dialogue. This is a clear case with the story’s objectives being of much greater significance than their presentation. As such, much of the film has a serviceable quality that does a decent job of showcasing ideas than it does at presenting a truly engaging portrait.

Sleiman gives a mostly grounded portrayal that is fair but ultimately, a tad bland. While he finds some emotional moments to play and is never outright terrible, his presence never comes across as extraordinary. Fortunately, he does share some nice chemistry with Cassidy, who is full of warm charm that makes him quite a magnetic personality. However, as affecting as the two are, nearly the entire film is stolen by Amin El Gamal playing Mo’s flamboyant best friend. Gamal is a whirlwind of energy and comedic timing that is a delight to witness. He also carries his own cathartic reveals that are just as moving as the plight of the protagonists. The performance he delivers is entirely charismatic and manages to convey nuance within a character that could have quite easily been played broad and flat.

There is enough in “Breaking Fast” that leaves one acknowledging its good intentions. The space to tell LGBTQ+ stories can sometimes be limiting in the mainstream and it’s nice that Sleiman’s effort to focus on a distinct viewpoint was presented. These intriguing perspectives are what make up for the bland filmmaking and mundane performances, with a few notable exceptions in the supporting cast. This film is not something that should be defined as wholly innovative when it comes to its execution. Still, the value of a different cultural lens will always be a treasured element to the diverse landscape of this particular arena of cinema.