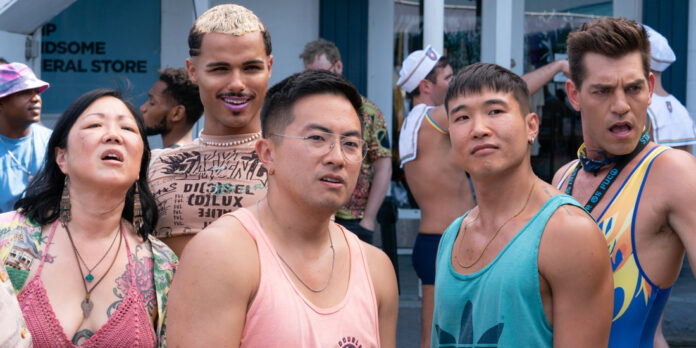 THE STORY – A group of queer best friends gather in the Fire Island Pines for their annual week of love and laughter, but when a sudden change of events jeopardizes their summer in gay paradise, their bonds as a chosen family are pushed to the limit.
​
THE CAST – Joel Kim Booster, Bowen Yang, Conrad Ricamora & Margaret Cho

​​​Expectations can be tricky. Just ask Noah (Joel Kim Booster). He had certain expectations for his annual week on Fire Island with his chosen family: Howie (Bowen Yang), Luke (Matt Rogers), Keegan (Tomas Matos), and Max (Torian Miller). But when they arrive, they learn that Erin (Margaret Cho) has to sell the house that has made this getaway possible, meaning that this will be their last trip. And then his non-waterproof phone ends up in the pool. So Noah has to adjust his expectations a bit, deciding to be hopeless romantic Howie’s wingman and putting his own sexual exploits on the back burner.

Similarly, anyone watching Andrew Ahn’s “Fire Island” might want to adjust their own expectations. This is not quite the raunchy gay rom-com that the title, plot, and trailer would lead you to believe it is. While it has many of the same beats as friend-group-trip-oriented comedies like “Girls Trip” or “The Hangover,” “Fire Island” has more in common stylistically and tonally with Ahn’s previous features “Driveways” and “Spa Night.” Emphasizing the more contemplative aspects of Joel Kim Booster’s screenplay, Ahn keeps everything moving forward on an even keel, never letting anything get too over the top. While this gives the film the laidback atmosphere of a nice beach getaway, it also flattens much of the comedy, rendering many guffaw-worthy lines merely chuckle-worthy. The movie is still plenty funny, but it is not funny on the outsized scale of most Hollywood comedies. This is a quieter, more intimate kind of funny – an old inside joke shared between friends.

Instead of the jokes, Ahn places most of the emphasis on the character arcs, which leaves a lot of work for the cast to do. Thankfully, they all rise to the challenge. Not that most of the characters are particularly deep, but every cast member gets their assigned stereotype and runs with it, making sure to find the individuality within. Matos is the stand-out, stealing the scene nearly every time he’s onscreen by adding just enough personality to the time-tested zingers of the script to make them seem fresh. Yang is adorable, even when Howie indulges in his more self-loathing side. He also has excellent chemistry with Kim Booster, the chemistry of platonic soulmates who never broach the subject of being a couple – and not just because Noah doesn’t believe in “the monogamy industrial complex.” The two are able to distill years’ worth of history into a single look, effortlessly selling their deep friendship. As Noah’s foil Will, the straight-laced best friend of Howie’s romantic interest, Conrad Ricamora, is wonderfully wound-up and does a lovely job of peeling back a new layer to Will’s character with each scene. Watching the relationship between Will and Noah evolve is one of the best things about “Fire Island,” which knows its way around clichéd rom-com beats well enough to make them effective and even a little surprising.

And that’s the best way to describe “Fire Island” on the whole: a little surprising. The low-key energy sometimes works against the antics of the characters, which can be a mixed bag. While this allows us to become more connected to the characters, it also makes the film feel more pleasant than especially fun or exciting, which can make it feel like something of a disappointment, especially coming from two comics as fresh and expressive as Kim Booster and Yang. But on the other hand, while the film does engage in some hand-holding for the heterosexuals, the screenplay is rife with dialogue that addresses issues at the heart and soul of the gay community in interesting and effective ways. If it ends up coming across a little flatter than it could have, then at least its heart is in the right place, and it’s an enjoyable watch. The fact that it is probably more enjoyable on the couch with a glass of wine than in a theater filled with a gaggle of gussied-up gays is a surprise, but ultimately not a bad one.