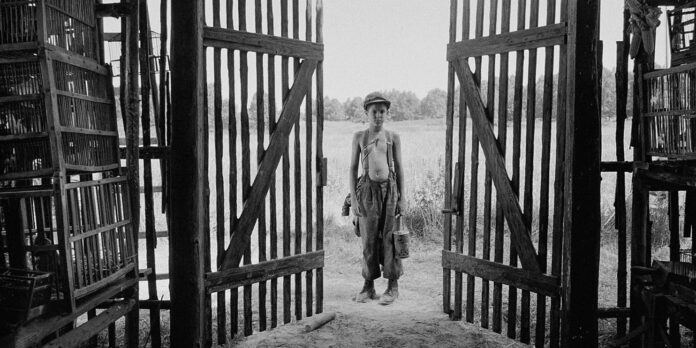 THE STORY – A young Jewish boy somewhere in Eastern Europe seeks refuge during World War II where he encounters many different characters.

​​​The Academy Awards are often a great platform for films to become discovered by a new set of audiences. For all the faults this institution has, it’s a valuable commodity in the ways in which certain films can find themselves in the conversation. It’s particularly important for smaller films, and that is an immeasurable strength for foreign cinema. There’s a noticeable spotlight once a film is selected to represent a country at the Oscars. At the same time, that attention can quickly fade away once it fails to make the final shortlist. “The Painted Bird” managed to get quite far in its journey to the Dolby Theater last year only to come up short in the end. All the same, it’s an incredibly interesting film with some fascinating explorations that do, unfortunately, crumble underneath its own ambitions.

Set during World War II in a fictional and unnamed Eastern European country, a young boy (Petr Kotlar) is living in the countryside with his elderly aunt. He’s been sent there by his parents in order to protect him from the invading Nazis. When his aunt dies, he embarks on a perilous journey back home and reunites with his family. He meets several new strangers along the way, but not all of them are benevolent. Some treat him with a modicum of kindness and sympathy, but many more find him on the receiving end of cynicism, brutality, resentment, and abuse. He crosses past one horrible incident after another in the hopes of finding solace in his home, though the scars built up along the way certainly take their toll.

There’s absolutely no denying how astoundingly well-crafted this film is on a technical level. The imagery that director Václav Marhoul utilizes is absolutely stunning, especially concerning the stark black-and-white cinematography. It defines this harsh world that also manages to be hypnotic in its visual storytelling. There’s a Grimm fairytale sensibility laid on top of a gruesome depiction of the atrocities of World War II. Yet it never feels tonally incongruous with these horrific events and instead enhances a textured layer. Nothing ever crosses into the realm of the fantastical, but its episodic nature lends itself to this perspective. This is why the filmmaking deserves much credit for keeping things so engaging despite how brutal the story becomes.

Still, the film doesn’t manage to maintain this sense of engagement all the way through. As with many stories that are split up into anthological chapters, some segments are more interesting than others and that’s very much the case here. Eventually, elements that were once so striking in the beginning start to become monotonous, repetitive, and overbearing. The momentum slows as the film progresses and the meandering nature becomes a hindrance to immersing oneself in this world. At nearly three hours, there isn’t quite enough here to sustain interest all the way through. Buried within this story are resonant themes about how systems of oppression in turn feed off of the repression of basic elements of humanity. There’s a look into the failing institutions of family, patriotism, religion, and politics corrupting the soul and it’s all very fascinating. Yet to what end is where many might find themselves struggling, and it’s a corner the film backs into and can’t escape. There’s a rich tapestry here that’s unfortunately spread too thin.

Kotlar is the constant presence in every moment of this film and there’s a quiet stoicism that’s impressive in such a young performer. There isn’t a great deal more asked of him, but considering the dense material he must navigate, he provides a sturdy anchor that’s commendable to watch. The supporting cast around him are decent players, but their limited screen time also restricts their impact. The most notable element is how many are brief appearances by well-known actors, ranging from the likes of Udo Kier, Barry Pepper, Julian Sands, and Harvey Keitel. However, their presence is ultimately very distracting and since many are dubbed, they don’t get to showcase much of their natural talent. It’s an oddity the film indulges in but one that detracts a great deal.

Despite many compelling elements on display here, “The Painted Bird” is a tough film to fully recommend. The themes it tackles regarding the horrid state of the world, and the influence it has on the vulnerable trying to survive, are fascinating to watch. It makes horrible events somewhat palatable and one can find a deep appreciation through the craft on display. At the same time, this commentary is stretched thin across its runtime and it doesn’t carry all the way through which contributes to its pacing issues and the momentum stalls toward the end. The totality of this piece is impressive but eventually suffocates under the weight of its own ambitious scope. Still, it’s an intriguing piece of work that deserves some kind of attention – lack of Oscar attention be damned.