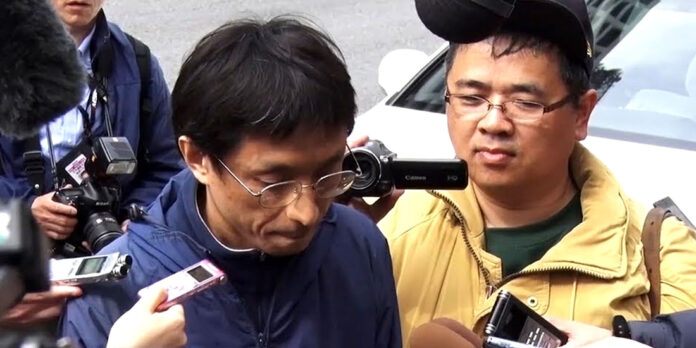 THE STORY – Atsushi Sakahara, a victim of the 1995 sarin gas attack in Tokyo’s subway system, travels with Hiroshi Araki, a member of the cult known as Aleph (formerly Aum Shinrikyo), the attack’s perpetrators. Together they visit their respective hometowns and the university they both attended.

​On March 20, 1995, Atsushi Sakahara became the victim of a sarin gas attack in Tokyo’s subway system, which led to the deaths of 13 people and over 6000 people left injured. To those who are unfamiliar with the 1995 terrorist attack, it was carried out by members of the cult movement Aum Shinrikyo, which was founded by Shoko Asahara. Sakahara himself was left with permanent damage and suffers from fatigue, paralysis, and PTSD. He’s been very vocal about speaking out against the cult as well as his own experiences with his ex-wife being a member.

It’s quite disturbing to discover that Aum is still operating in Japan – although it has since changed its name to Aleph – and continues to recruit despite it being public knowledge of what took place in 1995. One would expect Sakahara to be apprehensive of spending a great deal of time with a member of the cult, but instead of shying away from the confrontation, he makes the conscious decision to travel with Hiroshi Araki. Together they travel back to Araki’s home and revisit the university of Kyoto which coincidentally Sakahara also attended. It was at Kyoto University that Araki listened to a speech by Asahara and his life was transformed forever, leading him to denounce his family and join the cult.

Over the years there have been many documentaries about Aleph, Asahara, and what took place in March 1995; however, there hasn’t ever been such an impactful and moving documentary like “The Atonement”. Sakahara takes a blunt and direct approach with Araki, he’s not interested in his excuses about the cult and its leader, instead, he wants to penetrate through the defense layer that Araki has put up and make him understand that he’s responsible for his own actions. Araki is a tough person to read at first, especially when he introduces Sakahara to the headquarters of the cult. Briefly, we are given a glimpse of life inside the cult, where they devoid themselves of any comfort (opting to sleep on the floor) and flavor (they eat something called “Aum Soup”). Their belief is to “free themselves of flavor” but it seems like a very sad, pitiful existence and Araki is living proof of this.

The two men travel by bullet train to Kyoto, and it’s during this journey that we see a strange friendship emerging between the two. It has been fifteen years since Araki has been on a bullet train, the last time was when he visited his parents while recovering from a hospital visit, but since then he’s had no contact with them because Aleph forbids it. Sakahara tries to press Araki about his thoughts of the “Guru” and whether he was aware of the sarin attacks (Shoko Asahara denied all involvement). However, Araki seems reluctant to discuss the matter. (“The person who must explain is not available”.) It’s truly chilling to see the effects of brainwashing in action. Araki hardly seems like a real person, just an empty shell that has been denied his individuality.

As their journey continues, we begin to see the real Araki emerge. In one of the film’s most touching moments, we see the two men skipping rocks together like little boys and laughing about who can throw the stone the furthest. They also listen to music together on the train and looking at them you wouldn’t expect that one of them belonged to a cult and the other was a victim of the cult’s terrorist act. Araki begins to open up to Sakhara, breaking down at one point when they come to a train station in his Grandmother’s town – we’re told that the “memories don’t disappear…renouncing is hard work”. Slowly, as Araki reveals his upbringing and childhood, we begin to piece together a possible explanation as to why someone like him may have joined the cult. The need to feel complete, to feel like he belonged to something, that he had a purpose in life…these all played a key role in determining his participation with Aleph.

“The Atonement” makes for a fascinating and insightful watch. It’s also one of the most important documentaries to come out this year and an absolute must-watch. It’s a film that shows us the real side to life inside a cult, as well as depicting the aftermath of a life shattered by trauma. Sakahara approaches this subject matter from the unique position of being a survivor, and as a result, this film feels very personal rather than being a hard-hitting journalistic piece. We get the impression that this journey was just as therapeutic for the director as it was for Araki.

Hopefully by watching “The Atonement,” people feel compelled to start up dialogue and discussion with those in extremists groups and cults, not just in a religious sense, but in a broader social-political sense. If you take away anything from this documentary, let it be that it’s only through the power of communication and openness that any real change can occur.